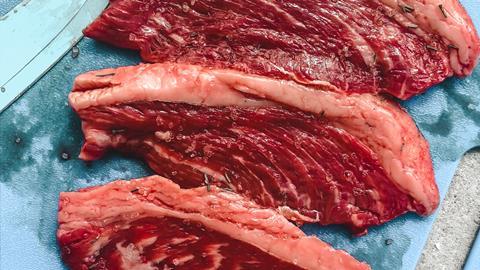 High steaks? Why the UK should relax use-by dates on meat

Just how safe is that steak on your plate?

That was the question ringing in the meat sector’s ears two years ago, after a surprise FSA visit to a Russell Hume processing plant sparked the latest in a long line of meat scandals.

At the heart of the FSA’s concerns back in 2018 was the “systemic and widespread” re-labelling of use-by dates on the wholesaler’s meat products, according to then-CEO Jason Feeney.

And the spotlight soon extended across the red meat sector, after a widening of the FSA’s investigation found a spate of similar instances at rival meat processors.

Incorrect use-by labels rang alarm bells for the FSA due to their potential to breach the regulator’s 10-day rule – which recommends chilled vacuum or modified atmosphere packaged meat stored at 3°C to 8°C be given a maximum shelf-life of 10 days.

But following new advice from the FSA’s main scientific advisory body last week, that rule could now be set to change.

The 10-day rule was set by the FSA because food safety experts believe it’s a safe margin to ensure C.botulinium (which causes botulism) doesn’t have the chance to grow and produce toxins.

However, the UK is the only country in the world to impose the 10-day rule, according to the British Meat Processors Association. It undertook research last year with Meat & Livestock Australia that claimed use-by dates could be safely extended beyond the FSA’s current recommendations.

The regulator’s “rigid application” of the rule disadvantaged UK meat companies, who often missed out on export orders or were forced to sell product at a lower price than overseas competitors, the BMPA said, because shorter shelf lives allowed buyers to negotiate the price down.

But samples of meat introduced to C.botulinium incubated at 8°C did not become toxic until day 50 for beef, day 35 for lamb and day 25 for pork, the research found.

These results supported an increase in the minimum shelf-life for processors, the BMPA claimed. And after a long campaign by the meat sector, the independent Advisory Committee on the Microbiological Safety of Food concluded there was evidence to extend its 10-day rule to 13 days at a meeting in London last Thursday.

With the spectre of Brexit still hanging over the meat sector, extending the 10-day rule is a welcome development, suggests BMPA technical operations director David Lindars.

“We’ve been unable to export meat in retail consumer packaging as the shelf-life wasn’t long enough,” he says. This adds more cost to the supply chain and makes it harder for retailers to plan their stock for spikes in demand, he points out.

What you need to know about use-by rules for meat

But processors are still disappointed by the outcome of the ACMSF’s findings, Lindars stresses, with the BMPA’s research showing extending shelf life to up to 21 days (for beef) would be perfectly safe.

“This is a restriction that is unique to this country and puts our industry at a severe disadvantage as it increases costs and food waste for the consumer,” he says. The ACMSF – an advisory board – has exceeded its remit in issuing such a “prescriptive” shelf life limit, he adds.

A decision will ultimately be down to the FSA board, on the advice of its own risk management group.

But the sector needs a relaxation of the rule “now more than ever” due to the challenges of falling meat consumption and Brexit on the meat sector, Lindars says.

Just days after the UK officially left the bloc, this debate over liberalising the rule perhaps points to the first in a series of calls to make UK manufacturing more competitive. Whether a cautious or more liberal approach wins out could decide whether Brexit is a success or a failure.