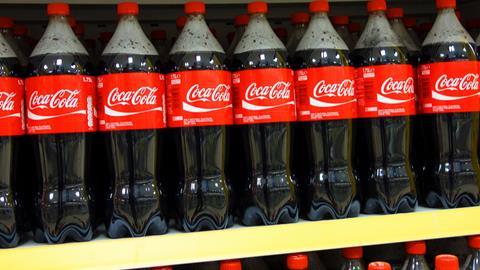 If Coke can stick to its plastic promises, it can make a real difference

‘Have a Coke and a smile’ was once the soft drink giant’s slogan. It was introduced in 1979 for TV ads brimming with the sort of toothy grins unlikely to be seen in downtown Atlanta this week.

That’s because The Coca-Cola Company posted a double-digit drop in annual sales after the Covid-19 pandemic brutalised the out-of-home market. Net revenues for the full year fell a frown-inducing 11% to $33bn (£23.9bn), with volumes down 7%.

Closer to home, the company’s bottler Coca-Cola European Partners reported similar woes. Full-year revenues dived by 11.5% to €10.6bn (£9.3bn) due to lockdowns, as volume sales across on-the-go and hospitality tanked by 27.5%.

Despite such misfortunes, Coke remains pretty upbeat. The supplier is “confident in its ability to gain share and consumers, maintain strong system economics, strengthen its reputation with key stakeholders and position the organisation to win” says its US HQ.

Hopefully, all that winning will include finally making meaningful gains in the war on plastic pollution. Coca-Cola this week announced it would begin using bottles made from 100% recycled plastic across its US portfolio – in a move expected to reduce use of virgin plastic in its packaging by more than a fifth.

That’s a good start to the new dawn Coke anticipates. But it will need to pick up the pace. And quickly. After all, the supplier produces about three million tonnes of plastic packaging a year, much of which ends up as an environmental hazard. CCEP has made good strides in the UK but Coke has been slower elsewhere to address the problem of plastic pollution.

That was after the company’s head of sustainability, Bea Perez, told the BBC it wouldn’t ditch single-use plastic bottles because shoppers still wanted them. “Business won’t be in business if we don’t accommodate consumers,” she said in January 2020.

No wonder there’s been more than a little scepticism about Coke’s latest green announcement. Greenpeace USA senior plastics campaigner Kate Melges, for example, this week lashed out at the company’s slow progress on plastic. “In 1990, Coca-Cola and Pepsi announced plans to sell their products in recycled plastic bottles,” she said. “The Washington Post quoted Greenpeace as ‘unimpressed’ at the time, urging the companies to eliminate single-use plastics altogether. Thirty-one years later, companies should not still be boasting about transitioning to recycled content. We remain unimpressed.”

But Coke can still win the approval of campaigners and eco-conscious consumers. That’s as long as it rests on its laurels no longer, but instead innovates and expands its sustainable solutions at pace. And it absolutely needs to take consumers along for the ride.

As Perez told the BBC last year: “As we change our bottling infrastructure, move into recycling and innovate, we also have to show the consumer what the opportunities are. They will change with us.”

It’s not just down to Coke. Retailers have a role to play in helping educate and influence consumers, as well as keeping pressure on Coke and its rivals to do the right thing. Then maybe – just maybe – the post-Covid future really will see something to smile about.