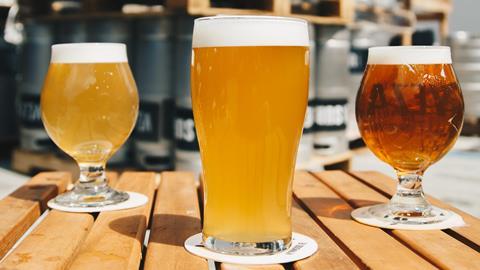 Buying’s a dying art, the experts claim. Either the profession’s been hijacked by data-driven robot teenagers with no genuine category experience or handed to uninterested cost-cutters. It just depends whose turn it is to whinge.

Except this isn’t categorically true. Even in the age of data and range rationalisation, there are still those genuinely driving their categories forward.

Tesco just implemented arguably the most radical update to its beer range since it chucked out 30 Heineken SKUs back in 2017. It’s drafted in some seriously experimental products (at least compared to your garden-variety supermarket craft fare) and has placed the 440ml craft can (which until now was largely relegated to indies and bottle shops) centre stage.

What’s interesting is that Tesco’s beer buying manager Dom Hill, understood to be the driving force behind this update, has embraced public profile – and genuine consumer engagement – in a way few buyers do. His Instagram (complete with over 2,500 followers) is a veritable encyclopaedia of beautifully-shot brews, and he has used it to drive discussion and excitement in the lead up to the range update.

It’s quite a feat to turn something as menial as the swapping of cans around on a supermarket shelf into an event of genuine significance (outside the trade press, that is), but Hill has seen the potential in doing just this.

He is also active in Facebook’s craft beer community, a notoriously pedantic and cynical corner of the internet (where since the range went live, it has been largely lauded). In the lead up to launch day, he revealed one brewery Tesco had partnered with every day – the hype was substantial.

Read more: How can ale survive the craft beer onslaught?

And he took serious flak from craft’s keyboard warriors when it wasn’t available across 100% of Tesco’s estate from launch day. Which was undeserved, considering buyers aren’t responsible for delivering the actual booze to shops. Go figure.

Hill’s approach is interesting because it puts the buyer back in the picture as a connoisseur – someone whose opinion is valuable not just on the basis of their position, but because they have done the research and genuinely engaged with the fanbase.

Most importantly, this level of transparency gives the finished range a level of credibility yet unseen in supermarket booze. It’s also interesting to note that Tesco worked personally with some of the brewers to develop exclusive, high-end brews for the update – it hasn’t previously taken as hands-on an approach to production in craft beer.

The only issue will be whether, having made such a striking commitment to craft, Tesco can actually shift enough of it to get a satisfactory payday – 7.5% DIPAs are about as far from mainstream as you can get. If Budweiser is the Ed Sheeran number one single of the booze aisles, then Thornbridge’s Yelamu is a 20-minute noise-rock symphony by experimental metal band Sunn O))).

None of this is rocket science. Some of it is basic social media marketing. But at a time when data and big corporate supply deals are often alleged to be superseding creativity, there’s a refreshing touch of the old school to Hill’s (and Tesco’s) approach to craft. Perhaps the days of the ‘rockstar’ BWS buyer aren’t as numbered as we may have previously thought.