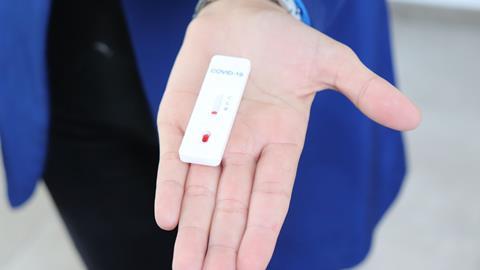 Will new Covid testing scheme prove any better than what companies already have in place?

A week used to be a long time in politics. These days it seems like a lifetime.

This time a week ago, food industry leaders were in full on crisis mode amid emergency talks with government, slamming delays in the response to the so-called ‘pingdemic’ as it threatened to combine with long-standing labour shortages to cause widespread food supply problems.

Now, with infection rates seemingly in freefall, the big question is whether the government’s solution to the crisis will go ‘ping’ and disappear in a puff of smoke, far quicker than it took to dream up.

At the beginning of this week there were extraordinary scenes as NHS Test and Trace bosses addressed an invisible audience of who knows how many food and drink companies in a webinar about how its new Daily Contact Tracing (DCT) system would work.

Workers will be offered seven days of daily lateral flow device tests (LFD) in the workplace. Staff who test positive have to self-isolate but will also be offered a more accurate PCR test to double check.

Defra has contacted companies at what it regards as the 500 most vital sites in the supply chain, offering staff the chance to accept seven days of daily tests as an alternative to self-isolation if they are “pinged” by the NHS app.

The induction and education programme to the scheme, which has been accompanied by plenty of controversy, is set to go on all week and beyond. Companies being asked to sign up to legal commitments on training, data and workforce safety if they are to become part of the solution.

However, the serious amounts of red tape and complexity involved in the testing regime has raised question marks over the extent to which the scheme will take off. Especially combined with the falling number of cases.

One senior source even suggested if the situation was like it is today, ministers wouldn’t have launched the scheme at all.

It follows previous rollouts of asymptomatic testing among food companies that similarly struggled to gain mass support. Thus far at least, testing has not proved to be anything like a silver bullet to protect food suppliers.

Word is many companies, in the previous absence of government schemes, have already come up with their own solutions to the pingdemic. That’s not surprising, given the moral and legal ambiguity that was always going to be associated with a “freedom day”, which arrived without the clarity and detailed guidance many in the industry had long called for.

There are also concerns about transparency and competition with DCT – notably just who got to decide which companies should make the list.

Still, hopefully the exercise will not prove to be totally in vain. If we do encounter another wave in the autumn, as many still gloomily predict, it could at least lay the foundations for testing to help towards preventing the fully fledged staffing crisis, which has not yet – thank goodness – got as bad as some predicted.

That is, of course, apart from in the HGV sector, where talks rumble along on a seemingly endless road.

At least Tesco has come up with an old-fashioned answer, with its plan to give lorry drivers a £1,000 cash bonus if they join the company before the end of September.

Forget convoluted testing schemes, the power of the cash bonus is still where it’s at. Although given the shortages, it looks highly unlikely that a thousand quid in the back pocket is going to be anywhere near enough.