Cereals miss out on breakfast's rebirth

Breakfast is back! Fewer people are giving their morning meal a miss, we revealed earlier this year 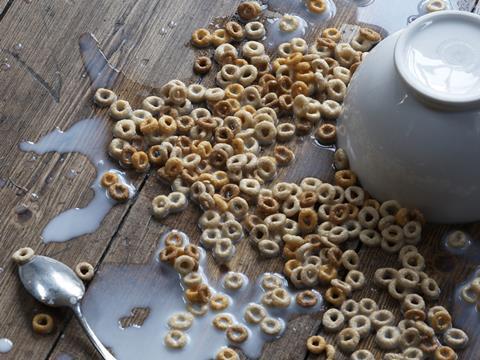 Breakfast is back! Fewer people are giving their morning meal a miss, we revealed earlier this year, with 600,000 fewer Brits skipping breakfast on a weekly basis. Trouble is, makers of cereals are yet to see any benefit.

Sales of breakfast cereals are down 5.5%, a fall of £77.6m resulting partly from the supermarkets’ policy of piling high and selling cheap in an effort to claw back market share lost to the discounters. Volumes have fallen 3.4%. That’s the equivalent of 3.5 million fewer kilos of cornflakes and the like.

It hasn’t helped that more Brits are starting their day with an on-the-go option rather than sitting down for brekkie. Cereal brands have been slow to respond. Weetabix is the only brand in the top 15 to have seen growth, thanks chiefly to NPD such as the launch of a protein variant - while Weetabix’s breakfast drinks are now worth £13.6m and growing at a blistering rate.

But a fightback has begun. “Decline is slowing because manufacturers are beginning to innovate and invest. We’re looking to packs that reflect the out-of-home lifestyle,” says Toby Baker, Nestlé Cereal Partners marketing director. There will be a lot more focus on portable and smaller formats in the coming 12 months, he adds. They’re right to focus on convenience and portability, says Tom Mercer, founder of ready mixed bircher muesli brand Moma.

“Almost half the UK adult population doesn’t eat breakfast at home every day and instead eats at their desk or on the go, with 13.2% of breakfast occasions bought from convenience or out-of-home establishments.”

Satiety will continue to inform NPD. One of Nestle’s big launches this year was Shreddies Max, a granola mix that offers 13g of protein per 100g (compared with the 10g provided by original Shreddies). It made its debut in August, eight months after Weetabix unveiled Protein biscuits to go up against Fuel10K’s Protibricks - which reformulated to add still more protein.

Whether next year sees reformulation of existing recipes to reduce sugar levels is moot in light of government pressure, particularly with the revelation last month that recipes for leading brands in other countries use less of the sweet stuff, and Waitrose has already been taking action in own label.

But health takes many forms. “With 15% of consumers now buying gluten-free, there is considerable appetite for free-from options,” says Mercer.

Kellogg’s brand manager Louise Thompson Davies believes health needs to coincide with “the modern lifestyle”, noting that “31% of consumers have health as their primary driver”. But it’s Belvita, marketed as a healthy on the go option, that provides the ultimate proof. And it’s not a cereal.