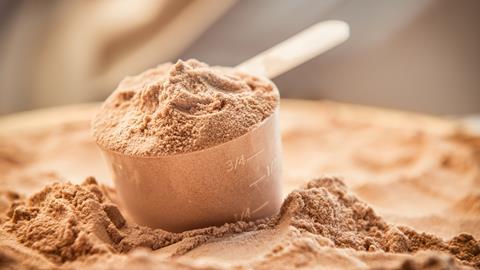 Hitting the gym is optional in today’s protein market. A high number of consumers are tucking into bars and shakes without doing any exercise. That presents a huge opportunity for protein to diversify beyond its core audience, which remains skewed towards men.

This research was commissioned by The Grocer and carried out by Him independently from Grenade.

1. Over a fifth of consumers eat a protein bar once a week or more 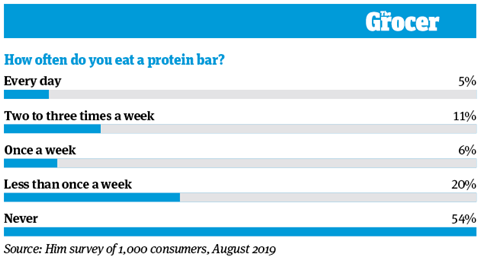 Around half of consumers say they never eat protein bars. It may not sound like anything to shout about but – considering sports nutrition was once a niche area – a 46% penetration rate is actually pretty encouraging.

That contrasts sharply with older consumers. Among the 55 to 64-year-old age group, only 10% will consume a protein bar weekly. And 66% never buy into the market at all.

Interestingly, consumers interested in healthy eating are more likely to buy protein bars. A third of those who ensure every meal they eat includes fruit or vegetables will snack on a bar at least once a week. 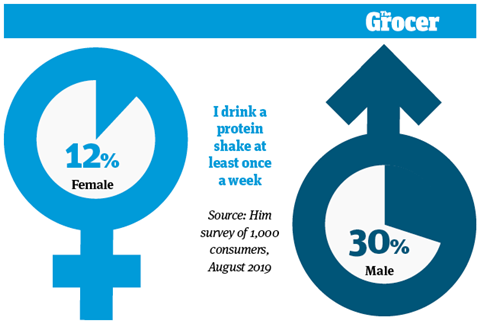 The sports nutrition market has traditionally been male-dominated. So it’s perhaps not surprising that more than twice as many men regularly drink protein shakes than women. Three quarters of women never buy protein shakes, compared to 58% of male respondents.

That demographic split is similarly apparent in protein bars. A third of men will consume them at least once a week, compared to just 14% of women.

However, Grenade says this gender bias is changing. “Historically, the protein market has been more male-dominated, which has been driven by protein being used as a sports supplement and its connection with heavy gym use,” says head of category Mike Simons. “However, the profile has changed considerably and we’ve seen a rapid influx of female consumers.”

3. Morning is the most common time to consume a protein product 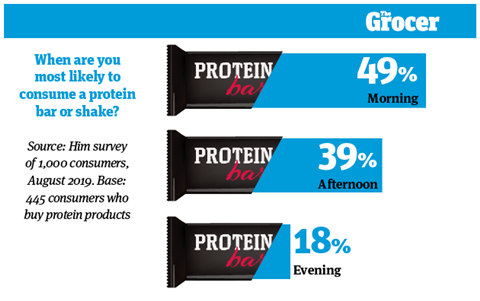 The first half of the day is the most important in this market. Morning is the most common time for consumers to down a protein shake or tuck into a bar.

Grenade’s Simons says this is down to perceptions of protein as a pick-me-up. “We know there are strong links between purchases of our products and coffee and energy drinks,” he says. “During the morning, this is often as a convenient replacement for breakfast for time-poor consumers on the go.”

This seems to be particularly true of time-pressed Londoners. Just over six in 10 consumers in the capital favour the morning as the time to consume protein, while just 14% do so in the evening. 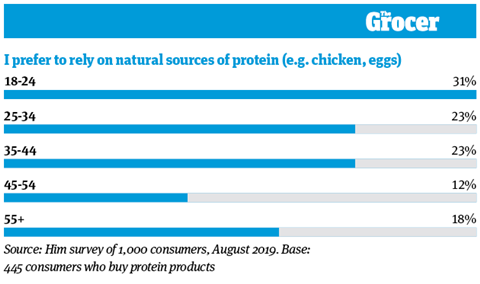 Bars and shakes aren’t the only way to up your protein intake. Protein-conscious consumers are also turning towards naturally protein-rich foods such as chicken and eggs. So much so that British Red Lion is focusing on the protein content of eggs for National Egg Week in October.

This message may well resonate with consumers. A quarter of protein shoppers say they prefer to get their protein from natural sources, as opposed to bars and shakes.

That is particularly true of younger consumers. Nearly a third of 18 to 24-year-olds say they veer towards natural protein sources, compared to just 12% of the 45 to 54 age group.

This insight could have implications for bars and shakes, too. A third of consumers say they prefer products with natural ingredients and no artificial colours or sweeteners.

5. Less than a fifth of consumers will only eat protein products for exercise purposes 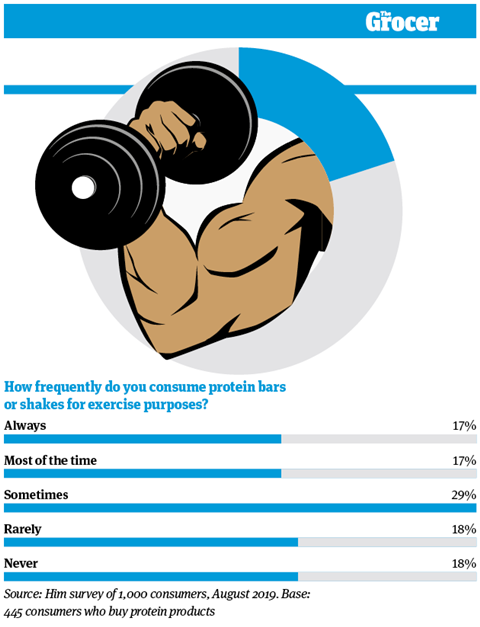 The appeal of sports nutrition has gone way beyond exercise buffs. That much is evidenced by the sheer number of consumers who tuck into protein products without doing exercise.

Only a fifth of protein consumers say they consume bars and shakes exclusively for exercise purposes. And a sizeable proportion of the market – 36% – says their consumption is rarely or never connected to a workout.

Again, this relates to the wider uses for protein products other than pumping iron. Only a fifth of protein consumers believe bars and shakes improve their sports performance. A higher number – 28% – think protein products give them energy.

There is a slight gender bias in the link between protein and exercise, though. A quarter of female consumers say they never have a protein bar or shake for workout purposes, compared with just 14% of men.

Older consumers are also more likely to chow down on protein for reasons other than sports nutrition. Half of consumers aged 55-plus never choose protein for exercise purposes.

6. Nearly half of consumers will look at protein content 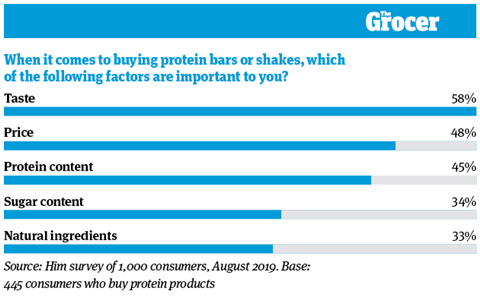 Even in the functional world of sports nutrition, taste is a primary concern for shoppers. Protein content – arguably the main selling point of these products – comes a mere third in importance after taste and price.

Not far behind are sugar content and natural ingredients, cited as important by a third of protein consumers. And a fifth say they look for convenient formats.

Taste is particularly important to women, of whom 66% named it an important factor. That compares with just 52% of men.

Meanwhile, men were more persuaded by a convenient format. It was cited as an important factor by 27% of male respondents, compared to 18% of female. Men came out as slightly more interested in protein content, too.

7. But a quarter don’t know how much protein a product should contain 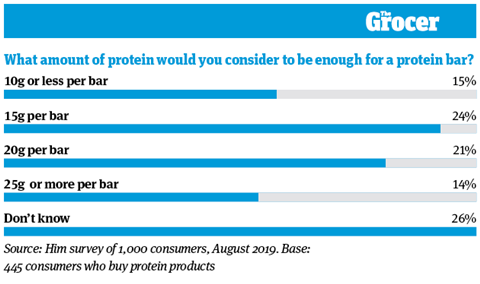 Protein content may be important to half of consumers in this market, but there remains widespread confusion over how much a product should contain. A quarter of consumers admitted they didn’t know, while roughly half thought it should be between 15g and 20g.

Considering most bars on the market pack in around 20g of protein, they’re not far off. But the figures below suggest there is a need for education around protein content and exactly how much to expect.

That’s especially true among certain demographic groups. More than three in 10 women said they didn’t know much protein a product should contain, compared to two in 10 men. And half of over-55s admitted to having no clue on protein content, compared to 10% of under-35s. 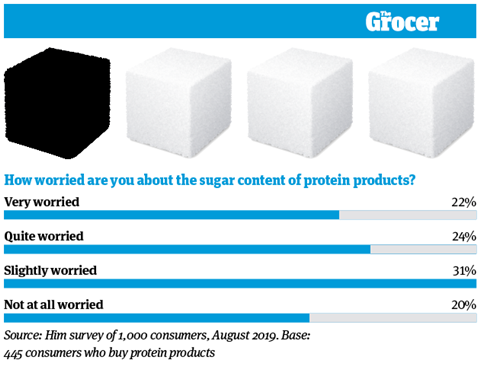 Sports nutrition is all about a healthy lifestyle. So the last thing protein products want is to be associated with high levels of sugar.

Products on the market have worked hard to offer a sweet taste without too much of the white stuff. The majority of bars will contain less than half a teaspoon of sugar.

Grenade’s Simons says that low sugar is a “fundamental part” of the protein bar proposition. That was based on consumer attitudes. “Sugar levels have been the primary health concern amongst shoppers for quite some time, and this continues to be the case,” he says.

These concerns are showing in the data. Despite the low sugar credentials of protein products, three quarters of respondents to our survey were at least slightly worried about their sugar content. And a fifth went as far as being ‘very worried’.

These concerns were particularly pronounced among the 35 to 44-year-old age group. Among this demographic, three in 10 said they were very worried about sugar content.

In terms of region, Londoners were most likely to be wary of their intake. A whopping 35% of the capital’s residents said they were very worried about the sugar content of protein products, and 28% were quite worried.

9. Protein bars are still seen as healthier than confectionery 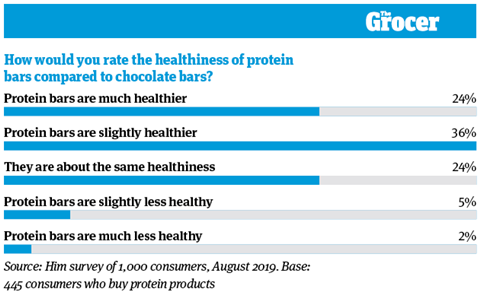 Despite all these sugar concerns, protein bars are still seen as more virtuous than your standard chocolate fix. Six in ten agreed they were somewhat healthier than a chocolate bar, while only three in 10 thought they were the same or less healthy. And a quarter deemed them ‘much healthier’.

As always, there are demographic differences within these perceptions. A substantial 31% of men agreed they were much healthier than chocolate, compared to 16% of women.

Older consumers were also a little warier of the health credentials of protein bars. Only 8% of over-55s agreed protein bars were much healthier than their chocolatey counterparts. That compares with 48% of the under-35 age group.

That’s perhaps unsurprising, considering older shoppers are most worried about the sugar content of these products.

10. Men are more likely to be loyal to a protein brand 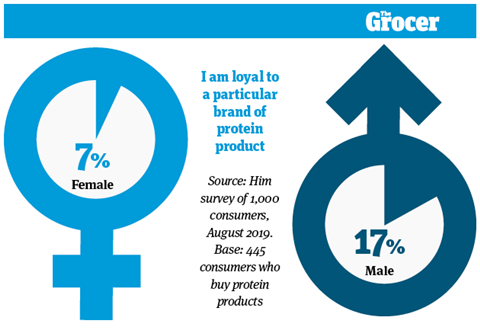 Overall, only 12% of consumers are loyal to a particular brand of protein product. That is fairly low, especially for such a brand-heavy market.

Some consumers are more attached to brands than others, however. Nearly a fifth of men said they were loyal to a particular name, compared to just 7% of women.

That stands to reason given the gender bias in the protein market. Because the groups most engaged with the market were the most likely to show loyalty. An encouraging 25% of the 25 to 34-year-old age group – the group most likely to buy protein products – had a preference for one brand.

And London, the most protein-loving region, was also particularly loyal. A quarter of consumers in the city favoured one brand.