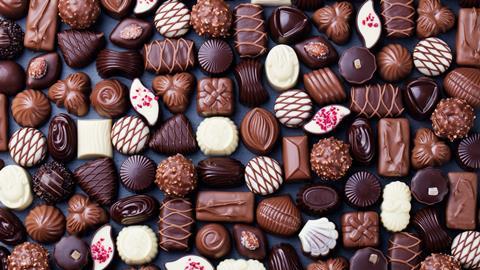 The UK’s appetite for chocolate shows no sign of waning. Still, today’s shoppers want a bit more from their confectionery. From sustainable packaging to lower-sugar variants and smaller portions, we examine the latest consumer demands.

This research was commissioned by The Grocer and carried out by Kantar’s Research Express service independently from Mondelez International. 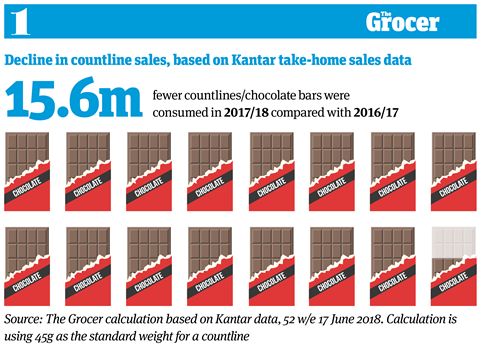 The humble countline is in a long-running decline. Although still the largest sub-category in chocolate – worth nearly £500m [Kantar 52 w/e 17 June 2018] – consumers are moving towards other formats. That saw countline volumes decline from 74 million kg to 73.3 million kg within that period.

That’s partly down to snackers choosing options other than chocolate – for example, protein and healthy snack bars. According to Kantar, chocolate was down 4.1% in snacking occasions, despite consumers snacking more regularly.

But it’s also indicative of the rise in other formats such as sharing bags and boxes. For example, chocolate boxes shot up 6% in volume terms, selling 29.4 million kg. And when consumers do indulge in chocolate, there is a move towards more premium options.

2. But over half of UK adults eat chocolate more than once a week 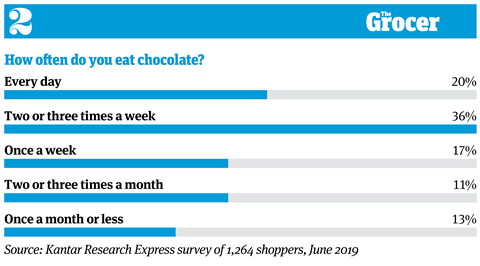 Countlines may be down, but that doesn’t mean Britain’s appetite for chocolate is waning. Indeed, 56% of consumers indulge more than once a week. And only 3% say they never eat chocolate at all.

Chocolate consumption is particularly high among the supposedly more health-conscious generation: the 25 to 34-year-olds. In this age group, a whopping 34% say they eat chocolate every day. By contrast, only 8% of 65-plus consumers replicate that daily habit.

Consumers with young children are another driver of frequency. A third of shoppers with children under the age of two eat chocolate on a daily basis – a figure that declines as children get older. Those without children are the least frequent consumers, with 15% eating chocolate every day compared with 31% of parents overall.

3. Just under half believe there is a large amount of choice available 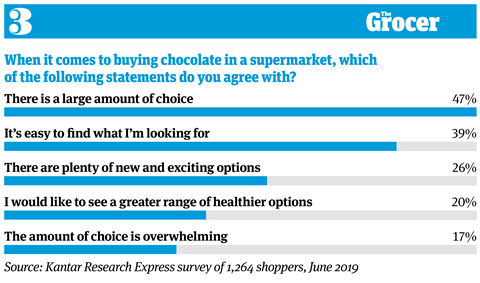 Chocolate ranges have never been more extensive. Today’s offerings include everything from vegan chocolate with coconut milk to reduced sugar options and 100% cocoa variants. Yet just 47% of consumers polled believe there is a large choice available – meaning there are 53% who don’t agree with that statement.

Susan Nash, trade communications manager at Mondelez International, says chocolate needs to cater for wide-ranging preferences. “Confectionery needs to meet a range of needs of shoppers, from Generation Z who are looking for excitement through to more mature consumers looking for more familiar, heritage brands they know and love,” she explains.

There is a difference between how the different generations perceive the level of choice, too. While just 35% of 25 to 34-year-olds believe there is a large amount of choice, that rises to 55% among 65-plus shoppers. 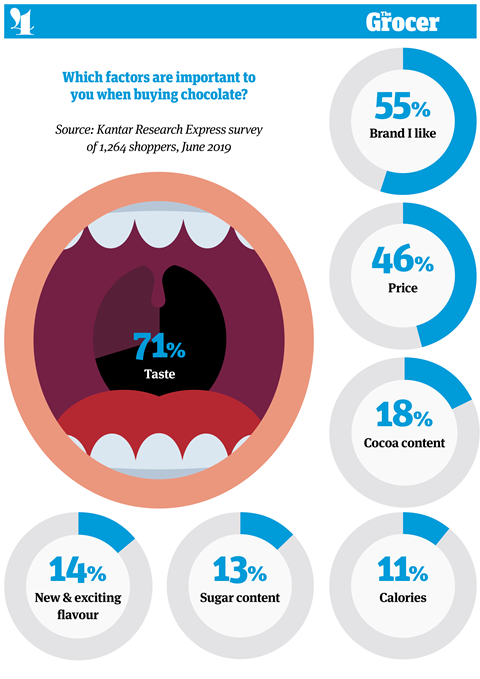 With all the hype around sugar – and the introduction of the soft drinks levy in 2018 – you would expect sugar to be fairly high up on the consumer agenda.

However, when it comes to chocolate, there are far stronger influences at play. Unsurprisingly, seven in 10 say taste is an important factor, but price, cocoa content, brand and new flavours also come above sugar content in terms of priorities. Only the 25 to 34-year-old age group put sugar ahead of cocoa content.

Mondelez’s Nash says the figures reinforce “the importance of taste in this ‘treat’ category”.

“While reducing sugar is, at a total level, highly motivating to consumers, it can’t be at the expense of taste when it comes to confectionery and other treats,” she says.

Indeed, taste was by far the most important factor across all demographics in our consumer poll. 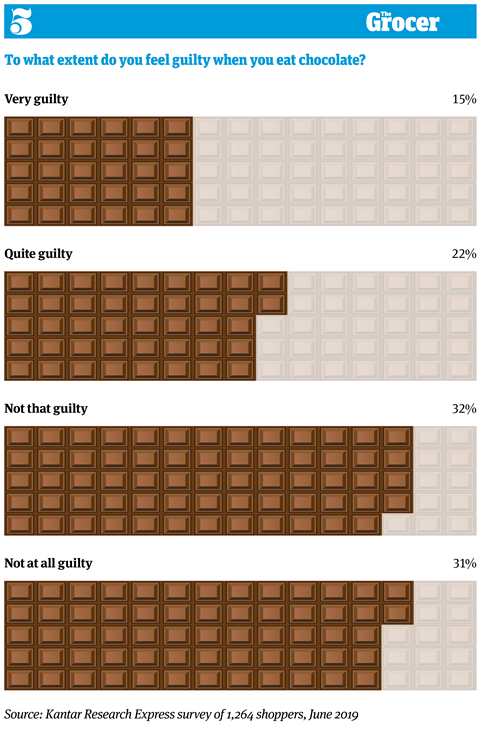 Here comes the classic guilt factor. While consumers want something indulgent enough to tickle their tastebuds, it’s that indulgent nature that often causes a certain pang of guilt.

So it’s little surprise that 37% of consumers feel somewhat guilty about eating chocolate.

This varies pretty wildly by demographic, though. A whopping 58% of 25 to 34-year-olds – the most frequent consumers of chocolate – feel some form of guilt. And a sizeable 31% go as far as saying they feel ‘very guilty’.

There is also a bit of a gender divide at play. While 41% of women said they felt some level of guilt about eating chocolate, 31% of men said the same. And 38% of male respondents said they felt ‘not at all guilty’, compared with just 25% of female shoppers. 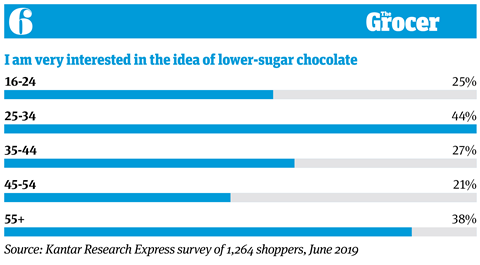 Over a third of 25 to 34-year-olds eat chocolate every day. So it’s perhaps unsurprising that they are the most interested in the concept of lower-sugar chocolate. A staggering 44% said they were ‘very interested’ in the idea, compared with just 26% of the overall sample.

There were also some geographical differences in appetite for lower-sugar fare. While 50% of Londoners were very interested, that fell to just 18% in the north east. Indeed, 29% of respondents in the north east just weren’t really open to the idea.

Mondelez’s Nash believes it is important to recognise that lower-sugar variants won’t be for everyone. “Our team of scientists has worked tirelessly to create great-tasting 30% less sugar options,” she says. “However, we believe some consumers will prefer the standard recipes, so it’s important to offer choice.” 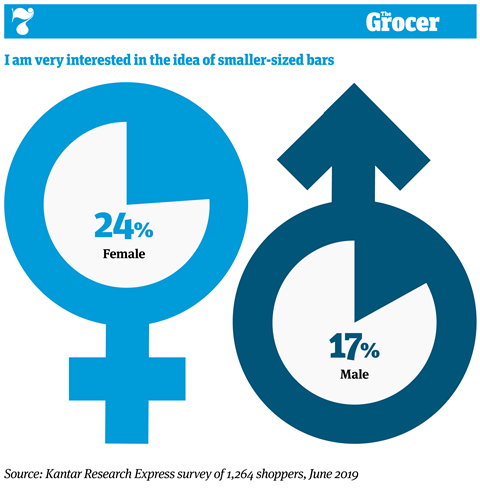 For those who don’t want a change in recipe, portion-controlled bars are another way to manage calories and sugar consumption. A number of confectionery giants are debuting smaller portions, including Mondelez with its Cadbury Dairy Milk Mini Bars.

However, the figure was higher among female respondents, of which nearly a quarter were very interested. And among the 25 to 34-year-old age group, that figure rose to an decidedly encouraging 44%.

8. Chocolate is seen as more of a treat than sweets

On the face of it, you’d expect chocolate and sweets to have relatively similar treat values. In fact, there is a slight difference. While 43% of consumers think of chocolate as a treat, 35% of respondents said the same about sweets.

Perceptions do seem to depend on how often consumers enjoy chocolate and sweets, though. A sizeable 57% of consumers who eat chocolate every day think of it as a treat. A similar pattern can be seen for sweets. Among those who eat sweets every day, 53% see them as a treat. Which shows a daily habit can still be seen as a treat if you love your confectionery.

Children are another factor influencing perceptions. Among respondents with kids aged under two years old, 54% agreed chocolate was a treat and 53% said the same about sweets. Parents of older children were less likely to have a treat mentality and non-parents were least likely. 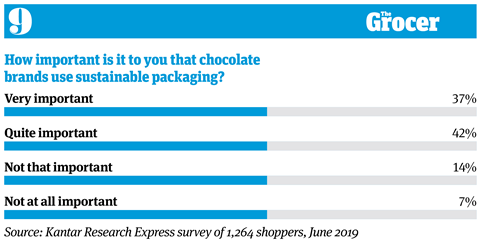 The issue of sustainability is rarely out of the headlines. So it stands to reason that shoppers are scrutinising confectionery packaging more than ever before. Nearly four in 10 shoppers say sustainable packaging is very important to them when choosing a chocolate brand.

Nash says sustainability is becoming “increasingly important” to shoppers. “From sourcing through to labelling and packaging it’s important we are doing and making things responsibly, while working to continuously improve what we do.”

10. Londoners are particularly interested in the ethics of chocolate brands 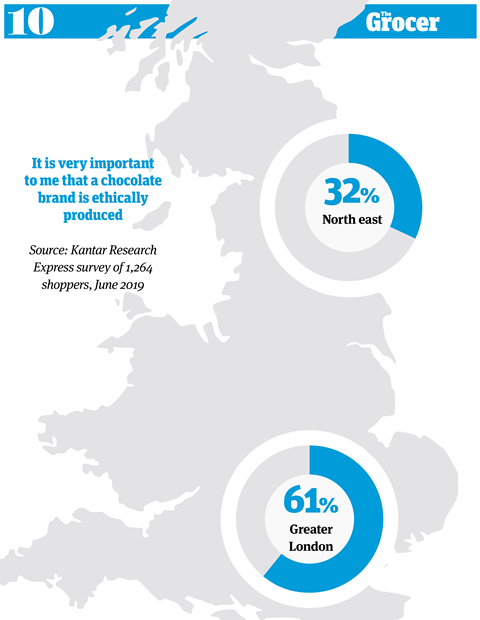 On the same note, ethical sourcing is becoming a hot topic among consumers. Overall, 41% of respondents said ethical production was ‘very important’ when buying a chocolate brand, and 40% deemed it ‘quite important’.

Interestingly, there were some real geographical differences in terms of importance. Almost twice as many Londoners deemed ethical production very important as respondents in the north east.

A similar pattern emerged when it came to sustainable packaging. In London, 59% of shoppers named this as a very important factor compared to 26% in the north east.

So if you want to tempt shoppers in the capital, recyclable packaging and a clear ethical policy may just be vital.