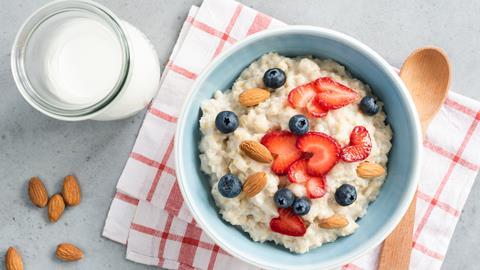 The bad news? Nearly a quarter of Brits skip breakfast every day. The good news? Time-pressed consumers are fuelling the market for on-the-go options. Products that tick the health and convenience boxes are booming – but there’s still plenty of love for a full English. 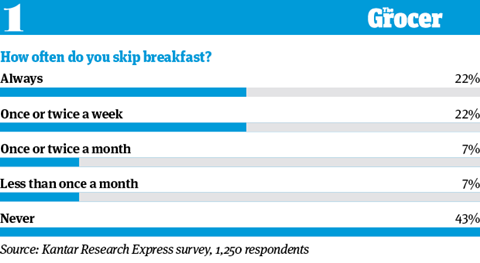 Breakfast may be deemed the most important meal of the day, but many consumers aren’t taking note.

Nearly a quarter always skip the breakfast occasion, according to our poll, and a further quarter will give it a miss once or twice a week. That means 44% regularly refrain from eating in the morning – higher than the 43% who will never give up their breakfast.

There are some demographic differences in this behaviour. Time-pressed parents are more likely than most to go hungry in the morning. A sizeable 27% say they always skip breakfast, compared to 20% of non-parents.

In terms of regions, busy Londoners are more likely than the rest of the country to go without. Just over a quarter miss the occasion every day, compared to 18% in the north east of England.

But the most likely to miss the meal are the 35 to 44-year-old age group. A whopping 30% of this demographic will always skip the occasion, compared to just 12% of over-65s.

This largely retired group is a particular champion of breakfast, perhaps because they have more time to enjoy the meal. Indeed, two thirds of the 65-plus age group say they never miss out on brekkie.

For many, skipping breakfast sounds like a recipe for a rumbling stomach. Not everyone feels this way, though. Nearly half of the 738 respondents who skip breakfast do so because they simply don’t feel hungry.

Still, the motivation varies fairly significantly by age. Older generations are more likely to forgo their breakfast because they don’t have hunger pangs. Meanwhile, younger consumers are more likely to skip the first meal of the day due to time constraints.

Nearly half of 16 to 24-year-olds who miss breakfast do so because they say they don’t have enough time. That compares with just a fifth of over-65s.

Similarly, 17% of the youngest age group say their primary motivation is to have more time in bed. By contrast, only 4% of over-65s said the same.

3. Younger consumers are more likely to eat breakfast on the go 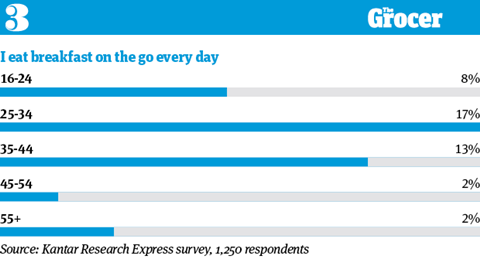 Given that younger consumers are harder pressed for time (and lie-ins) it’s no wonder they are fuelling the on-the-go market. Nearly a fifth of 25 to 34-year-olds eat breakfast on the go every day and half will do so at least once a week. That figure falls to just 6% of 65-plus consumers.

Susan Nash, trade communications manager at Mondelez International, says this is down to younger consumers leading “increasingly busy and diverse lifestyles”. “This means the breakfast occasion is expanding, taking place at any time from early morning up until lunch and anywhere from home, at the office or on the go,” she explains.

4. Cereal bars are the most popular on-the-go option 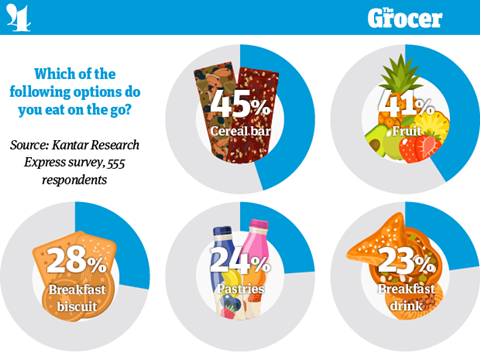 On-the-go breakfast items are enjoying a surge in popularity. Kantar data shows ‘breakfast alternatives’, which include cereal bars, breakfast biscuits and toaster pastries, rose 5.4% to £466m in the past year. According to its figures, cereal bars make up three quarters of that market.

Our consumer poll bears that out. When it comes to convenient on-the-go options, cereal bars are leading the way in popularity. Indeed, they were the top option among all ages except 45 to 54-year-olds, who named fruit as their preferred option.

Among the total sample, fruit followed closely behind cereal bars. Breakfast biscuits were in third place, just slightly ahead of pastries and breakfast drinks. The sheer number of people buying into the top five options shows there is room for a variety of on-the-go options.

While convenience is the most vital attribute in this arena, Mondelez’s Nash says a successful product must also take into account other trends.

“Taste is still a highly important purchasing factor, and consumers are becoming more health-conscious when it comes to breakfast too,” she says.

5. A quarter of Londoners eat a cooked breakfast every day 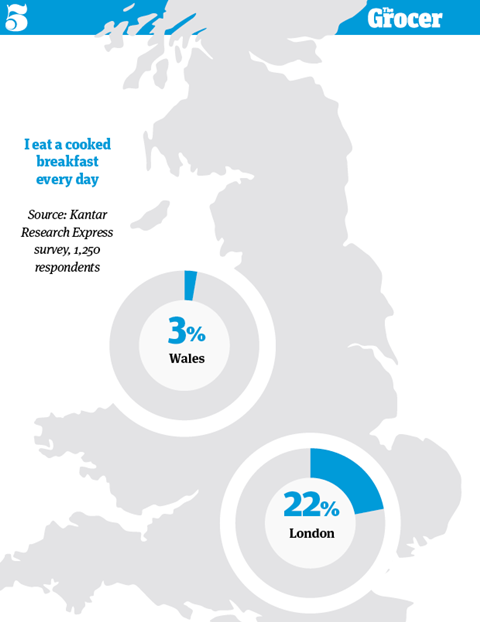 You might expect Londoners to be shunning cooked breakfasts. After all, their hectic schedules make them more likely than other regions to skip the meal altogether.

Yet somehow, nearly a quarter of the capital’s residents manage to cram in a hot breakfast every morning. That compares to just 3% in Wales and 5% in the east and west Midlands.

Another interesting point to note is the age split. A fifth of 25 to 34-year-olds eat a cooked breakfast every day, compared to just 4% of the 45 to 54-year-old age group.

6. The fry-up is the most popular hot breakfast 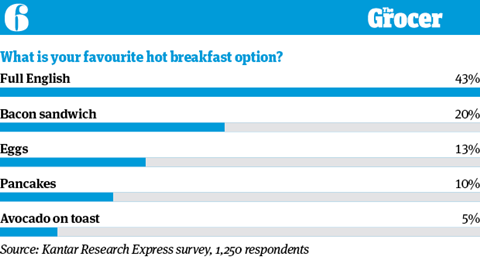 With all the buzz around avocado toast, you may expect it to have surpassed the full English as the nation’s favourite hot breakfast option. That couldn’t be further from the truth.

The fry-up remains the most popular option by far, taking the top position among more than four in 10 respondents. Meanwhile, avocado toast is lingering in fifth place, as only 5% of respondents named it their favourite hot breakfast.

Interestingly, this doesn’t differ much by age group.

The stereotypically avocado-loving younger generation is just as keen on a fry-up as their older counterparts. A sizeable 41% of 25 to 34-year-olds named the full English their favourite, a sentiment that was replicated by exactly the same percentage of 65-plus consumers. The avocado toast isn’t that much more popular among younger generations, either – named a favourite by 6% of 25 to 34s compared to 3% of over-65s.

7. Energy is a high priority for breakfast 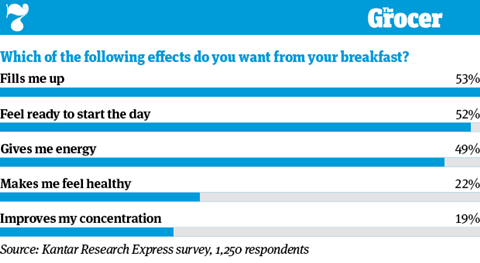 It’s no surprise that ‘filling’ was named one of the main priorities for breakfast. ‘Feeling ready to start the day’ and ‘gives me energy’ come a close second and third.

There are certain demographics who will appreciate this benefit more than others. Among the 25 to 34-year-old age group, 55% wanted a breakfast that gave them energy. That compares with 43% of 45 to 54-year-olds.

Health was another important motivation, cited by nearly a quarter of respondents. Here, there was a gender divide – 27% of women said it was important compared to 17% of men. 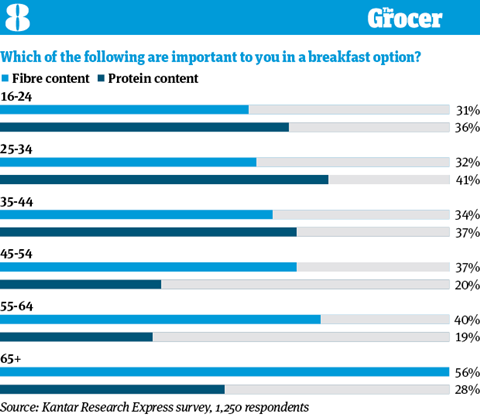 Could fibre be the new protein? Dieticians believe so. Especially as the average Brit consumes just 18g of fibre a day – half the recommended intake of 30g.

But when it comes to breakfast, younger consumers simply aren’t buying the fibre message. Only 31% of the youngest age group said fibre was important to them in a breakfast option, compared to 56% of over-65s.

By contrast, older generations seemed less fussed about protein, which was a primary concern among 25 to 34-year-olds.

There are some interesting demographic differences outside of age, too. Londoners seemed hotter on nutritional content as a whole.

Fibre and protein were both important to nearly half of respondents in the capital. Yet up in Scotland, only 34% wanted fibre and 26% thought protein was important.

Overall, fibre and protein were the main considerations when it came to nutritional content. But there were other factors at play. More than a quarter of respondents cited calorie content as important and 23% said the same for vitamin content. Plus, a fifth were concerned with the amount of sugar in their breakfast.

Again, all of these elements were particularly important to respondents living in London.

9. Parents are particularly concerned about a healthy breakfast 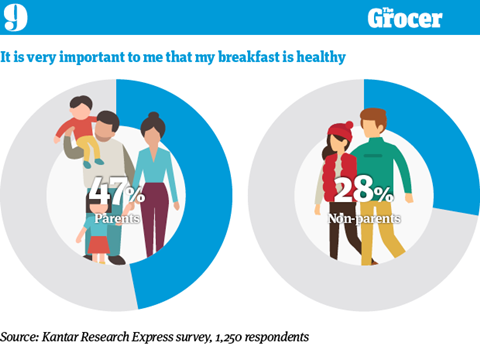 Parents are typically a time-pressed bunch. So much so that they are more likely to skip breakfast altogether than those without children.

But when they do make an effort, they are generally concerned over what they are putting into their bodies. Nearly half of parents deemed it very important for their breakfast to be healthy, while just over a quarter of child-free respondents said the same.

It comes as no surprise to Mondelez. “Consumers want to start their day with a breakfast option that is nutritious and gives them sustenance,” says Nash. “This especially applies to parents who want healthier options for the whole family.”

Parents aren’t the only ones who are overly concerned with health. Nutrition-conscious Londoners are also more likely to want a virtuous breakfast. A whopping 58% said a healthy breakfast was very important to them.

Younger consumers are also more likely to value a healthy breakfast. It was very important to 44% of 25 to 34-year-olds, compared to 25% of those aged 55 to 64.

10. Thirty and forty-somethings are more likely to make breakfast their healthiest meal 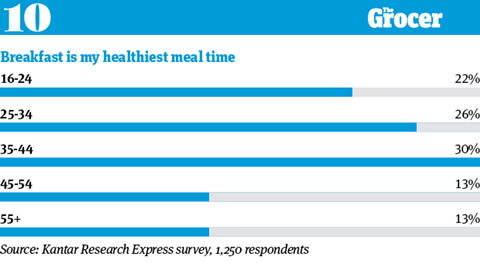 Overall, just 19% of consumers say breakfast is their healthiest meal of the day. Four in 10 say there is no difference between meal times, while 21% are healthiest at lunch and 20% make their biggest effort at dinner.

But there is one demographic that leans heavily towards breakfast: 35 to 44-year-olds. Three in 10 of them make their first meal of the day the healthiest of all.

Considering working consumers are also far more likely to eat breakfast options on the go, it shows just how much potential there is for healthy, convenient options