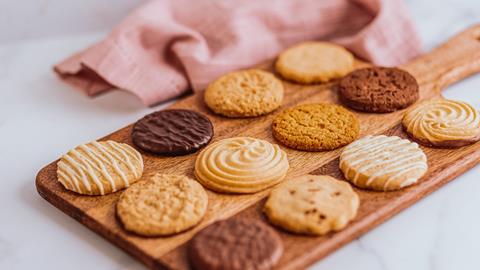 Trading up, treating and preparing for HFSS regulations: 10 charts that explain UK attitudes to biscuits

Brits love a biccie. But with new HFSS rules looming, research shows shoppers are worried reformulation will affect taste. It also reveals which regions and age groups are the biggest biscuit eaters, what varieties are most popular – and why we love a premium option

1. People in the north east eat the most biscuits 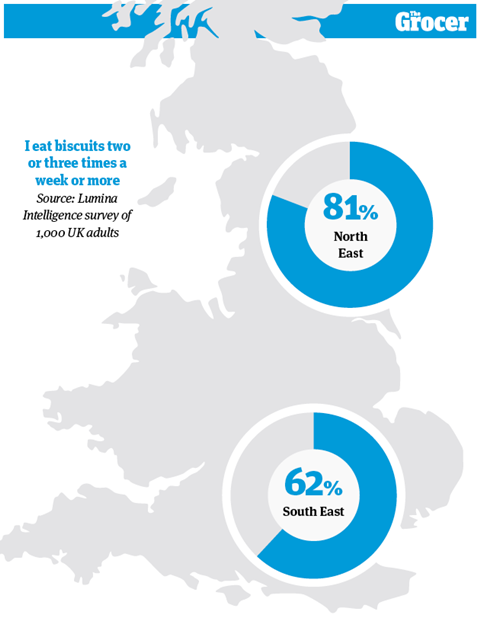 As the stereotype goes, British people enjoy nothing more than a nice cup of tea and some biscuits. But, as our Lumina Intelligence survey of 1,000 UK adults shows, Brits’ love of biccies isn’t just a cliché. According to the survey, 71% of Brits eat biscuits two or three times a week or more, an answer that overindexes with 35 to 44-year-olds (81%). On the other hand, the youngest age group, 18 to 24, eats the least (61%). Biscuit consumption also fluctuates across the country. The region that eats the most biscuits is the north east, with 81% of residents partaking multiple times a week, while people in the south east eat the least. Finally, 26% of consumers tuck into biscuits daily, with the over-65s most likely to do so (31%).

2. Afternoon snack is the most popular biscuit occasion

It seems biscuit brands have the 3pm slump to thank for a big proportion of sales. Because the most common occasion for Brits to eat biscuits is as an afternoon snack (57%), while half of people usually eat them in the evening. “Biscuits are one of life’s little joys and consumers are enjoying them throughout the day”, says Suzie Carlaw, head of brand at Border Biscuits. She believes retailers should offer a range of pack sizes and flavours “to suit every biscuit occasion” and cater for different taste demands throughout the day. This includes “something lighter in the afternoon” and more indulgent flavours for the evening. While on the go (20%) and breakfast (16%) were less popular occasions, both over indexed with the 35 to 44 age group.

3. Most people trade up to premium biscuits on special occasions 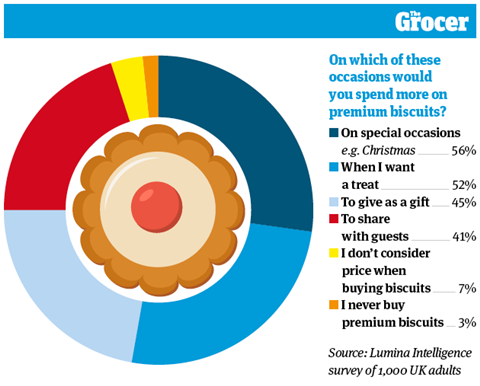 It’s no surprise that the most commonly bought format of biscuits in the UK are packets of everyday varieties (70%). However, the next most popular are packets of premium biscuits, which 57% of Brits buy most often. But when, and why, are shoppers willing to pay more for fancier fare? According to our survey, special occasions such as Christmas are the most popular reason for trading up (56%), while more than half of Brits spend more simply when they want to treat themselves. To tap this opportunity, Carlaw believes brands should “offer more than just an everyday biscuit”. “Shoppers are looking for a premium treat that doesn’t compromise on taste, but at an accessible price,” she adds. 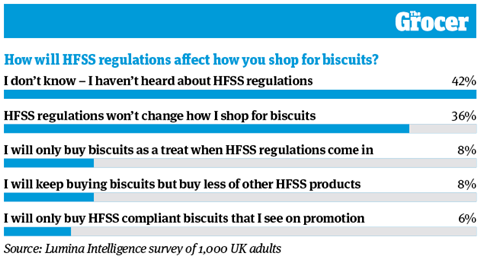 Shopping for biscuits is about to get a bit different, thanks to incoming restrictions on how and where high fat, salt and sugar (HFSS) products can be promoted in stores and online. But while Carlaw says biscuit brands such as Border “have talked of little else”, almost half of shoppers (42%) haven’t yet heard about the new regulations. Of those who have heard about them, 36% say the restrictions won’t change how they shop for biscuits. According to Carlaw, “it’s not surprising that for many, long-standing behaviours won’t change”. However, she has no doubt “HFSS legislation will bring with it big changes to the way shoppers interact with products in-store”, as many are already “choosing more carefully when it comes to biscuits”. 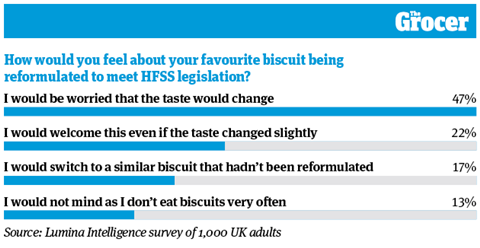 In order to dodge HFSS restrictions, some biscuit brands may choose to reformulate to bring their products below the allowed level of fat, salt and sugar. Such a move would be welcomed by 22% of consumers, even if it slightly changed the taste of their favourite biscuit. However, most shoppers (47%) are concerned reformulation would alter the taste of their most beloved biccy. This comes as no surprise to Carlaw, who says consumers are looking for “delicious biscuits that are worth the calories when they do indulge”. Some taste-conscious shoppers would move to a different, unaltered product. 17% say they would switch to a similar biscuit that hadn’t been reformulated, with 35 to 44-year-olds most likely to do so (25%). 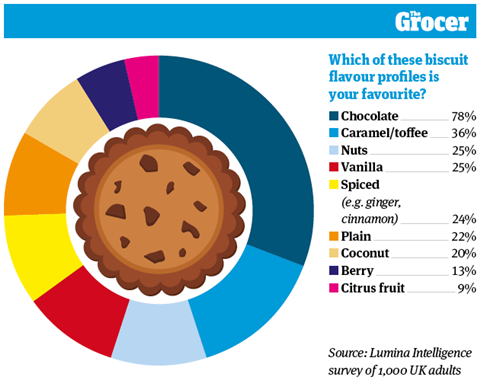 When it comes to biscuits, Britain is a nation of chocoholics. Presented with a list of flavour profiles, the vast majority of people (78%) picked chocolate as their favourite, followed by caramel or toffee (36%). The next most popular flavours were nuts and vanilla, which were both chosen by a quarter of respondents. According to Carlaw, consumers want “more indulgent ways for everyday moments to feel special”, so they seek out biscuits that deliver “a rich and tasteful experience”. “Chocolate holds a special place in people’s hearts and is often seen as the ultimate treat,” she adds. The flavour was particularly popular with people in the East Midlands (86%), while Londoners were most likely to pick a plain biscuit (28%).

7. Cookies are the most popular type of premium biscuits 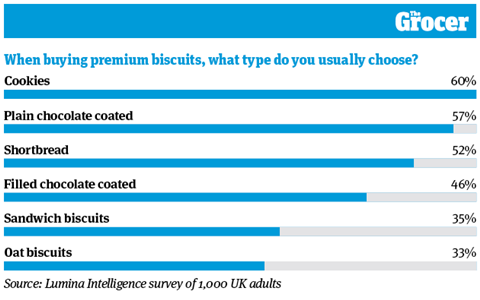 We already know Brits like to splash out on premium biscuits for special occasions (see chart three) but what type of posh biscuits do they prefer? According to our research, cookies are the most commonly bought premium biscuits (60%) though they were least popular with the over-65s (42%). The most popular biscuits for this age group were plain, chocolate-coated varieties (62%), which were the second most popular overall (57%). The third favourite variety was shortbread, which more than half of respondents say they choose most often (52%). There are also some gender splits here, with sandwich biscuits more popular with men (38%) than women (32%). Oat biscuits (33%) over-indexed with respondents in Yorkshire (40%).

8. Over half of Brits buy biscuits instead of other treat items

Treating is a big deal in biscuits. For 60% of consumers, biscuits of all types are seen as an occasional treat, while 58% view them as a permissible treat and eat them regularly. What’s more, according to Border’s Carlaw, “people don’t want to be disappointed with their treat and are willing to pay more to enjoy something special”. This could explain why many Brits (52%) often choose biscuits over other items such as confectionery when they feel like treating themselves, with men (57%) more likely to do so than women (47%). Male consumers (52%) are also more likely than females (46%) to view biscuits as a normal snack as opposed to a treat. Finally, 76% of Brits think premium biscuits are more of a treat than everyday varieties. 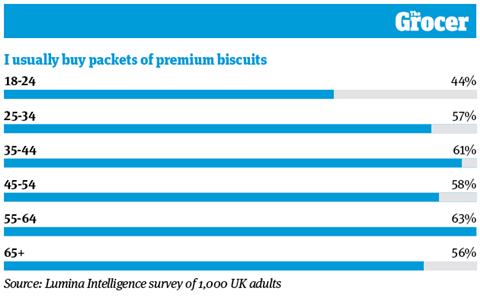 As chart three shows, more than half of Brits (57%) say they usually buy premium packs when shopping for biscuits. And it’s the 55 to 64 age group that buy the most, with 63% picking it as their most commonly bought format. This could be because they are happy to splash out, as this was also the age group that found price least important when buying the category (43%), while it was most important to those aged 45 to 54 (60%). Men (61%) also buy significantly more premium biscuits than women (53%). Thirty-eight per cent of Brits said their preferred format was selection boxes, which were most popular with 35 to 44s (46%). When comparing individually wrapped biscuits, multipacks (33%) were more popular than singles (25%).

10. Brands are more important to men than women when buying biscuits 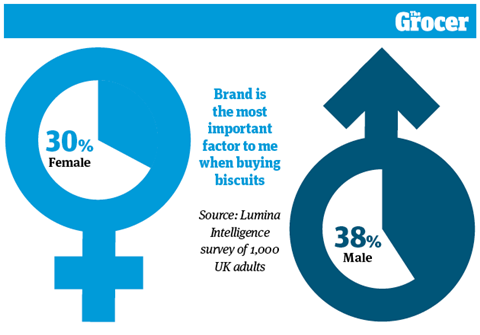 Although they may be feeling the pinch from price inflation, shoppers are still buying biscuits from “brands they know and love”, according to Border’s Carlaw. Shoppers that want to make the most of their money “continue to look for trusted, well-known brands as they seek reassurance from their purchase”, she says. Brand was the third most important factor to shoppers (34%), and was favoured by men (38%) more than women (30%). Price came in second (54%), with taste the most important factor overall (87%). However, taste was much more vital to the over-65s (92%) than 18 to 24-year-olds (81%). Health was the least important factor (13%).