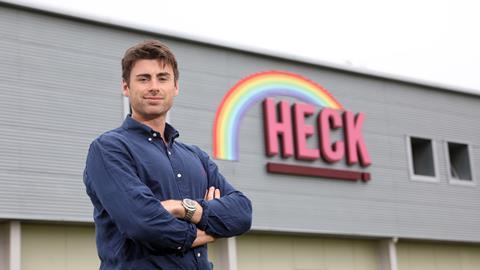 Heck’s co-founder has taken flak for his keenly maintained physique. But he has serious ambitions – including a US HQ and a new oat drink

Jamie Keeble has interests beyond his muscles. Although you may not have known that if you watched Alex Polizzi’s ‘The Fixer’ in 2014. The BBC show suggested Keeble was far more concerned with his physique than the family business – something the Heck co-founder is keen to put behind him.

“Work is my family’s hobby,” he stresses. So much so that Keeble’s father would let him play truant as a child so he could help sell sausages from a market stall.

“The sausage business is all I’ve known and I love doing it. I work my socks off. The programme didn’t portray me well but I understand that’s how TV works.”

Indeed, that shallow portrayal of Keeble is at odds with how he comes across now. Older, wiser and with six years more top-end sales experience under his belt, work is clearly a priority for the 30-year-old.

That’s partly down to sobering events in his personal life. Keeble’s brush with testicular cancer in 2016, which has made him keen to raise awareness – “if you’ve got any concerns, get them checked” – saw him pour even more effort into Heck.

“It definitely settled me down. I was 25, 26, you think you’re indestructible until you have some sort of illness,” he recalls. “When you go through something quite scary and traumatic, you find a way of blocking it out and you crack on.”

If Heck’s financial results are anything to go by, Keeble’s focus on work is paying off. Turnover rocketed almost 10-fold to £23.6m in the year to 31 July 2019, thanks to Heck forging a “good reputation” and solid listings with the major mults.

“When you go through something quite scary and traumatic, you find a way of blocking it out and you crack on.”

The pandemic hasn’t derailed those efforts, says Keeble. In many ways, Heck was in a fortunate position. The brand suddenly counted itself lucky that its ambitions to go beyond retail – “we’ve been trying for years to get into foodservice” – hadn’t paid off.

So the main challenge was dealing with rocketing volumes in the mults. When panic buying first took hold, Heck had to manage a 50% uplift in production,from an average of 20 tonnes a day to more than 30. “

We turned up all lines because the main question from every retailer was, ‘How much can you give us?’”

Then Heck, along with the rest of the market, decided to focus on bestsellers. “Our best two SKUs – Heck 97% and Chicken Italia – were all we produced for the first two weeks of lockdown,” Keeble recalls.

At the same time, Heck had to get used to the challenges of social distancing. On this front, too, it was lucky. Having invested in automation last year, it had reduced headcounts in its manufacturing sites. Keeble says the number of people required on its packing lines, for example, has gone down from 12 to four.

Now things have calmed down, Heck is in a stronger position than ever before. It has more facings – about 20,000 – and all its ranges are back in full production.

The brand is also back on TV, and this time on its own terms. Its first-ever TV ad aired on Channel 4 in July to capitalise on a period of high demand – the sausage market was seeing a 37% surge in value sales [Kantar 12 w/e 12 July 2020].

The tongue-in-cheek ad, which sees people recreating the holiday experience in their own homes, neatly tapped into the coronavirus experience. “We thought it was right to capitalise on the staycation theme [rather than] focusing on what makes us unique.”

It’s certainly a safer approach than the one it took this time last year, when Heck unveiled its most controversial product to date: the Boris Banger.

Boris Johnson’s visit to the Heck factory, where he stopped for a photo op with an eponymous sausage creation, stirred up a storm on social media. Soon the sausage brand was trending on Twitter for all the wrong reasons. As customers declared they would cease to buy Heck products, the firm was forced to clarify it had no political affiliation. Tellingly, the brand has not used Twitter to promote since October last year.

“We were thinking of Boris Johnson the comical celebrity. We weren’t really thinking of it looking like a political statement [and] that wasn’t the intention at all,” Keeble explains.

“It split the country down the middle for us. You had half our social media response being all for it and half wanting to rip your head off.”

Was it his idea? Keeble was off-site at Waitrose’s Berkshire HQ that day. Was anyone at Heck to blame? No.

“[Johnson’s team] were in the area and asked if they could come around to have a look. Our door’s open to anybody, that’s always been our stance,” he says.

So Boris Bangers won’t be making their way on to Heck’s NPD roster any time soon. Instead, it is continuing to focus innovation efforts on plant-based.

“We’re running two horses,” Keeble says. “We have plant-based products full of pulses, veg and greens that people understand and then we’ve gone down the pea protein route to really mimic our current meat products.

“Pea protein is definitely the more mainstream and could be a big part of the business; it’s really targeting the flexitarian market,” he explains.

The tack has clearly been working.

Last year, the brand more than tripled sales of its veg-based sausages, according to The Grocer’s Top Products survey. Keeble expects veggie products to account for a fifth of Heck’s sales by the end of 2021, up from 12% at the moment.

Of course, Heck is facing plenty of competition from other plant-based brands.

Keeble names Meatless Farm Co, which is also growing strongly, as its “biggest rival”. But he believes Heck has “the angle” on these brands.

Speed is one crucial advantage over its competitors, he says. “We are such a small, lean and efficient business, we can turn things around very quickly. For example, our chicken mince range launched into Sainsbury’s this month. A month before, the product didn’t exist. It’s that sort of reputation that helps get us business,” Keeble argues.

Then there is his not-so-secret weapon: his mum, co-founder Debbie Keeble. She is “the real brains” on the innovation side, Keeble says, along with “superstar” ex-Pizza Express chef and NPD guru Callum Smith.

“She does a lot of research is very good at foreseeing things and getting there before it becomes popular,” Keeble says. “That’s why we beat the curve on the vegan stuff.”

Now Heck is trying to get ahead of another fast-growing curve: dairy alternative drinks. A Heck oat drink is in the “very early stages” of development, he reveals. It’s a pet project for Keeble, who has a “passion” for milk alternatives due to his own lactose intolerance. And the innovative thinking doesn’t stop there. Another drink idea currently in the works is a Heck low2no beer.

Amid these lofty ambitions for Heck, preliminary discussions are also taking place over getting listings into European supermarkets, while he thinks it could become a £100m business and envisages having a US HQ in the not-too-distant future.

“It’s all part of the dream,” he says. “It’s crazy to see us on this scale, servicing all the retailers, producing great food and dealing with £1m contracts. It’s fantastic. We’ve got huge ambitions and I love doing it.”

Job title: Co-founder and head of sales at Heck since 2011

Family: Partner and Dexter the spaniel

Hobbies: Playing football in a six-a-side team and hill walks in the amazing North Yorkshire countryside

Team: Manchester United despite living near Leeds, but don’t hold it against me