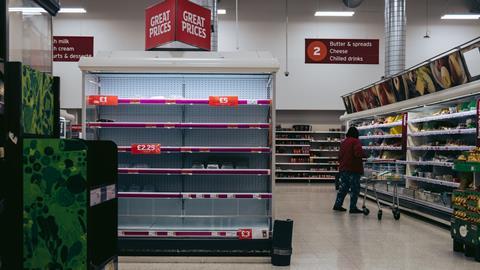 What impact is coronavirus having on the UK grocery market?

Bouyed by panic-buying and lockdown, take-home grocery sales are growing at the fastest rate since records began in 1994. At the same time, UK shopping habits are changing as Brits adapt their lifestyles to accomodate restrictions. So what exactly is going on?

Shoppers’ priorities have changed since the beginning of the crisis. With the virus still a very real threat and lockdown measures still in place, people are increasingly deciding where to shop based on factors like proximity, cleanliness and crowds. And they are straying from their usual stores.

According to a consumer survey by consultancy firm McKinsey & Company last month, 16% of Brits have changed primary grocer since the onset of the coronavirus crisis. A further 14% said they had used a different grocery store than usual during the period.

Among those shoppers, 41% switched to find a less crowded store, while 36% changed to a store that was closer or easier to reach. A quarter said they needed to find cheaper prices and 14% switched because the store was cleaner.

Convenience is more important than ever

With shoppers staying closer to home and looking to avoid queues at large supermarkets, both the Co-op and independent retailers have gained market share, according to latest Kantar figures.

What has happened to consumer confidence since lockdown began?

That reflects a boom in online shopping, which now accounts for 11.5% of all grocery sales. According to Kantar, the channel gained more ground and attracted more new shoppers in 2020 than it has in the previous five years.

“The retailers have done a brilliant job of reacting to a sudden spike in demand by increasing their online capacity, and it’s meant that nearly one in five British households ordered groceries online in the most recent four weeks, 1.6 million more than this time last year,” said Fraser McKevitt, head of retail and consumer insight at Kantar.

Which helps explain the sales growth at Iceland, which very quickly ramped up availability of online delivery slots during lockdown. Its sales were up 28.6% over the 12-week period, giving it a 2.4% share of the market – its highest in two decades.

The big shop is back

Those still willing to venture to a big supermarket are doing so less often – and spending more when they do, Kantar data shows.

“In the most recent four weeks, the trend towards fewer, larger shops that we saw in April broadly continued,” said McKevitt. “Shoppers visited the supermarket 3.5 times per week on average, meaning 100 million fewer trips overall than the same month last year, and increased their spend each trip to £27.41 – nearly 50% more than they did during normal times.”

The greatest rise has been among families with children over the age of 16 living at home, Kantar found. They spent £618 on average this month compared with £545 last May.

“People have been working their way through their store cupboards over the past couple of months and some will now be spending a bit more on each visit to the supermarket to replenish supplies,” McKevitt added.

A drop in promotional activity has also boosted supermarket spend. In a bid to preserve stock, Britain’s supermarkets have significantly reduced promotions since the outbreak began, Kantar data shows.

In February, before the onset of lockdown in the UK, 31% of total sales value was through promotions. That plummeted to 25% in April, and it has remained low - driving grocery inflation to 3.1%, it’s highest level since January 2018.

Despite the drop in promotions, however, Kantar’s McKevitt said the data did not indicate shoppers were trading down on products.

“In the past four weeks both brands and own-label products have grown at a similar rate, and brands are actually edging own label by around 3%, so there’s no sign so far of a rush to more economical ranges,” he added.

With plans for reopening the hospitality sector still uncertain, Kantar predicts extra meals, snacks and drinks consumed at home will mean take-home sales at the grocers could be up by 12% over the course of 2020 as a whole.