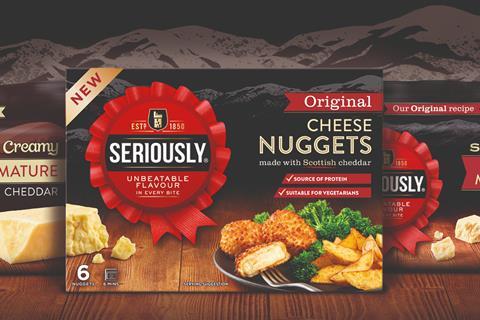 Lactalis UK & Ireland has revamped its Seriously cheese brand with a new packaging design and the launch of Seriously Cheese Nuggets – its latest tilt at the hot cheese category.

The nuggets are made with Seriously’s cheddar cheese and coated in breadcrumbs (rsp: £2.50/pack of six, 150g). They will go on sale on 7 July in Waitrose and Ocado, with further launches planned in other retailers later in the year.

Merchandised in the cheese aisle, the nuggets follow the launch by Lactalis of Seriously Melting Pots in 2018.

The launch represented another move to add value to the brand’s core cheddar lines, suggested newly appointed Lactalis UK & Ireland MD Mike Chatters, while also being “bang on trend” as a high-protein meat alternative for flexitarians.

The NPD also offered retailers the opportunity to tap into the ‘big night in’ occasion, as well as the increasing popularity of convenience foods, Lactalis said, and comes as the brand saw a 16% increase in value sales since the turn of the year [IRI w/e 24 April].

The new night out? Big night in category report 2020

“With Seriously performing well in the market, we wanted to continue to build on this success by introducing another exciting hot cheese product,” said Lactalis UK & Ireland group marketing and category director Heloise Le Norcy-Trott.

“With its Scottish heritage, provoking backstory and a proven track record for bringing successful new products to market, we believe that Seriously Nuggets will be a big hit with both consumers and retailers.”

Separately, the supplier is also relaunching Seriously’s packaging design, with a new look designed to unify the entire range, while also “emphasising the great taste of our products by highlighting they are all made with the same rich, characterful and tangy Seriously cheddar”, she added.

The relaunch will begin with Seriously’s core range including Seriously Cheddar blocks 350g and Seriously Squares cheese portions, which started rolling out into stores in June. Its last major packaging revamp was undertaken in 2017, when Lactalis dropped the word ‘Strong’ from the brand name.

“Both of these developments are part of a wider investment in the Seriously brand and we look forward to sharing more exciting news later in the year,” Le Norcy-Trott said.