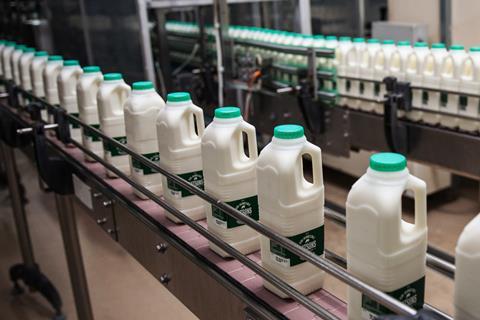 Medina Dairy has imposed two separate price increases for farmers supplying it with milk – reversing some of the cuts it implemented at the start of the coronavirus lockdown.

The processor, which is in the process of merging with rival Freshways, increased its milk price by 1p to 21.75ppl on 15 June and will make a further increase of 1.5p on 1 July – taking its standard litre price to 23.25ppl.

Medina said the price hike reflected its “commitment to returning to a sustainable milk price for our farmers as soon as we are able”.

The processor and Freshways were among the hardest hit by the collapse of the foodservice and hospitality sectors in March. But a number of corrective actions by farmers to pull back on production, coupled with a favourable spring flush, helped stabilise the supply situation. Several other processors such as Graham’s the Family Dairy are also now starting to increase the amount paid to farmers.

It comes as the sector’s ‘Milk your Moments’ ad campaign was seen by 29.5 million people in the national press and 33 million across Facebook, Instagram and Twitter since its launch in mid-May.

A further 2.6 million received geo-targeted social media adverts when they were close to supermarkets and convenience stores, according to data from Dairy UK and AHDB.

The campaign aims to highlight moments of connection during lockdown as well as raising money for mental health charities Mind, SAMH and Inspire.

“We’re delighted with the initial results from the campaign and to play our part as an industry to support people’s mental health during the lockdown,” said AHDB dairy strategy director Paul Flanagan.

“In the coming weeks, consumers will also see PR activity, in-store promotion in supermarkets and for the first time in over 20 years, a national TV advert at the beginning of July.”

“The campaign is a great example of industry and government working together to achieve a common goal, and it’s been thrilling to see the campaign off to such a fantastic start,” said Dairy UK CEO Judith Bryans.

“What’s been a real boost is that other industry partners, including RABDF, Trewithen Dairy and Kite have also loved the campaign and joined as funding partners. This shows how keen the industry is to back something so positive for consumers.”