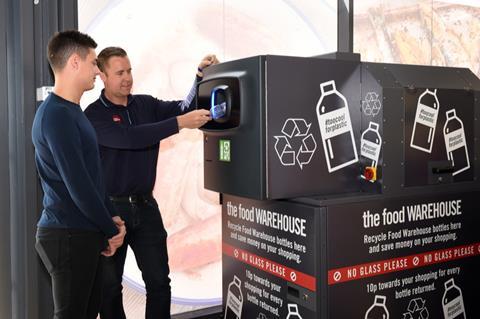 Supermarket bosses have described plans for the rollout of an “all-in” deposit return scheme (DRS) as a “total nightmare”, which has no chance of hitting the ambitious time frame set by ministers.

Yesterday (10 September) the Scottish government published draft legislation for a national rollout from 1 April 2021, to include a 20p deposit on all PET plastic drinks bottles, aluminium and steel cans, and glass bottles.

Similar plans proposed by former Defra secretary Michael Gove, which are not expected to come in until at least two years later, have sparked fears of cross-border chaos and “industrial scale” fraud.

The Grocer has now learned that despite ongoing trials across several retailers of reverse vending machines both north and south of the border, retailers are unhappy with the Scottish government’s timetable and predict many retailers will not be ready.

One source described the plans as “nuts” and said retailers were “fizzing with anger”.

He said: “The timetable of March 2021 is ridiculous. Now the regulations have been laid it will take until February 2020 to clear parliament and retailers won’t have final confirmation of the scheme until those regulations pass.

“The government expects 3,000 stores to have vending machines. But in many cases this will require significant refits including store extensions in order to put machines, warehousing and logistics into place.

“Most retailers of scale will need to refit their entire Scottish estate to some degree, with mid and large-format stores requiring significant work.

“It’s hard to be certain, but a capital expenditure for building the DRS infrastructure of around £250m for Scotland is not implausible, compared to the Scottish government estimate of £60m.”

A more realistic time frame for having the reverse vending machines in place was late 2022, the source added - almost two years after the deadline.

The Scottish government has said bigger retailers with more space should install machines to collect both bottles and cans and enable consumers to redeem deposits.

However, smaller retailers with less space have been give the option to return deposits over the counter, collecting the containers manually.

The source continued: “If the Scottish government sticks to its timetable the only way is for the majority of returns to be through manual handling.

“We think that would be incredibly disruptive, and would lead to significant customer dissatisfaction and the significant problem of colleagues handling thousands of tonnes of glass.”

The inclusion of glass in the DRS, which the UK government has also indicated it favours, has been met with major opposition from retailers and suppliers, who say it will massively add to the cost.

Richard Walker, UK MD of Iceland, which has recycled more than a million plastic bottles since launching DRS trials in May last year, told The Grocer this week there was a risk of two extremes, with Defra being slow to introduce DRS and the Scottish government racing ahead with an over-ambitious scheme.

Walker, who accused Defra of “kicking the can far down the road”, added: “Our big message to the Scots is it’s got to be high street-friendly.

“They’re hell bent on including glass. It would be a total nightmare. The problem is plastic. Unfortunately the Scottish government is determined to make it an all-in system.

He added: “DRS is great. I think we should get on with it. The system is fantastic… But if we are to support glass there is an issue with space. You need significant storage space.”

“Retailers remain concerned that the Scottish government continues to significantly underestimate the cost and complexity of building the infrastructure for a Scottish deposit return scheme,” said SRC head of policy Ewan MacDonald-Russell.

“Refitting hundreds of stores, building the logistical framework, installing thousands of reverse vending machines, and preparing data and anti-fraud systems will take time to get right. It is likely to be at least twice the anticipated cost [estimated] in the government business case. ”

The Scottish government has said targets for the amount of materials collected will rise for the first three years of the scheme’s operation, from 70% in year one to 80% in year two and 90% in year three.

It also announced fines of up to £10,000 for retailers who fail to comply with the regulations.

Scottish environment secretary Roseanna Cunningham said: “Our DRS scheme is the first national scheme of its type in the UK. It is ambitious in scale and scope, and gives the people of Scotland a clear and straightforward way to do their bit for the environment.”