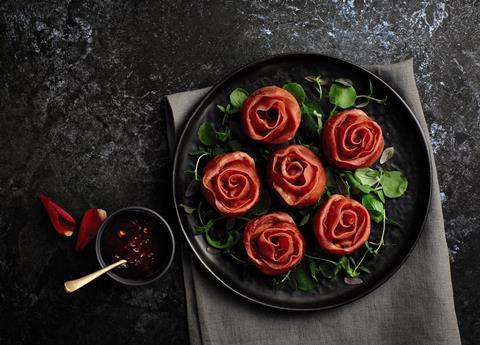 Aldi has expanded its vegan Valentine’s Day menu and dropped prices to match the dine-in deal offered by Morrisons.

As reported by The Grocer earlier this week, Aldi’s initial deal contained a starter, main, side, dessert and bottle of vegan prosecco for £7.80 per person, while Morrisons offered the same number of courses, vegan prosecco plus an extra side for £15 all in.

Aldi has since dropped the price of two of the menu items: a six-pack of Thai filo pastry roses and a two-pack of vegan chocolate dessert pots were reduced from £1.99 to £1.69. It has also included its Bordeaux Rosé, which is £1 cheaper than its vegan prosecco, to reduce the total cost of the deal.

Valentine’s Day 2021: what are in the dine in for two deals at the supermarkets?

However, if shoppers were to select the vegan prosecco instead of the rosé and a second side at Aldi, the total cost would amount to £15.35.

Vegan options on the Morrisons menu, which are all from premium range The Best, include a starter of Chorizo Palmiers, a Mushroom & Leek Bake for main with Chunky Chips and Petits Pois, Garden Peas and Edamame Beans on the side, and a Chocolate Pudding Twin Pack.

Morrisons shoppers have a choice of alcoholic vegan drinks as part of the deal, including The Best Prosecco DOC, The Best Pinot Grigio Rose and The Best Chilean Merlot, which all retail at over £7 when purchased individually.