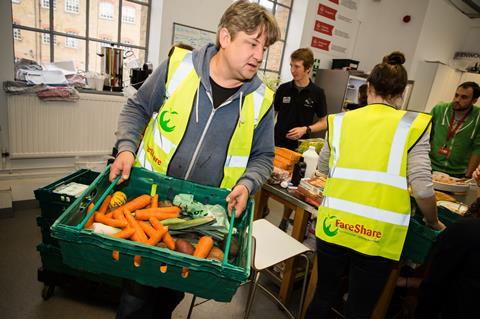 FareShare has claimed food waste has been “largely ignored” in the climate discussions at this year’s COP26 in Glasgow.

The food redistribution charity said the topic of food waste had been “frozen out of talks” at the climate change conference – despite the fact it is one of the largest sources of global carbon emissions.

The claims came after new data from The Carbon Trust quantified the amount of carbon emissions embedded within the life cycle of food that gets wasted.

The data showed that around 1.6 tonnes of CO2 were emitted for every one tonne of edible food that ends up going to waste.

This includes the energy in all stages of the food producing process, from cultivation to harvesting, packaging and transportation.

“Food is extraordinarily resource-intensive to produce – which is why it’s heart-breaking to see so much of it being wasted, with all the energy and water used to create it wasted too,” said FareShare’s head of marketing and engagement James Persad.

“These Carbon Trust figures show, from a carbon and water saving perspective, that the best destination for edible food will always be people’s plates.

“Right now, an estimated two million tonnes of perfectly good-to-eat food is wasted on UK farms – and while it’s still cheaper for farmers to send that food to AD, animal feed or landfill than to charities, that will continue to be the case.”

Read more: COP26 must trigger a mindset shift around food

The Carbon Trust research found around 1,525,000 litres of water is used to produce every one tonne of food that goes to waste.

Additionally, food waste accounts for between 6%-7% of all greenhouse gas emissions in the UK, according to data in the National Food Strategy.

“Meaningful action on food waste will be crucial if we are to achieve net zero,” Persad added. “We’re calling on government to take this issue seriously and commit to fair funding to enable food businesses to do the right thing, morally and environmentally, with their surplus food.”

FareShare had recently campaigned for the government to extend its Food Waste Fund to help farmers and food producers cover the costs of safely transporting surplus food to be redistributed to those in need.

However, the chancellor decided to axe the fund in his latest Budget review.