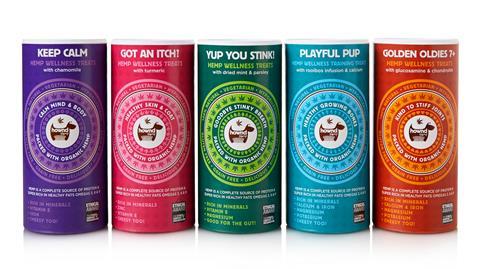 The manufacturer of vegan dog grooming products and vegetarian hemp-based treats is looking to raise £150k on Crowdcube in exchange for a 6.4% stake, valuing the business at £2.2m.

Within three days of launching, the campaign had raised over £80k from 75 investors.

Hownd plans to use the cash raised for NPD – including germ-free accessories, additions to its dog treats range and new chewing natural supplements.

“There is a lot of excitement for the brand over the next couple of years,” co-founder Mark Hirschel said. “Consumers are demanding meat-free ingredients in petfood and we are seeing this more and more.

“We would like to take on a wider variety of dog treats and we want to get into the petfood category, but we have to do it right.”

If it hits its initial fundraising target, Hownd is willing to overfund up to a maximum of £500k. The investment would be used to make “key hires” to its team, improving sales, marketing and operating functions.

Expanding its international presence was also a key priority for the business, which is currently available in 17 countries, including the US, Australia and Belgium.

Hownd’s product range is currently stocked by Pets at Home, Ocado and Amazon in the UK, as well as a number of independent retailers and grooming salons.

Plant-based pups: why fake meat is the latest human trend moving into petfood

The four-year-old company claims to have grown sales by 20% in the year to July 2019, mostly organically from its “loyal community” of customers and retailers.

However, it still has to generate a profit with pre-tax losses expected around £122k in the year to September 2020.

Plant-based petfood has been a growing trend lately, with US startup Wild Earth claiming an industry first unveiling its high-protein, meat-free dogfood made from renewably sourced fungi this week.