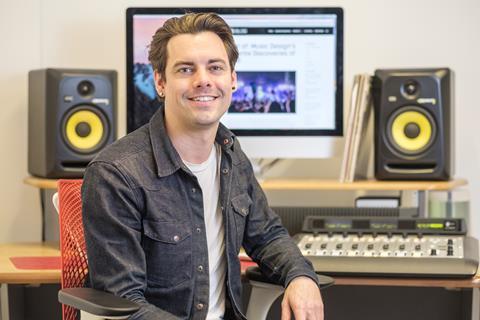 What was your first job? Working in the bakery at a branch of Co-op. Years later I ended up working on Co-op radio, programming much of the music that’s played.

What’s been your worst job interview? I had an interview for a bank where the interviewer asked me to ‘sell this pen’. I ended up selling the pen and pen insurance. I didn’t end up getting the job, I think they probably thought I was a smartarse… fair point.

What was the first music single you bought? I actually arrived at music fairly late, well into my teens, so I’ve not got the usual teen pop skeletons in my record collection. The first single I bought was Semisonic’s Secret Smile. I still kind of like it to be honest.

How do you describe your job to your mates? I usually say, “I consult major high street brands on what music to play in their stores”… I’m hella fun at parties.

What is the most rewarding part of your job? It’s incredibly satisfying to conceptualise an innovative, engaging music concept and then see (hear) it come to fruition in-store.

What is the least rewarding part? Budgets are getting tighter and tighter and sometimes it’s frustrating to see a creative idea clipped due to financial constraints.

What is your motto in life? Carpe diem… right?

If you were allowed one dream perk, what would it be? Unsupervised toilet breaks.

Do you have any phobias? Probably most kinds of bugs…

If you could change one thing in grocery, what would it be? Better speakers; the shopping experience is so much nicer when the music doesn’t sound like it’s coming out of a phone on the back of a bus.

What luxury would you have on a desert island? A record player and a ginormous record collection.

What animal most reflects your personality? A hare… big ears, great for listening.

What’s your favourite film? Pulp Fiction. Such a great soundtrack, and an amazing film.

Which celebrity would you most like to work with? Thom Yorke (Radiohead), such an inspiration.

What would your death row meal be? Probably tonkotsu ramen. The broth takes a good 24 hours to make… might buy me some more time.