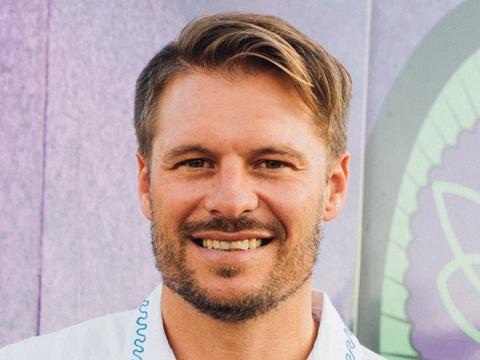 What was your first job? I worked as a busboy at a busy Mexican restaurant, which was very intense and fast-paced but actually a lot of fun.

What’s been your worst job interview? When I was younger I tried out for the NFL - the interview didn’t go so well!

What was the first music single you bought? Rock the Casbah by The Clash - they are amazing and I listened to it on repeat for days on end.

How do you describe your job to your mates? Brazilian ambassador of purple love.

What is the most rewarding part of your job? Making people happy with açaí and also doing it in a social and environmentally impactful way. At Sambazon, we aim to represent a positive future of global food consumption that makes a positive impact on local communities and protects the biodiversity of the Amazon rainforest.

What is the least rewarding part? Dealing with corporate finance.

What is your motto in life? Hugs and high fives.

If you were allowed one dream perk, what would it be? Teleporting to different continents would be amazing. I am a big fan of travelling so it would be great to be able to cut out the long commute.

Do you have any phobias? Mediocrity.

If you could change one thing in grocery, what would it be? I would ban all nasty preservatives and HFCS - they are prevalent in so much poor-quality food and consumers aren’t properly aware of their damaging effects.

What luxury would you have on a desert island? An açaí machine, of course

What animal most reflects your personality? A pitbull - they are sweet but aggressive.

What’s your favourite film and why? It has to be Stripes. It is a hilarious comedy with an international element and in the end it’s about the power of teamwork.

What has been the most embarrassing moment in your life? I can’t recall off the top of my head, but I’m sure there have been some contenders.

Which celebrity would you most like to work with and why? Oprah Winfrey - she has overcome so much and the world listens to her.

What would your death row meal be? A chocolate croissant, a giant pizza and an açaí bowl!