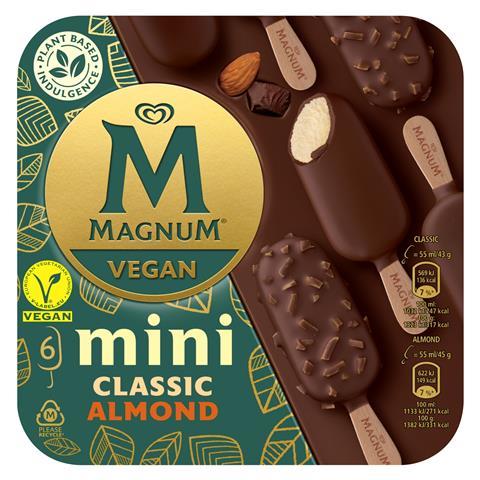 The new Magnum Vegan Mini Classic and Almond multipack will be rolling out from January in Sainsbury’s, Tesco, Ocado and Waitrose. The six-packs (6x55ml) have an rsp of £4.29.

The miniature versions are an extension of Magnum’s popular vegan range first launched in September 2018, and are made from Rainforest Alliance certified West African cocoa, through to Madagascan vanilla and Californian almonds.

The latest step in Burger King UK’s target to offer a 50% meat-free menu by 2030 is these vegan nuggets.

Produced by Unilever’s The Vegetarian Butcher, the nuggets are made from soy and wheat proteins, with a hint of celery to taste the same as their meat counterparts and give the “exact firmness and ‘bite’ you would expect” from a chicken nugget.

They roll out from 5 January.

The Berry Revolutionary variant is made with a raspberry-flavoured whipped almond-based alternative to ice cream, “gooey” sauce, sandwich cookies and chocolate swirls.

Tubs will hit freezers this month with an rsp of £5.49. 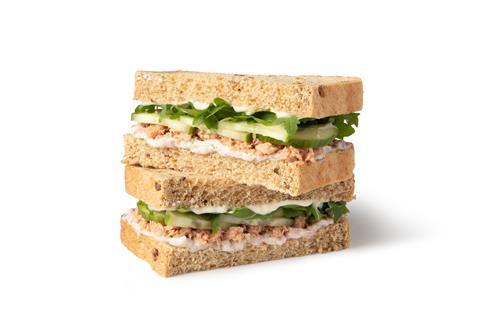 The new Starbucks plant-based Tu’Nah sandwich is made with The Vegetarian Butcher’s plant-based tuna alternative and is available in stores from 5 January, as a limited edition.

The tuna alternative is designed to replicate the taste and texture of tuna from a pea protein base, providing consumers with a “delicate fish taste”. 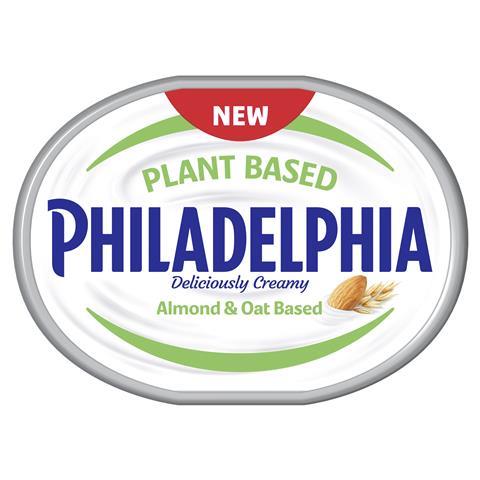 Mondelez has answered the rise in demand for vegan cheese alternatives with Philadelphia’s first plant-based variant.

Its Philadelphia Plant Based rolls into stores this month (rsp: £2.50/150g) after two years in development.

Mondelez said the NPD boasted a “unique” recipe that combined oats and almonds into a “delicious and creamy spread, as good as the Original”. 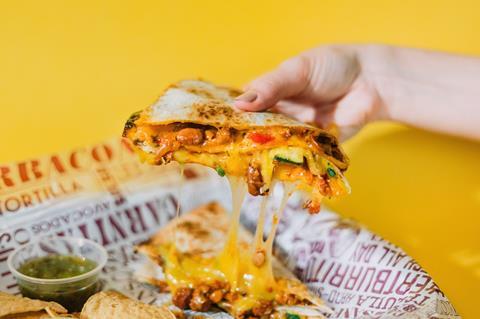 Burrito and taco joint Tortilla is teaming up with vegan cheese brand Applewood Vegan to launch a Veganuary 2022 special. 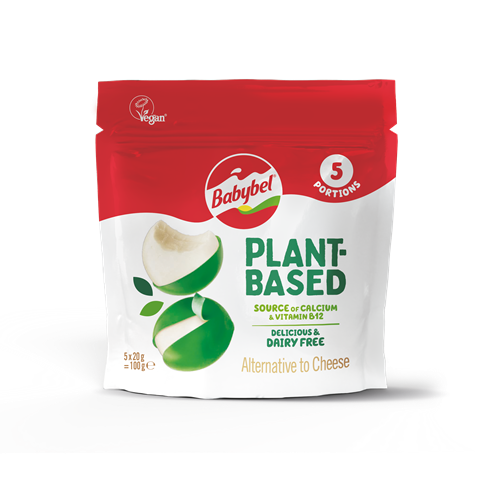 Made using a Vegan Society-approved blend of coconut oil and starch, Babybel Plant-Based is free from artificial colours and preservatives and a source of calcium and vitamin B12.

It rolls out first in Sainsbury’s on 1 January (rsp: £2/five-pack) followed by other major retailers later in the new year. 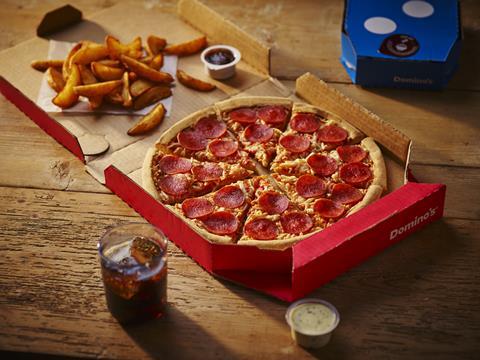 Domino’s Pizza Group is another brand to have teamed up with The Vegetarian Butcher to launch its new vegan PepperoNay Pizza.

The pizzas are topped with Domino’s vegan cheese alternative, while its plant-based pepperoni slices are made from legumes seasoned with garlic and smoke in a bid to recreate the flavour and texture of the classic cured pork pizza topping. The Vegetarian Butcher promises a crunchy crust and soft inner meat-like texture to the slices. 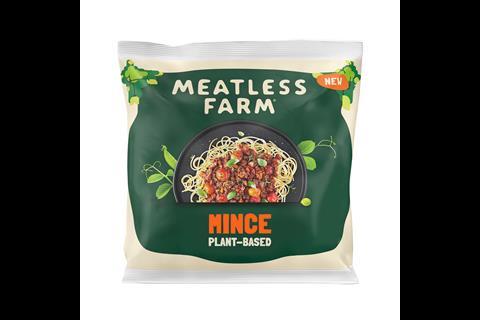 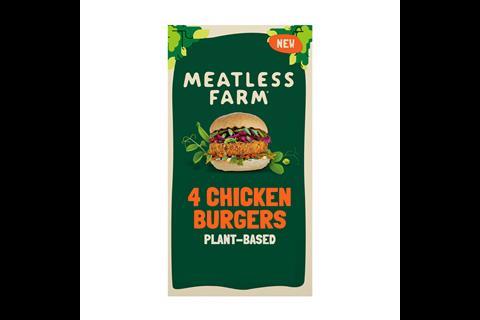 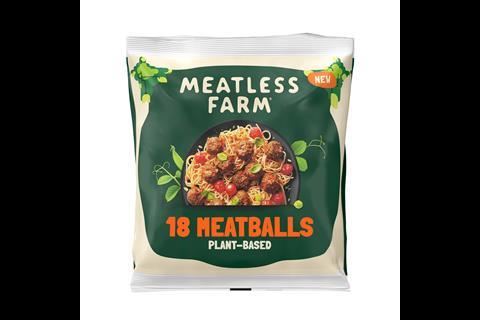 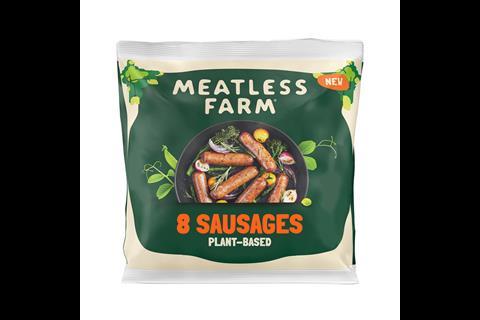 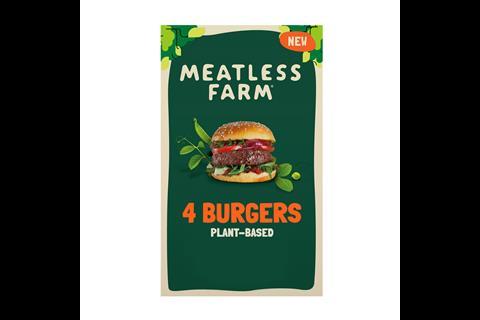 All of Meatless Farm’s chilled products are hitting the frozen aisles of Morrisons, in addition to a new meatballs SKU.

Each is made with pea protein and fibre. 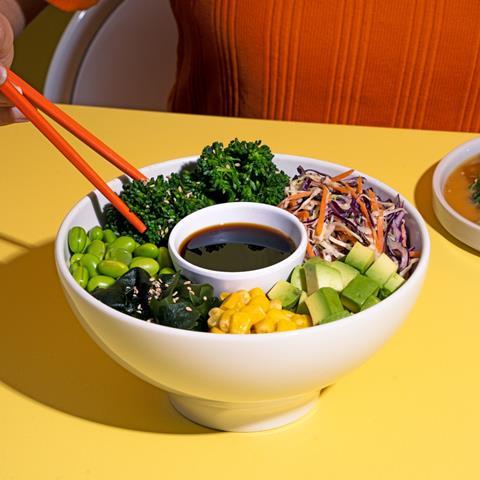 Customers will have a choice of a base of either rice, spinach or half & half and there is the option to add additional toppings. 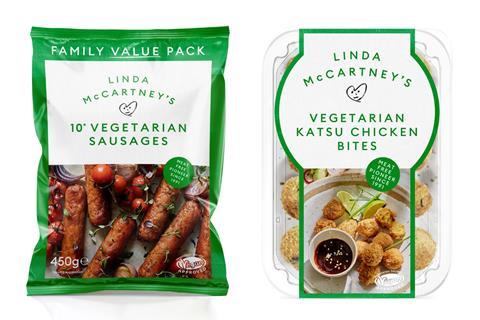 The frozen range is made up of its vegan takes on chicken nuggets, sausages, meatballs and burgers (rsp: £3/399g-460g). 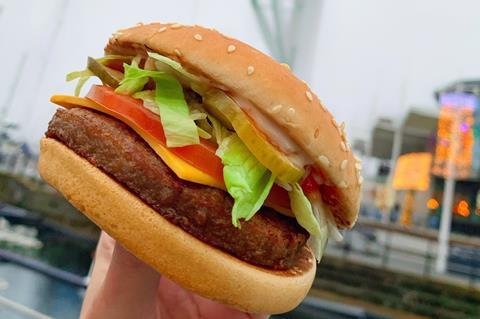 Following a soft launch last year into a limited number of outlets, the long-awaited McPlant burger, made from Beyond Meat, has finally gone on sale nationwide in McDonald’s restaurants after three years in development. 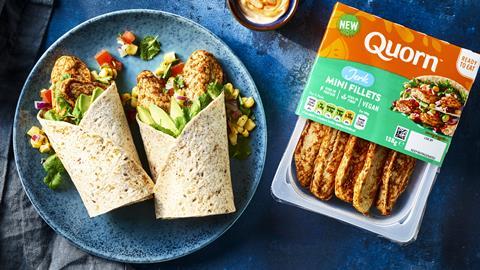 Made with its signature mycoprotein, Quorn’s Jerk Mini Fillets (rsp: £2.50) are designed to make lunchtimes easy, says the brand. These vegan fillets are prepared in a jerk-style marinade, are ready to eat or to fill wraps, salads and sandwiches. Like their ‘jerky’ twin, sweet chilli savoury fillets are also vegan and have all the appeal of a high-protein, low in saturated fat, real chicken fillet.

The launch is backed by a serious advertising campaign. Meanwhile, the brand’s Garlic & Herb Bites and Creamy Korma Bites (rsp: £2.25) also hit stores to fill a gap for on-the-go snacking.

Finally, Quorn’s Southern Fried Wings (rsp: £3) have given chicken wings a meat-free makeover. They bake in the oven for a crispy coating to ensure they’re considerably healthier than a deep-fried alternative. 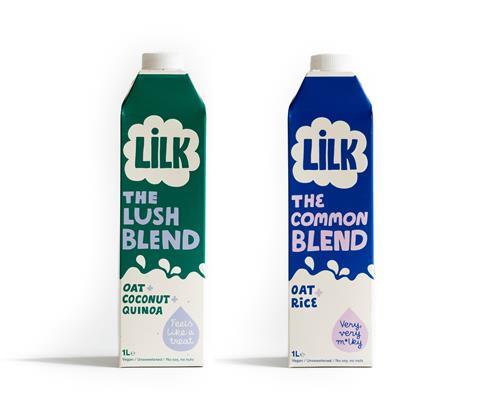 The two are billed as ‘next-generation’ milk alternatives, based on oats, with the addition of rice in The Common Blend to make for a milky taste, and coconut and quinoa in The Lush Blend for a creamy experience. 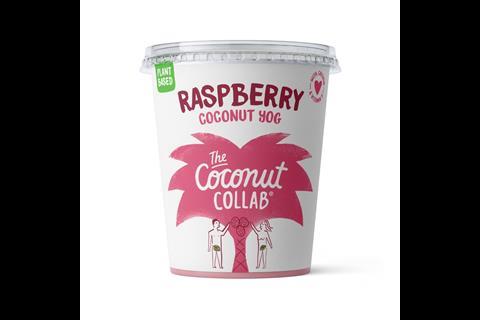 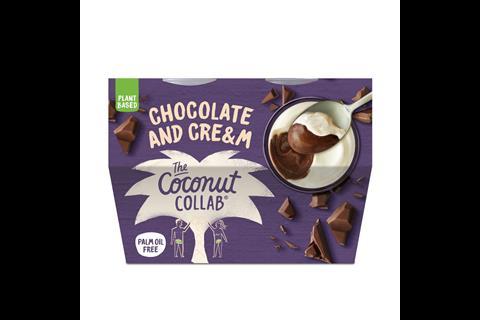 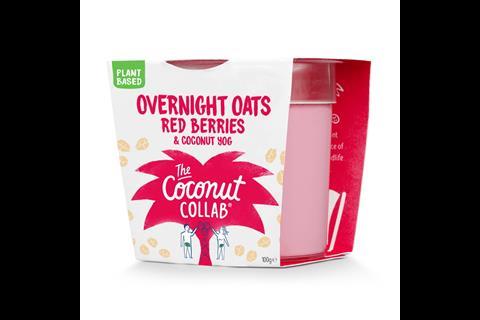 The Coconut Collab has expanded its ranges across dairy-free yogurts, dairy-free desserts and on-the-go breakfast.

The Coconut Collab’s Overnight Oats Red Berries & Coconut Yog will be hitting the shelves of Tesco on 3 January (rsp: £1); its Raspberry Coconut Yog will be hitting chillers in Sainsbury’s from 19 January (rsp £2.75); and ‘Choc and Cre&m’ Pots of Paradise will be landing in Tesco and Waitrose on 9 January, followed by Sainsbury’s in late February (rsp: £2.75). 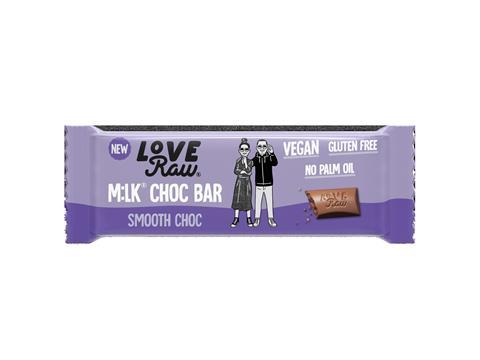 The products launch on the brand’s e-commerce platform, before a wider retail rollout in Spar and The Vegan Kind.

The bars use a new vegan recipe formulation to give an even smoother texture, it promises along with its guatantee the new bars are also free from palm oil and artificial ingredients.