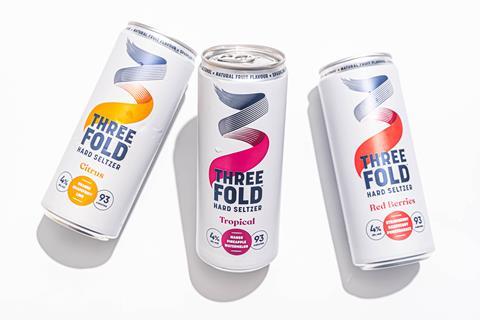 Three Fold is billed as having ‘mainstream adult appeal’, and is available in three fruity flavours: Red Berries, Tropical and Citrus (rsp: £2-£2.20/330ml)

The brand (4% abv) which The Grocer revealed was poised for UK launch in December 2020 is billed as having “mainstream adult appeal”, and has debuted in three flavours: Red Berries, Tropical and Citrus (rsp: £2-£2.20/330ml).

The spend of “around £5m” was the biggest brand investment Molson Coors had ever made into a new category in the UK, it said, and would cover “a comprehensive digital, social and out-of-home media campaign”.

They have rolled into Morrisons and Ocado and are also available at Amazon, Bargain Booze and Revl, and through wholesaler Bestway.

Nielsen data revealed that US retail sales across the hard seltzer category reached $2.7bn in the 12 months to June last year, it added [52 w/e 13 June 2020].

The move comes as the US drinking trend rapidly gathers pace in the UK. Kantar data revealed that sales hit £11.8m last year with 3.7% of all UK households buying hard seltzers [52 w/e 27 December 2020].

“All the signs point to hard seltzers being the next drinks category to firmly establish itself in the UK”, said Molson Coors brand manager Charlotte Revill.

“We expect its rapid growth in the US to be mirrored here and a major investment in our own product is to ensure that we, and our customers, are at the forefront of this quickly emerging category”, she added.

Three Fold is the latest in a flurry of brands looking to tap the growing UK category. Last month, The Grocer revealed that Coca-Cola was set to launch its Japanese hard seltzer brand Lemon-dou in Britain.

In April, Bud Light brought its US brand of hard seltzers to the UK. The 4% abv cans rolled into the mults in a trio of flavours: Lemon & Lime, Passionfruit, and Strawberry (rsp: £2/330ml).