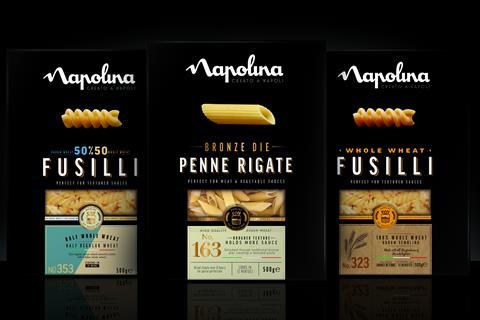 Napolina plans to remove 17.5 tonnes of plastic from the UK waste stream each year by switching the majority of its pasta to cardboard boxes.

As part of a major packaging overhaul, the Italian food brand plans to drop plastic for its “added value” pasta - the products beyond its core range. It will begin rollout of the sustainable pack from the end of October across Whole Wheat Pasta, Bronze Die and 50%/50% Pasta - a total of 12 SKUs.

The 100% recyclable pack, from supplier Tambrite, is “fully coated folding boxboard”. Shelf life would remain the same, said Napolina, which began developing the new packaging around 12 months ago in partnership with its pasta supplier, Ferrara.

While the eco-pack had added an additional 15% to the cost of goods for Napolina, there would be no changes to pack weights and rsps, it said.

The change follows the move last year by the brand to 51% rPET across its olive oil range. It is part of a major rebrand by Napolina of its 150-plus SKUs across tomatoes, pasta, pulses, oils, sauces and pizzas.

A new design featuring a revamped logo and imagery has begun rolling out in stores. It also details product provenance and provides ­”recipe inspiration”.

The overhaul will be supported by Napolina’s “biggest-ever” above-the-line push, including a TV ad from October “celebrating the romance of Italian food”.

The campaign will also include targeted influencer activity on Instagram and a focus on the ‘Cooking with Napolina’ YouTube channel to drive engagement with a younger audience.

This marked “a major evolution of the Napolina brand” said commercial director Neil Brownbill. “Italian cuisine remains the most popular cuisine in the UK, driving 2.2 billion meal occasions in the last year.”