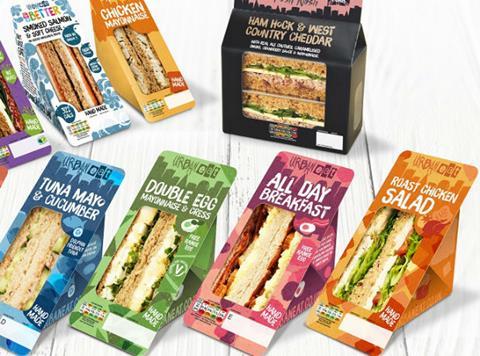 Urban Eat was snapped up by Samworth Brothers for £6.4m

Ginsters owner Samworth Brothers has swooped to pick up the Urban Eat sandwich brand from out-of-business Adelie, which owed its private equity owner, suppliers and staff close to £100m when it collapsed in May, new documents from administrators reveal.

The Urban Eat range, which is available in convenience stores, coffee shops and cafés, was sold to Samworth for £6.4m in the asset sell-off, following Adelie appointing Deloitte as administrator on 26 May.

The Ginsters and Soreen owner also bought plant and machinery at Adelie’s Southall site in West London for about £500,000.

Factory assets from Adelie’s numerous sites were sold to five different buyers for a total of £1.4m, including Samworth, olives and antipasti maker Winterbotham Darby and food-to-supplier the Real Wrap Co, which bought assets from the Wembley factory.

Despite the money generated from the sales, PE owner Intermediate Capital Group – which also holds Symington’s in its portfolio – will not be repaid in full for its £66m debt, the documents from Deloitte showed.

Unsecured creditors, with a total of more than 700 claims, are not expected to receive a penny of the £24.3m owed.

Invoice finance provider PNC should claw back an outstanding £4.6m from the collection of money owed to Adelie by its customers.

However, the group’s 2,200 employees will have to rely on the government’s redundancy payments service to receive some of the £1.5m owed for wages, holiday pay and pension contributions.

Adelie, which was the UK’s third-largest sandwich maker, had been lossmaking since 2016, with pricing pressures contributing to a £9.4m operating loss in the year to February 2020, according to the Deloitte report into the administration.

It was the biggest loss since ICG bought the business in 2016 from HIG Capital, which owned Adelie for a torrid 18 months, during which time it lost major retail contracts with Sainsbury’s and WH Smith, closed two factories and put its Irish business into administration.

The coronavirus crisis led to the overnight disappearance of Adelie’s foodservice business, which accounted for about 75% of group revenues, as the hospitality industry went into lockdown. Demand for retail food-to-go, where Adelie held contracts with McColl’s, Aldi, Caffè Nero and Shell, also dropped with shoppers stranded at home.

Adelie was forced to furlough 1,200 employees and requested funding needed to survive from ICG, which the PE firm declined, according to the Deloitte documents.

In April, Adelie appointed Deloitte to run an accelerated M&A process to find a rescue deal. However, as The Grocer revealed in June, a potential deal with rival food-to-go supplier Greencore, which would have saved the jobs of the majority of the 2,200 employees, was scuppered by the Competition & Markets Authority.

The administration documents confirm the rescue deal was dependent on Greencore receiving assurance from the CMA that the watchdog would not investigate the transaction.

“Unfortunately, the purchaser did not obtain appropriate comfort from the CMA in the required timelines and withdrew from the proposed transaction,” Deloitte wrote in the report.

Adelie was placed into administration shortly after, with the majority of the workforce made redundant.