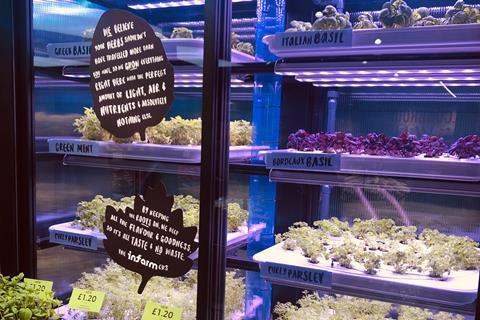 M&S is bringing ‘urban farms’ into seven of its London stores as part of an exclusive tie-up with international business Infarm.

From today, customers at the M&S Clapham Junction branch will be able to pick fresh herbs from the in-store ‘farm’, which is the first of its kind in the UK. The in-store farming units will roll out to a further six London stores by the end of the year.

As part of the deal, M&S will have UK exclusivity on the Infarm concept for the first six months. That exclusivity will be extended if M&S chooses to expand the concept to more stores.

Infarm already operates in many locations across mainland Europe, including Berlin and Paris, but this is its first site in the UK. The in-store farming system uses ‘internet of things’ technology and machine learning to deliver a “controlled eco-system”, which provides the ”optimum amount of light, air and nutrients”. According to Infarm, the technology “learns, adjusts and continuously improves to ensure each plant grows better than the last one”.

The company says its concept increases freshness for the shopper and is more sustainable than traditional farming methods – using 95% less water and 75% less fertiliser than traditional soil-based agriculture.

Watch: customers react to the launch of Infarm at the M&S Clapham Junction store

“London represents many of the sustainability challenges that people will experience in cities over the next several decades,” said Erez Galonska, co-founder and CEO of Infarm. ”By offering produce grown and harvested in the heart of the city, we want to practice a form of agriculture that is resilient, sustainable and beneficial to our planet while meeting the needs of urban communities – first in London, and in the future, cities across the UK.”

Paul Willgoss, director of food technology at M&S Food, said sustainability was a key motivation for its involvement in the partnership. “We operate as part of a complex global food supply chain and want to understand the emerging technologies that could help provide more sustainable solutions, whilst also delivering fantastic products with exceptional taste, quality and freshness for our customers,” he said.

The move comes three months after Ocado announced a major investment in vertical farming. However, unlike the M&S initiative, the farms used by Ocado will not be public-facing.

Willgoss added: “Infarm’s innovative farming platform is a fantastic example of what can happen when passionate agricultural, food and technology experts work together.”