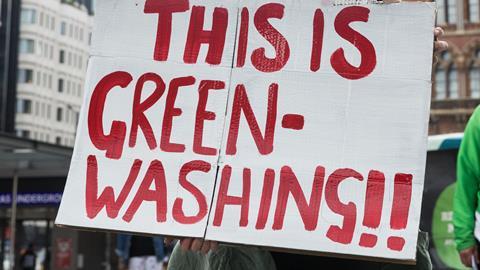 Greenwashing: why the CMA is cracking down and how

The CMA has published a ‘green claims code’ intended to stop consumers being misled, and plans to launch a thorough review of compliance

As well as upholding competition law, the Competition & Markets Authority has another key remit: policing claims or practices that could mislead consumers.

Last week, businesses got a sharp reminder of this as the CMA issued a warning over “misleading green claims”, known as ‘greenwashing’.

The watchdog published a ‘green claims code’ reminding businesses of their obligations and spelling key ones out in simple terms.

The code follows what the CMA called an “extensive consultation with businesses of all sizes” and is directed at companies across a range of sectors, including retail, food & drink, fashion and cosmetics.

The CMA also told companies they have until the end of the year to make sure their environmental claims comply with consumer law. At the start of 2022, it will launch a review of green claims, prioritising sectors where customers appear to be most concerned about being misled – including food.

In the meantime, where there is evidence of a clear consumer law breach, the CMA may take action before the official review even begins, it warns.

So, why is the CMA getting tough on this now? And how will the authority police it?

According to the CMA’s ‘Annual Plan’, misleading green claims have become one of its priorities as customers increasingly seek eco-friendly choices.

“More people than ever are considering the environmental impact of a product before parting with their money,” says CMA CEO Andrea Coscelli.

“Too many businesses are falsely taking credit for being green, while genuinely eco-friendly firms don’t get the recognition they deserve”

The need for action was highlighted by an investigation led by the regulator last year, which found 40% of green claims made online could be misleading.

Commenting as the CMA announced the code, Greg Hands, minister of state for energy and clean growth, said: “Millions of UK households are rightly choosing to switch to green products as they look to reduce their carbon footprint. But it’s only right that this commitment is backed up by transparent claims from businesses.”

There is also a competition element to the watchdog’s concerns. Carbon neutral, zero-waste, reef friendly, ocean plastic – such phrases have become commonplace as brands tap demand from eco-conscious consumers, and have the potential to give a competitive edge, in the CMA’s view.

“We’re concerned that too many businesses are falsely taking credit for being green, while genuinely eco-friendly firms don’t get the recognition they deserve,” Coscelli adds.

The regulator is not alone in its concerns. “Companies have cottoned on to the fact that sustainability is a massive selling point for their customers, more and more of whom want products that don’t harm the planet”, says Friends of the Earth’s senior sustainability analyst Clare Oxborrow.

“Certainly in some instances, trumped up green claims are made with little evidence to back them up, which makes it more difficult to work out which products are truly sustainable.”

It should be possible to demonstrate green claims are accurate within a framework, the CMA says. For example, if sector-specific rules mean food products must be made from at least 95% organic ingredients to be labelled as ‘organic’, then a loaf of bread labelled as ‘organic sourdough’ should strictly meet those requirements, the watchdog says.

To police its code, the CMA’s review will use desk-based research and ‘third-party information gathering’, along with site visits and direct requests for information where necessary, The Grocer understands.

It is also likely to consider complaints by consumers and businesses, as well as intelligence from other regulators including the ASA and Trading Standards.

There is unlikely to be a shortage of such complaints. Last year, for example, the ASA received over 30 complaints over a Quorn TV ad that claimed its Thai Wonder Grains pot helped it “reduce our carbon footprint”. The ASA concluded the ad was likely to mislead on the grounds it lacked background information for consumers, despite Quorn protesting the product was certified by the Carbon Trust.

Meanwhile, Coca-Cola and meat processor Danish Crown are both fending off lawsuits – in the US and Denmark respectively – from campaign groups alleging greenwashing in advertising (claims each business disputes).

For campaigners and consumers with greenwashing concerns in the UK, the CMA’s campaign may appeal as a previously unexplored route of complaint.

As for enforcement, the key piece of legislation here is the Consumer Protection from Unfair Trading Regulations 2008 (CPRs). It contains a general prohibition against “unfair commercial practices” as well as specific ones against “misleading actions” and “misleading omissions”.

“The regulator’s message couldn’t be clearer – we are watching you!”

Breaching it can be a serious matter, carrying a penalty of up to two years’ imprisonment, though a fine is more common.

The Grocer understands the CMA’s first recourse on detecting a breach will be a civil action, asking the company to sign a formal commitment to change its behaviour. A refusal to do so, or subsequent breach of the signed commitment, could result in the regulator using the consumer protection legislation to pursue the offending business through the courts.

Options open to the court would include ordering an offending business to pay redress to consumers, on top of any other penalty.

Of course, aside from the ever-growing prevalence of green claims, there is another factor behind the timing of the CMA’s code. It is no coincidence the CMA’s code has been published in the run-up to COP26, the 2021 UN climate change conference, in Glasgow this autumn. The CMA sees a heightened opportunity to shine a light on greenwashing, while demonstrating it is taking the issue seriously.

The focus for businesses should be ensuring they are in line with its expectations, says Ciara Cullen, partner at law firm RPC. “Retailers and consumer brands are right to innovate through offering greener and more sustainable products to consumers,” she says.

“With a tougher enforcement regime looming, however, they should review their environmental claims now.

“The regulator’s message couldn’t be clearer – we are watching you!”