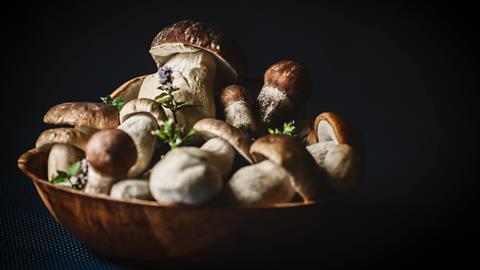 In a recent episode of Supermarket Secrets, Tesco’s resident ‘plant pusher’ (his words) not only waxed lyrical about the superb texture and mouthfeel of mushrooms, he also transformed his favourite fungi – king oyster mushrooms – into something so deceptively meat-like even Gregg Wallace declared himself impressed. (And he, as Wallace was quick to assure viewers, has “a reputation to protect”.)

Sarno’s mission to make mushrooms the meat substitute of choice for meat avoiders, reducers and others on the flexitarian spectrum doesn’t end there.

A couple of weeks ago, he announced on LinkedIn that he’d managed to persuade Tesco to stock fresh king oyster mushrooms in its stores (they’re on sale now under the Finest brand at £1.75 for a 200g pack) and shared a video on how to cook them.

What really caught my eye in Sarno’s post, however, was not the mushroom announcement but this not-very-subtle poke directed at other vegan brands: ‘Not all plant-based items have to be processed, thought up in a lab or come to life by way of million-dollar machinery,’ he wrote. Ouch.

At a time when Beyond Meat’s $1bn-plus mega IPO is making headlines, throwing shade at heavily hyped (and processed) plant burger ‘unicorns’ is perhaps not particularly original.

But Sarno makes a valid point – and puts his finger on a looming problem for the plant-based trend.

As the ingredients and processes involved in creating meat and dairy alternatives come under growing scrutiny (Beyond’s IPO alone will see to that), the plant-based category risks being exposed for being not quite as ‘natural’ or ‘healthy’ as some consumers might think.

That’s not even necessarily brands’ or retailers’ fault. While some have been all too happy to push the idea that plant-based is, by definition, more natural and ‘better for you’ (a conveniently vague descriptor, if ever there was one), most are far more careful with their claims.

And, as the ‘dirty vegan’ trend has proved, people who choose to avoid animal products don’t necessarily want to eat ‘healthily’ all the time. Sometimes they, too, fancy some junk food – and that’s rarely anything that could be described as ‘natural’.

However, that’s not how the plant-based category as a whole is perceived. And the fact that some plant-based brands aren’t pushing ‘natural’ or ‘health’ credentials is unlikely to protect them if there’s a public backlash against the use of processing in plant-based products.

Leaving aside, for the moment, the fact that hysteria around food processing tends to do more harm than good, there is always inherent risk in consumers believing they’re buying into one thing only to realise the product or category they bought into isn’t what they thought.

This will be challenging for many brands – but it will also create new opportunities.

As Sarno’s love of mushrooms shows, it is possible to promote plant-based eating while keeping ingredient lists simple and processing to a minimum.

As consumers become more aware of how plant-based products are made, and understand that plant-based doesn’t always mean natural, unprocessed or healthy, they will be asking more challenging questions about the products they buy. And, like it or not, those questions are likely to include levels of processing and ingredient decks.

All this means that brands and retailers need to be more than simply plant-based, if they want to stay relevant. The age of ‘plant-based plus’ starts here – and those in the category willing to embrace it have much to gain.