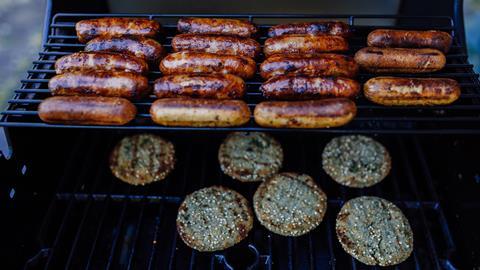 Who remembers Boris Bangers? Sausage producer Heck would no doubt rather forget them, having been forced to apologise to angry fans in the wake of the publicity stunt with the now-PM during his time on the campaign trail in 2019.

No such luck, though. Photos of Boris Johnson resplendent in a necklace of sausages at its Yorkshire factory have re-emerged in the national press today.

Why? Because from this week, retailers in Northern Ireland will require costly Export Health Certificates (EHCs) to import fresh sausages – alongside other chilled, processed meat like mince – from Great Britain. With a growing fanbase in Northern Ireland, Heck is among the British meat companies set to potentially suffer from this new rule. And journalists can’t resist a bit of irony.

The new requirements on processed meat exports are the latest in a long line of Brexit-related headaches for the food industry, which has already lost the ability to export shellfish to the EU under new post-Brexit rules.

And it’s yet another concern for supermarkets in Northern Ireland, which have faced shortages on shelves of some products due to the post-Brexit border arrangements.

Additional checks at the Irish border are already causing so much disruption that a number of speciality wholesalers have threatened to quit the island of Ireland altogether.

And while supermarkets have so far insisted they remain committed to Northern Ireland, they will no doubt view these latest processes for sausages and mince as a dry run for what might happen when other grace periods come to an end.

From April, for example, all animal products imported from GB-NI, including fish, eggs and dairy, will require an EHC. If the system starts creaking now, it doesn’t bode well for the shift to full regulatory checks on the Irish border.

One big area of concern is the potential shortage of vets, who will be required to sign EHCs for every consignment of products of animal origin exported from Great Britain to Northern Ireland or the EU. The UK government doubled the number of certified vets in preparation for the increase in number of EHCs required for exports, but many fear there will still be a severe shortfall in capacity.

Meanwhile, the EHCs for sausages and mince are only a temporary solution from the government. Unless the UK and EU reach a further agreement, exports of sausage and mince from GB-NI will be banned altogether from 1 July.

The UK government has already asked the EU to extend the NI grace periods until 2023 – something the Joint Committee will discuss this week, according to the BBC.

But with tensions still running high between the UK and EU, it's a worrying time for British bangers.