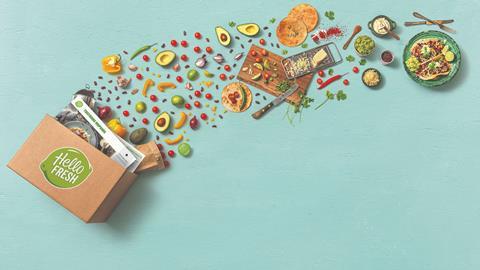 Let there be no doubt: meal kits are booming. European giant HelloFresh reported yet another bumper quarter of growth today, in which revenue more than doubled. Subscriber counts are soaring. “We’ve welcomed more customers than ever,” said a beaming CEO and co-founder Dominik Richter.

It’s a sign of wider acceptance of the recipe box format since the pandemic began. Last month, rival Gousto announced record sales for 2020, pushing the company to profitability for the first time since launch. Gousto is now shifting a meal kit every three seconds.

Retailers and big brands are taking notice. Last month Tesco teamed up with recipe box service SimplyCook to launch an in-store meal kit offer. At the tail end of last year, Nestlé acquired a majority stake in Mindful Chef, and made the same move on SimplyCook in February. With “increasing interest of consumers in food as well as subscription services”, Nestlé told The Grocer, such businesses offer “significant growth opportunities”.

They’re not wrong. But how long can the good times last? Are meal kits a flash in the pandemic or a format for good?

Covid has created near perfect conditions for meal kits to thrive. The resulting closure of restaurants and more time spent at home has sparked a rediscovery of home cooking among Brits. A recent YouGov survey for Premier Foods found 73% have enjoyed cooking at home over the past 12 months.

Meal kits have stepped in to not only help inexperienced home chefs, but save skilled cooks from boredom. Providers have “really captured the consumer mood”, head of insight at Kantar UK Anne Benoist told The Grocer.

“Over half of us say we’ve been trying new recipes since the pandemic began, making the most of additional time at home and taking pleasure in the experience of cooking. It’s been a way to relax and escape for many, particularly while we can’t travel,” she added.

Furthermore, ordering a meal kit online, and subscribing to such a service, is less alien to most consumers with so many now ordering online groceries and subscribed to the likes of Amazon Prime. And HelloFresh’s Richter believes recipe box businesses “will benefit disproportionately from the shift to increased online grocery penetration”.

Is continued growth sustainable? Well, the YouGov survey found 91% want to cook as much, or more, over the next 12 months, even as lockdown lifts. Although there are signs of online grocery growth slowing down, overall penetration – 36% of adults have had groceries delivered in the past year, according to Kantar – is unlikely to dip anywhere near previous levels. The conversion to online grocery is irreversible. “We could well be at a similar tipping point for the popularity of meal kits,” Benoist said. “There’s real room for expansion in the sector if those habits stick.”

His optimism is backed up by Kantar research shared with The Grocer today, which found 12% of all adults that haven’t tried a recipe box already are considering doing so in the next 12 months.

That would represent a significant uplift on the 7% of adults that have actually trialled a meal kit or recipe box service in the past year. More than half of them “have taken the plunge” and become a regular subscriber, Kantar found.

The scene is set, then, for a customer acquisition battle between the major players. It’s already underway with HelloFresh’s UK launch of sister brand GreenChef, offering diet plans including keto, lower carb, balanced, vegan and vegetarian. Gousto is pursuing variety, teaming up with “five of the UK’s favourite independent restaurants as voted by the public” to offer their signature dishes for preparation at home. For Mindful Chef, sustainability is the primary focus. (None are likely to set out their stall on price…yet.)

Timo Boldt, founder and CEO of Gousto, isn’t wrong when he says: “We’re only scratching the surface of the huge opportunity ahead.”