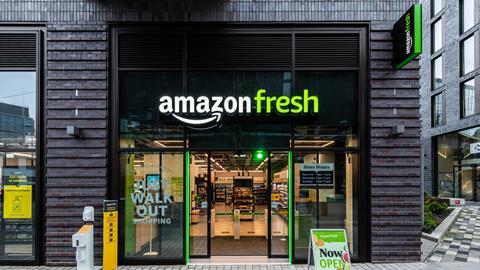 Could Amazon really be bigger than Tesco within four years?

Amazon will become the UK’s largest retailer in terms of gross merchandise value within the next four years. That’s according to Edge by Ascential, which reckons the e-commerce giant will best Tesco – the current number one – and make £77.1bn worth of UK sales in 2025, versus the supermarket’s forecast £76.1bn.

It would be an impressive feat given last year, Amazon UK’s total sales were ‘only’ £36.3bn. Tesco’s sales were almost double that at £64bn.

The might of Amazon looms across the western world. This week the company was named as the biggest investor in the US. It is becoming a even more formidable force in the UK too, last month announcing it will create more than 10,000 new permanent jobs this year as it opens four new CFCs up and down the country.

But despite its almighty size, there is one nut Amazon still can’t seem to crack: grocery.

Even after online’s share of grocery soared to a record of 15.4% in February [Kantar] and has only receded slightly since, Amazon “still represents a relatively small player” in food, Edge by Ascential says. Without the capacity, coverage or brand association to power grocery sales, neither Amazon offering free delivery on Fresh groceries to the estimated 15 million UK Prime members [Mintel] last summer nor the arrival in March of the first of several convenience stores in London have resulted in a share of sales boost to concern incumbents.

Indeed, GlobalData data shows only around 5% of Brits have ever bought food from Amazon, and typically those have been ambient goods from the main Amazon.com channel.

Ranking retailers based on total food sales, Edge by Ascential predicts practically no change by 2025, with the exception of Aldi leapfrogging Morrisons into fourth place. Amazon will grow of course – more than doubling its food sales – but remain a relative minnow in 15th place (up from 19th).

That’s assuming Amazon doesn’t play either of the two aces up its sleeve. The first being its backing of Deliveroo – now the chosen rapid delivery channel partner of Co-op, Sainsbury’s, Waitrose, Aldi, Morrisons and McColl’s. Not only could it use Deliveroo’s data to know exactly what groceries people want, where and when, a few savvily placed dark stores and competitive pricing could see it become the number one convenience retailer on the platform (it already has two own-label food ranges).

The other card is its deep pockets and willingness to spend big without a need for fast returns. Industry experts have long predicted Amazon could acquire a big four supermarket. Morrisons would be an obvious choice, given its existing close relationship. But others think Tesco could be in its sights. David Sables, CEO of Sentinel Management Consultants, predicted at the start of the year that “if Amazon wants to do something properly, you’ve got a gift of 30% of the market right there. Why would Amazon leave Tesco in the market as their competitor when they have the choice?”

If that were to happen there would be only one answer to the ‘who’s biggest?’ question, and perhaps for good.