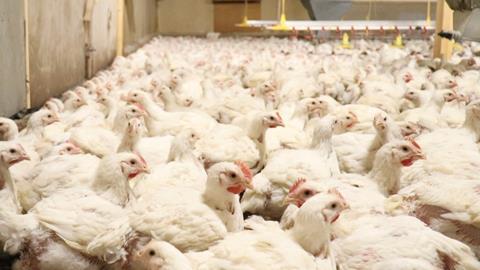 It’s time the poultry sector faced up to welfare concerns

Poultry processors could be forgiven for reminiscing about last year’s CO2 crisis, after another hammering in the media last weekend raised fresh animal welfare concerns.

Chickens reared by Moy Park and 2 Sisters Food Group were “collapsing under their own weight” and spending their final days in pain because they were bred to grow too quickly, according to a Times report on Saturday.

Fast-growing, genetically selected chicken breeds accounted for the majority of chickens farmed in the UK and allowed the industry to maximise production and profits, the report claimed. These birds take about 35 days to reach maturity, rather than the 56 days it takes slower-growing chickens to become ready for slaughter.

Importantly, such breeds are fully approved. But in undercover images (reminiscent of the top-heavy US birds the UK has been so keen to differentiate from) these ‘FrankenChickens’ were shown suffering a range of medical complaints, from chronic leg disorders to lameness and even heart attacks.

As The Grocer’s poultry category report showed just last month, Brits can’t get enough of chicken. Indeed, supermarkets shifted an extra 12.9 million kilos of frozen and fresh chicken during the past year, a rise of 2.3% [Kantar 52 w/e 24 March 2019], helping chicken sales grow to just under £2.2bn.

At the same time, the sector is facing a heightened level of scrutiny, with The Times’ report merely the latest in a growing line of animal welfare exposés to hit the industry in recent months. So what now?

Campaigners suggest getting the sector to sign up to the Better Chicken Commitment would be a good start.

However, M&S and Waitrose are still the only major supermarkets to have signed up to the BCC. Industry insiders have long argued the scheme would add too much cost to chicken – that and it’s not needed.

The British Poultry Council last month suggested the UK’s “world-class, heavily regulated, science-based, and continually improving” industry meant it was not necessary for supermarkets to sign up to the BCC.

But now the sector is facing an increasingly worsening image problem, one that risks undermining its robust defence of UK standards in the face of a post-Brexit flood of poultry imports.

However, it looks like it’s starting to wake up to this issue. BPC CEO Richard Griffiths today said a debate was already underway within the poultry sector over a way forward.

“We’re in a better place now than 10 years ago, and the rate by which science and technology is developing means that 10 years from now will also look much different,” he said.

“Will the future look like the Better Chicken Commitment, or will it look completely different? Now is the time to decide what we, collectively as a nation, stand for when it comes to welfare, and have an honest discussion about what the future holds.”

This won’t come a moment too soon. If the sector is to thrive post-Brexit, British poultry standards need to be obviously better than cheap imports.