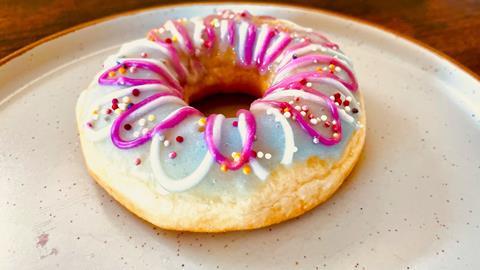 Love at first bite: why Urban Legend’s high-tech doughnuts are a game-changer

Everyone loves doughnuts, right? After all, there isn’t much to dislike about fried dough topped with icing and sparkles. It’s why Krispy Kreme has achieved global domination, with Brits buying them in the bucketload as they forgo cupcakes for the transatlantic treat.

But there is one big problem with these little rings of joy. Namely, their calorie count.

Until now, that is. Because former Graze boss Anthony Fletcher has created a doughnut that rings in at fewer than 160 calories.

Eschewing the high-sugar toppings and deep frying common to regular doughnuts, Urban Legend’s are made at a specially built factory, where they are ‘set’ with steam rather than fried, before a micro layer of fat is deposited on them to mimic the taste and texture of fried doughnuts.

The toppings, meanwhile, are touted as being made with “alternatives to sugar discovered in melons, pears, roots and leaves”.

I know what you’re thinking: it’s too good to be true, right?

Wrong. Urban Legend’s doughnuts don’t just look good, they taste good too. Seriously good. They are sweet, not cloying, without any weird artificial flavours. The mouthfeel is on point. If you did not know you were eating a ‘healthy’ doughnut, you would not be able to guess. It is, quite frankly, astounding.

It’s a testament to the potential technology has to transform our health when it comes to the foods we consume. Because, like it or not, there has always been a bit of a trade off when it comes to making healthier choices with diet. There are those, of course, who will claim that a handful of tree nuts and raisins tastes actually tastes better than a huge chunk of Dairy Milk. But they’re lying.

Implicit in the drive towards health has always been the understanding that shoppers will have to cut back on the things they really love to get fitter and live better.

Despite laudable efforts to reformulate as a response to policies such as the sugar tax and the government’s new HFSS rules, many healthier options of indulgent classics simply don’t stack up on taste. Until very recently, the idea that you could really replicate the sensation and satisfaction of fat, salt and sugar with anything was pretty questionable. In the light of this doughnut, it doesn’t seem so far off.

Indeed, now it looks like we could soon see an explosion of brands and products which have been designed from the ground up to be healthy but taste unhealthy using cutting edge technology.

Because Urban Legend isn’t the only one doing it. Rather, Fletcher’s brand is part of a small vanguard of suppliers hoping to turn the whole idea of ‘healthiness’ in food and drink on its head. There’s also the likes of Mindful Snacker, for instance, the startup crisp brand which makes its crisps with a proprietary process involving three different ovens to remove moisture from potatoes before seasoning and bagging.

The list of names doing this is small for now, because a lot of the technology and processes being used are experimental and therefore expensive: Mindful Snacker’s kit, for instance, costs a whopping £20m. But that will likely change should brands like these prove their worth on the market.

One suspects they will not find it hard to grab shoppers’ attention. Because, aside from winning the lottery, isn’t being able to eat whatever you like with no detriment to your health everyone’s deepest fantasy? Were it to become possible thanks to technology, it could completely revolutionise our approach towards nutrition and diet.

It may just be a small doughnut. But what it represents is utterly thrilling.

As Homer Simpson once put it: “Doughnuts… is there anything they can’t do?”