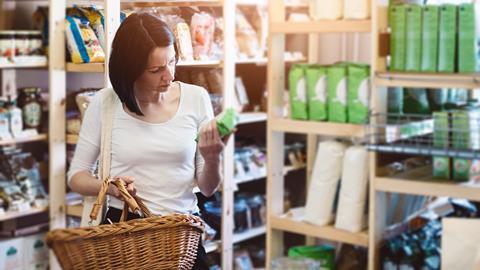 Let’s look at how effective labelling could save the world.

International research released today by the Carbon Trust suggests two-thirds of shoppers back the idea of a recognisable label to demonstrate that products have been made with a commitment to measuring and reducing their carbon footprint.

The YouGov-powered study of more than 9,000 people across the US, UK, Italy, Canada, Spain, the Netherlands and Sweden also found the majority (66%) would feel more positive about suppliers that could demonstrate they were making efforts to reduce the carbon footprint of their products.

“There is a real transformative power in getting consumers to change their everyday purchasing decisions to favour low-carbon products, said Hugh Jones, the Carbon Trust’s MD for business services.

“Consumers cannot make better choices without reliable information and, as the research shows, there is strong appetite to understand the climate impact of products.”

Indeed, the Carbon Trust launched its own carbon footprint certifications in 2007 – the world’s first, it claims – to allow brands to make independently verified claims about the eco-cred of their goods.

Quorn, Tesco, Greggs, ABP Food Group and Bacardi are among those that sport either the Carbon Trust Standard or the organisation’s Product Footprint Certification.

Opinion: How sustainable coffee is going beyond the reusable cup

Which is all well and groovy. Such eco-conscious labelling allows shoppers, at least in theory, to more easily browse busy segments for groceries that suit their own sustainability sensibilities – and a single, identifiable, consistent carbon footprint stamp ought to help.

Currently, however, there are two such labels from the Carbon Trust alone. They have differing measures – and, arguably, they aren’t as well-known as kitemarks from, say, Fairtrade, Red Tractor or the Rainforest Alliance.

Supermarket shelves, you see, are awash with green-minded stamps of approval. My colleague Julia Glotz wrote recently: ‘In today’s post-Blue Planet landscape, sound environmental credentials are increasingly on a par with basic food safety. Shoppers expect it as a matter of course, not as a bonus feature.’

Suppliers are taking note. And that’s fantastic. But it’s also threatening to cause maddening confusion for punters facing a wall of right-on claims, which are growing in number as manufacturers and retailers abandon third party certifications for their own. Both Cadbury and Sainsbury’s own-label tea, for instance, have controversially dropped Fairtrade, in favour of Cocoa Life and Fairly Traded respectively.

It ought to also be noted that not all standards are as rigorous as others. Some bodies have even been accused of aiding and abetting greenwashing by businesses.

Obviously, rigour and transparency are vital to allaying concerns of environmentally aware consumers. Simplicity and consistency looks increasingly necessary, too. Grocery has the power and will to make it happen.

If retailers and suppliers can come together with government and NGOs on the Wrap-led UK Plastics Pact, there seems to be no reason they couldn’t also all put their heads together on similar projects, for the better of the planet and shoppers’ sanity.