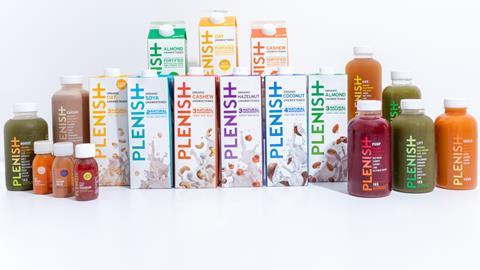 No one could accuse Britvic of acting with a sense of urgency in its efforts to gain exposure to the booming plant-based market.

The takeover of milk alternative and juice brand Plenish this week is the group’s first deal in Europe in more than a decade (it bought Teisseire owner Fruité Entreprises in 2010).

Like its slow-moving UK-based soft drinks rivals Nichols, AG Barr and Lucozade Ribena Suntory, the closest Britvic has come to plant-based until now is reformulation of its fruit squash.

It has a lot of catching up to do when compared with drinks giants Coca-Cola and PepsiCo. The former was something of an early adopter thanks to its Innocent deal, while the latter struck an eye-catching partnership with Beyond Meat earlier this year, not to mention its minority stake in Rude Health here in the UK. Danone also made a massive $12.5bn plant-based bet in 2016 when it agreed to buy Alpro owner WhiteWave.

So exactly how big a deal is Britvic’s purchase of Plenish?

While it’s certainly an important strategic play, it won’t move the dial in terms of profits or sales  – at least not in the short term. Britvic conceded as much in its announcement to the London Stock Exchange, stating the immediate value of the transaction was “not material enough to impact adjusted EBIT in 2021”.

Indeed, Plenish is tiny in comparison to the big players in the UK milk alternatives category, with Alpro boosting retail sales 21% to £181m last year, while Oatly, which is in the midst of lining up a $10bn IPO in the US, almost doubled its value to £84m [Nielsen 52 w/e 2 January 2021].

Britvic didn’t release any figures for Plenish, and the abridged accounts at Companies House only show the business, like many startup challenger brands, was making considerable losses (not that it matters any more with Britvic behind it).

However, Britvic thinks it can accelerate momentum at the fast-growing brand using its strong relationship with the major retailers, as well as its supply chain capability and distribution reach.

Plenish currently has listings for its plant-based milks with Sainsbury’s, Waitrose, M&S, Ocado and Amazon. There is some crossover for its cold-pressed juice and functional shots ranges, so there is plenty of room to strengthen ties and win space in Tesco and others.

Founder Kara Rosen has done an incredible job at building and evolving the brand since she started making juices in her own kitchen in 2012.

And what it lacks in size, it more than makes up for in other areas, with high-quality ingredients sourced sustainably from organic farms, and lack of additives used to make its alternative milk drinks providing ample differentiation from market leader Alpro. That could make it a welcome addition for Britivic, whose portfolio of concentrates and fizzy pop doesn’t exactly scream ‘healthy’, despite admirable work in reducing calories and sugar.

GB MD Paul Graham told The Grocer in an interview earlier in the week that Plenish’s direct targeting and understanding of what it can bring to the consumer was more advanced than at many of Britvic’s brands.

“There is a lot of stuff Plenish can add value to in terms of how to operate with that level of flexibility, agility and speed in the market that you are going to need to win,” he said.

Plenish also puts a big tick in the sustainability box for Britvic as well, given it is an accredited B Corp and certified carbon-negative business.

Although the price tag for the deal is undisclosed, it will have been a drop in the ocean for Britvic. For that small investment, it looks to be getting a lot in return. Plenish adds a genuine health and wellness brand to the lineup, brings digital knowhow, opportunity for more innovation, plenty of room for retail growth and top ESG credentials.

Britvic will hope the move into plant-based is a case of better late than never – though there is still lots more to do if it is to fully take advantage of opportunities in the market.