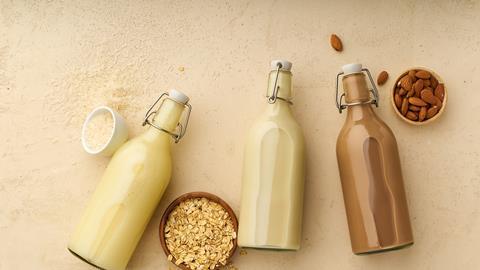 The plant-based milk revolution is upon us, spearheaded by the younger generations. Sustainability and animal welfare are key reasons for purchase, but taste has emerged as a crucial driving factor. And an even better taste would persuade shoppers to try another brand 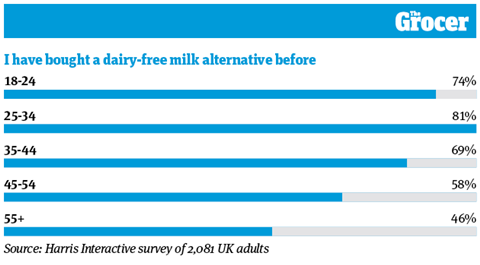 That rate of trial is even higher in the case of young consumers. Among 25 to 34-year-olds, 81% said they had bought a plant-based milk before. That figure fell to just 46% of the 55-plus age group.

Dairy-free milks also have a higher appeal among more adventurous eaters. Three-quarters of those who described themselves as “very interested” in trying new foods and drinks had bought one of these products before. Only 33% of respondents who were “not that interested” said the same.

Once you try a dairy-free milk, you’re likely to buy it again. At least, that’s what the results of our survey suggest. Of those who had bought a plant-based milk before, 70% said they bought the products at least once or twice a month. And 37% did so once a week or more, which suggests these milks have become part of their routine grocery shop.

In keeping with our last chart, young people are more likely to be regular buyers of plant-based milks. A staggering 53% of 25 to 34-year olds who bought plant-based milks did so on a regular basis, at least once a week. That compared with just 27% of the 55-plus age group.

3. The majority of these shoppers buy more than one milk 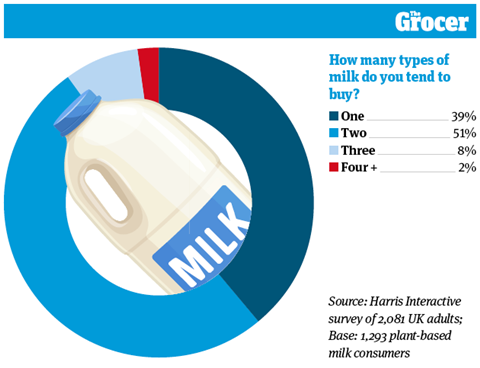 For plant-based shoppers, one milk isn’t enough. Only 39% said they had just a single type of milk in their fridge. Meanwhile, half had two milks and 10% had three milks or more. This pattern of behaviour is fairly consistent across all demographics.

It suggests that plenty of shoppers are buying dairy milk, as well as dairy-free alternatives. Glebe Farm, which makes an oat drink, says this is often down to catering for different members of the household.

“It is becoming common for households to have a range of milks to cater for different preferences. Oat may be the favourite for one person while dairy is preferred by another,” says Rebecca Rayner, director at Glebe Farm Foods.

4. Cereal is the most common use for plant-based milk 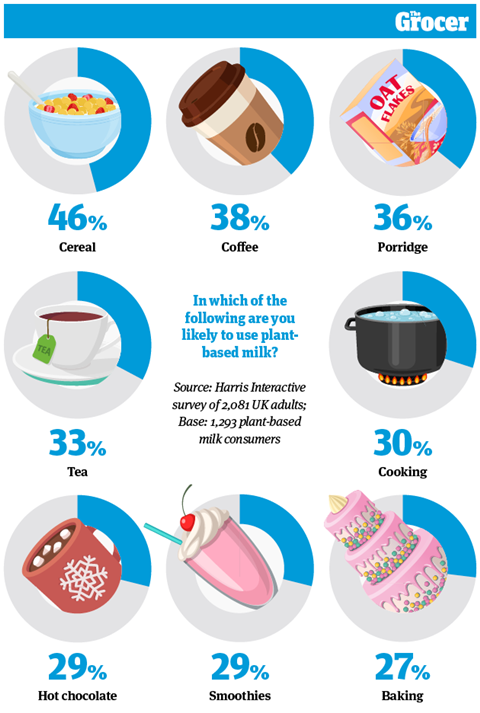 Plant-based milks can be used in just as many occasions as standard milk. That’s been the consistent message from manufacturers of dairy-free alternatives – and this chart suggests that communication is getting through.

Shoppers in the category regularly use dairy-free milks for coffee, tea, smoothies and cooking, with cereal topping the list in popularity.

There were some demographic differences here. Younger people are far more likely to use plant-based milk in their coffee.

By contrast, cereal was a popular use for plant-based milk among all age groups in our survey.

5. Taste is one of the primary drivers of plant-based milk purchases…

There are multiple reasons why shoppers buy plant-based milks. As with the wider grocery category, taste is king – but plenty of other factors follow closely behind.

More than four in 10 shoppers said they enjoyed the taste of dairy-free milks. However, a similar number also saw their environmental and animal-free credentials as key points in their favour.

“Taste is vital for any food and drink products and plant-based milks are no exception,” says Rayner at Glebe Farm Foods. “It’s notable, however, just how critical environmental concerns are in the decision-making process.”

6. …and many prefer it to standard milk 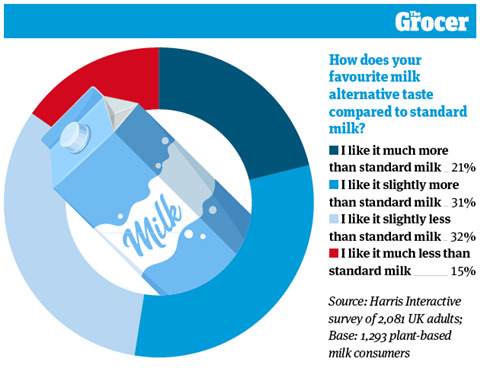 Plant-based milks are no longer the poor relation of their dairy cousin. Half of shoppers said they actually preferred the taste of their favourite dairy-free alternative to standard milk. That was higher than the 47% who leaned towards the taste of dairy.

Those taste preferences seemed to change with age. Among the 25 to 34-year-old age group, the clear majority –68% – preferred the taste of plant-based milk. That trend reversed among the over-55s, only 35% of which preferred plant-based milk.

Dairy-free milks also emerged as a particular hit among Londoners. In the capital, 65% said they preferred their taste, compared with 42% in the south west.

7. Almond milk is seen as the healthiest 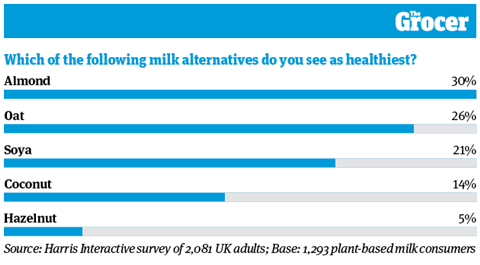 It’s little wonder almond milk is seen as the healthiest of the plant-based milks. After all, it is low in calories – unsweetened versions can contain less than 20 per 100ml.

However, our results show there is no clear winner in the plant-based world. While 30% saw almond milk as healthiest, 26% believed oat milk was healthier and 21% veered towards soya. And certain demographics – women and the 55-plus age group – saw almond and oat milks as equally healthy.

That’s partly because there are varying definitions of health, says Rayner at Glebe. “While this can tie in with perceived health benefits of the core ingredient, we also recognise that clean labels are of continuing importance,” she says.

8. The majority of shoppers are concerned about clean labelling 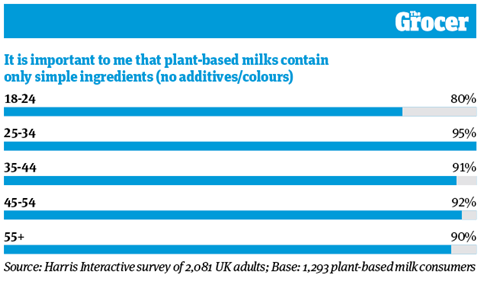 This brings us neatly to our next point. Nine in 10 of our total sample said they wanted their plant-based milk to have a clean label. In essence, that means simple ingredients with no additives or colours.

Support for that concept was almost universal across all age groups. Even among the under-25s, who were least concerned, 80% said a clean label was either very or quite important to them.

“Even so-called ‘healthy products’ can use unpronounceable ingredients and we feel that this can lead to confusion and suspicion,” says Rayner of Glebe. “If a product can be made simply with just a handful of well-known ingredients, taste great and deliver against usage requirements, why add anything else?”

9. Scotland is the most brand-loyal 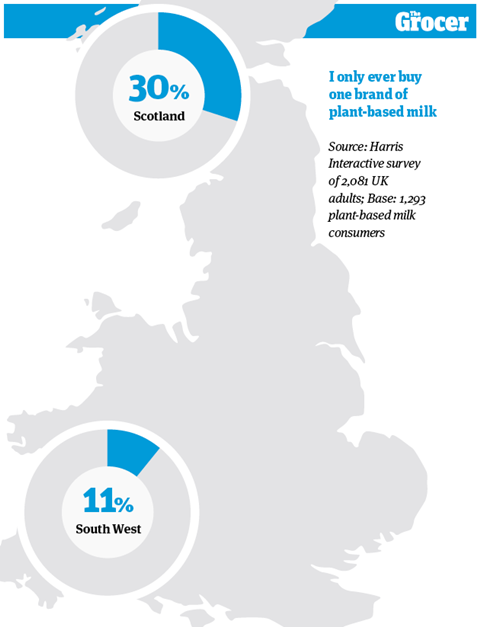 Plant-based consumers like to shop around. Four in 10 say they buy a mix of milk alternative brands. Meanwhile, only 20% stick to the same one every time.

However, the most loyal of the bunch were Scottish consumers, 30% of which buy only one brand of milk alternative. Loyalty was at its lowest in the south west, where only 11% said the same.

There were other demographic differences in loyalty. Younger consumers, for example, were more likely to stick with one brand. Among 25 to 34-year-olds, 28% said they always bought the same one. Among 55+ consumers, that figure fell to just 14%.

Perhaps surprisingly, consumers who were more adventurous in their food tastes were also more loyal to one brand than the less adventurous.

10. Taste and price would persuade shoppers to try a different brand 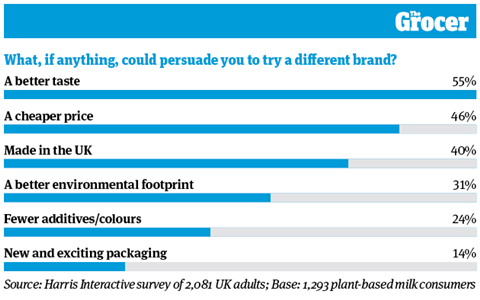 If loyal shoppers were to try a new brand, it would have to meet certain criteria. Over half of consumers who mostly stuck to one brand said taste would persuade them to break with their routine. That was closely followed by price. Packaging was least likely to tempt shoppers away.

That four in 10 would choose a brand made in the UK points to a wider trend, says Glebe. “The last few months of restrictions and ongoing Brexit discussions seem to have driven a focus on ‘made in the UK’, and we think this will continue as consumers want to not only support local businesses but also buy into products that have the lower carbon footprint,” says Rayner.