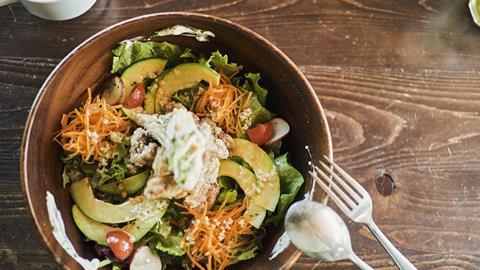 As Veganuary kicks off, organisers are once again expecting record sign-ups in the UK. So which region is most likely to engage? To what extent are long-term habits formed? And which products benefit most? Lumina research for The Grocer uncovers the key behaviours

1. People in the capital are most likely to take part in Veganuary annually 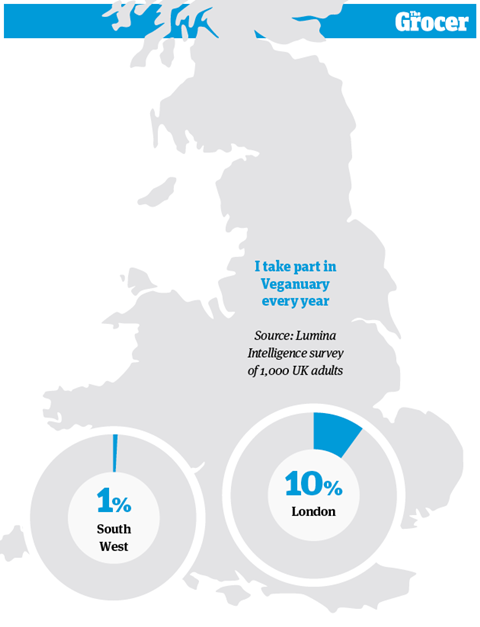 Since its launch in 2014, Veganuary has rapidly grown in popularity. In fact, its organisers forecast over two million people will have taken part globally by the end of this month. In the UK, participation varies significantly by region. In London, 10% said they took on the challenge to cut out meat, fish and dairy every year. That level of interest was highest in the country, followed by West Midlands, where 7% make Veganuary a yearly pursuit. By contrast, the least engaged region was the south west, where more than half (55%) had never taken part and didn’t intend to. In terms of age groups, 35 to 44-year-olds are most likely to participate every year (10%).

2. Health is the most popular reason for taking part in Veganuary 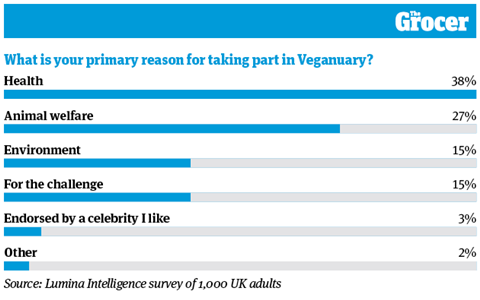 As climate change dominates the headlines, there has been plenty of talk about the environmental benefits of a plant-based diet. However, this is only the third most popular reason for taking part in Veganuary, according to our survey. In fact, the same number of people (15%) said they took part in Veganuary mainly for the challenge.

Health topped the table, with 38% of Brits choosing it as their primary reason, although it was more popular with male (47%) than female consumers (25%). There was also a notable split between the sexes when it came to animal welfare, with 40% of women choosing this option compared with 17% of men. Celebrity endorsement only influenced 3% of respondents.

3. The majority of Brits keep eating plant-based after Veganuary 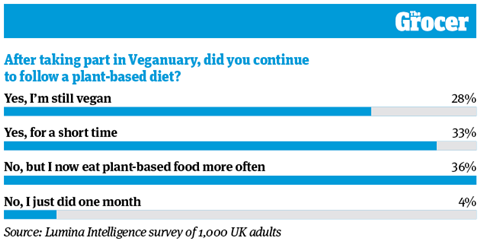 A plant-based diet is for life, not just for Veganuary. That’s the case for 28% of the 101 Veganuary participants in our poll, who say they have followed a vegan regime ever since.

In fact, most participants say the challenge has had a long-term effect on their behaviour, with 36% eating plant-based food more often and a third continuing a vegan diet for a short time. Retailers and suppliers have a role to play in facilitating this switch, according to Fikerte Woldegiorgis, foods marketing director at Unilever UK&I. “It’s important to offer shoppers plant-based offerings from brands they know and love to help make picking up that plant-based product that bit easier”, she says – especially around “peak times” such as Veganuary.

4. Brits are least likely to swap fish for a plant-based alternative 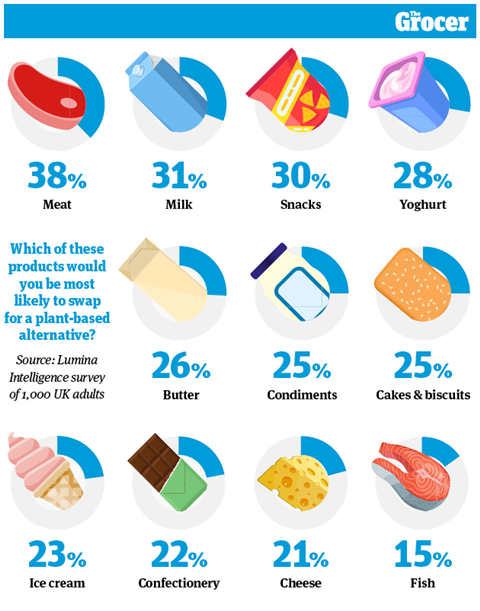 Considering the amount of innovation and investment in the meat alternatives market, it’s no surprise that Brits would be most willing to swap out meat for a plant-based substitute.

The same logic could also explain why fish is the least popular choice (15%), as fish alternatives are only just starting to receive the same attention. Plant-based cheese alternatives were only marginally more popular (21%).

Excluding meat and dairy, snacks and condiments were the most popular swaps. Unilever’s Woldegiorgis believes shoppers are buying into the latter as a “simple swap”.

“Cooking plant-based dishes can be a challenge, however vegan condiments are a great way to add a dash of flavour and excitement,” she says.

5. A third of Brits would be happy to eat a plant-based picnic 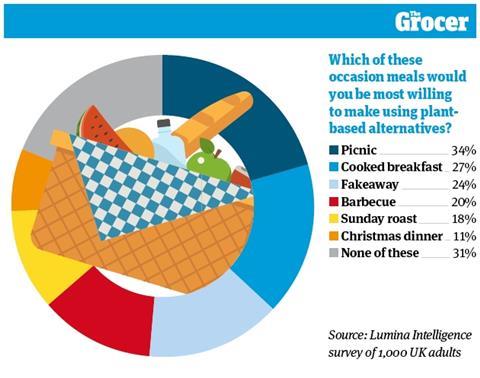 Forget scotch eggs and cheese sarnies: a growing number of British picnic hampers are being filled with vegan fare. When presented with a list of occasions they would consider making vegan, a third of respondents named a picnic, while 24% would opt for a vegan fakeaway. The latter is being aided by trend-led innovations, such as Hellmann’s Vegan Baconnaise, Woldegiorgis says.

At the other end of the scale, Brits would be least likely to swap their Christmas dinner (11%) or Sunday roast (18%) despite the raft of alternatives available. According to Woldegiorgis, “shoppers are drawn to easy switches” rather than compromising on traditional,much-loved occasions.

6. Natural ingredients matter the most when choosing a product 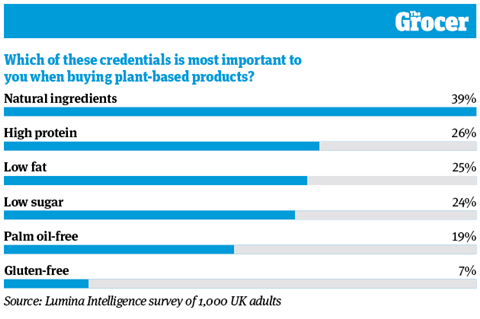 When it comes to creating plant-based products, brands would do well to go au naturel. As our data shows, 39% of Brits think natural ingredients are the most important credential when choosing a plant-based diet, with 25 to 34-year-olds particularly favouring natural options (42%).

Given that health is a key motivation for taking part in Veganuary, it’s no surprise that health-related factors such as high protein and low fat also ranked highly.

On the other end of the scale, being free of palm oil lagged near the bottom of the table as an attribute, although it was a more important factor to women (24%) than men (14%). This credential also over-indexed with the 55 to 64 age group (26%).

7. Taste is the biggest barrier to following a plant-based diet 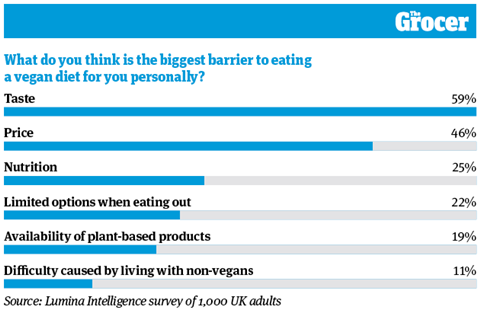 Our data shows 38% of Brits have never taken part in Veganuary and don’t intend to in the future. So what’s stopping them? Our survey revealed taste is the main barrier to trying out a vegan diet, cited by 59% of respondents.

Perceptions of taste varied by age. While the over-65s were most likely to name this as a barrier to going vegan (66%), 18 to 24-year-olds were least likely (50%). Woldegiorgis knows consumers “don’t want to compromise on taste” when buying into vegan products and believes “this is where brands come into play, as they provide trust and reassurance to shoppers”. The next largest barrier is price (46%), which over-indexed with 45 to 54-year-olds (53%).

8. Young Brits are most likely to pay more for plant-based products 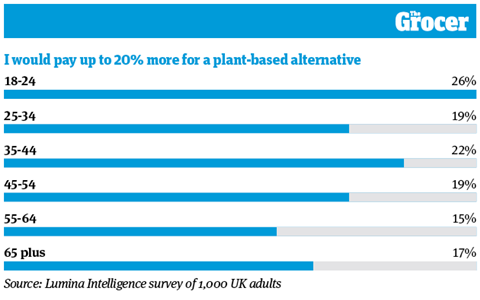 The price of plant-based products may be a sticking point for some consumers (see chart seven) but many are willing to pay a premium. That’s especially true of younger shoppers. The 18 to 24-year-old age group was most likely to pay up between 11% and 20% more for a plant-based alternative (26%), while the 25 to 34-year-old demographic was most likely to pay 21% to 30% more (15%). Meanwhile, in the two oldest age groups, 56% said they’d only spend up to 10% more.

This is consistent with Kantar research shared by Unilever, which shows 28 to 35-year-olds are spending the most on vegan mayo. Woldegiorgis puts this down to the younger generations being “most open to trying new things”.

9. Brands are more likely to tempt shoppers than own-label 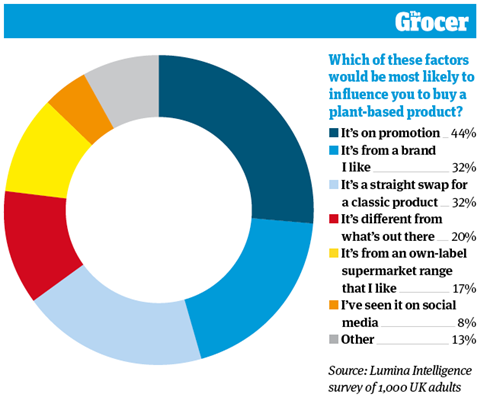 Although “perceptions of plant-based diets have changed significantly in recent years”, Unilever’s Woldegiorgis believes “some shoppers are still nervous when first experimenting with the category”. For that reason, she says “shoppers are looking for simple swaps from trusted brands”.

This could explain why Brits are more tempted to buy a plant-based product from a brand they like (32%) than a retailer’s own-label range (17%). A third of shoppers would also buy a plant-based alternative if it was a straight swap for a classic product, rather than an entirely new concept. That said, Brits are most influenced by promotions (44%), suggesting price remains important despite shoppers accepting a premium (see chart eight).

In the over-65 age group, by contrast, only 38% of non-vegans adopt the same habits.

Whether vegan or not, shoppers tend to be open to trying out new products. Only 16% of Brits have favourite plant-based products they always stick to – so Woldegiorgis believes “shoppers want to see new products appearing within the category”.