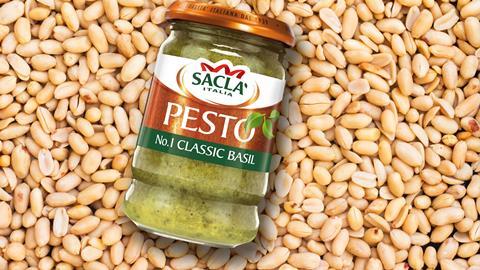 Pesto crisis: is the UK's recall system fit for purpose?

How did it take up to a month from the first warning signs of peanut contamination for products to be recalled?

Pesto is well and truly off the menu. Recent weeks have seen supermarket shelves stripped of the sauce amid fears a swathe of branded and own-label products could have become contaminated with undeclared peanuts.

The crisis began in December, when market leader Saclà recalled 19 SKUs after discovering cashew nuts used as an ingredient from an external supplier may contain traces of peanuts. It was followed by similar recalls of own-label pestos by Sainsbury’s, then Tesco.

The recalls have resulted in a nationwide pesto shortage, with some shops having stopped stocking it altogether (when The Grocer visited Sainsbury’s Queens Road, Brighton store, on Tuesday 14 January, all pesto facings had been replaced with pasta sauces).

Given the severity of peanut allergies, the crisis has also raised questions over how long the potentially contaminated products were on shelves.

Saclà took 12 days to issue its recall after the alarm was first raised on Twitter, as The Grocer revealed last week, while Tesco recalled its products almost a month after fears around Saclà’s products were first raised.

8 December: A Twitter user contacts Saclà, claiming his wife, who is allergic to peanuts, has suffered a reaction to its pesto.

17-18 December: Initial results show no presence of peanuts, but a second round of testing shows potential contamination.

9 January: Sainsbury’s recalls a host of its own-label pestos over peanut contamination fears, admitting it shares a raw ingredient supplier with Saclà.

10 January: Tesco follows suit, recalling several of its own-label pestos. But tweets show Tesco was first alerted to a possible contamination as far back as 31 December.

How did peanuts end up in the cashew chain?

There are numerous ways peanuts - or peanut traces - could have ended up in the cashew chain, says Allergy Action’s Dr Hazel Gowland.

“It may be that they’ve been shelled on the same equipment, or possibly up the line there’s been a deliberate substitution because cashews are costing too much - sometimes this happens and it is transparent, sometimes somebody is covering something up.”

Whatever the case, Saclà has laid the blame squarely at its supplier’s feet, announcing it had kicked off an “in-depth investigation” into the incident. “Our primary focus is on how these cashew nut supplies could have been contaminated, and how we can be sure that it can never happen again,” says a spokesman for the brand.

So are Sainsbury’s and Tesco, which have since confirmed that while their own-label pesto was not made by Saclà, they shared the same, unnamed, raw ingredients supplier.

Tesco says it checked its supply chain immediately after Saclà’s recall. “As Saclà do not supply our UK own-brand pesto, no further action was taken at the time,” a spokeswoman says.

“However, once it was identified that the issue was connected to a supplier of cashew nuts that we share with Saclà, we took action to put in place this precautionary recall.”

A Sainsbury’s spokeswoman says that although it shared a raw material supplier with Saclà, “our supplier believed that they had not received any affected batches” and “launched our own investigation as soon as the issue was brought to our attention”.

Why did it take so long to recall the products?

The glaring problem is the sheer time it took to get products off the shelves.

Saclà was first alerted to a potential problem on 8 December, when a shopper tweeted the brand claiming his wife had suffered an allergic reaction to one of its pestos.

The brand says it contacted the customer immediately, requesting product details and batch codes, and engaged two independent laboratories. Initial results, received on 17 and 18 December, showed no contamination, but a second batch of tests detected peanuts. “We acted as swiftly as possible to establish whether any contamination had taken place and then immediately withdrew implicated products from sale,” says the spokesman.

Tesco was even slower. Its own recall, which took place on 10 January, happened almost two weeks after similar concerns were raised on Twitter, with one shopper tweeting on 31 December they were “currently sat in hospital with my one year old after an allergic reaction to your pesto”.

Under EU regulations, any food business with reason to believe that a food it has made is not in compliance with food safety requirements “shall immediately initiate procedures to withdraw the food in question from the market”.

“In the middle of these live incidents a day can go quite quickly,” says one industry source. “But not 12. Even if you follow the obvious incident trail from the FSA to Tesco and the brand, you should end up with a much shorter timeframe.

“If this had been a microbiological contamination it would have been nailed by the epidemiologists in about half a day, two days max. And we’d all have been p***ed off we couldn’t buy any pesto.”

However, Dr Rachel Ward, fellow at the Institute of Food Science & Technology, says deciding when to recall is not a straightforward process.

“[A shopper] could have had a reaction as a result of multiple different food safety problems. I have seen businesses run down rabbit holes looking for peanuts only to find out the consumer is actually allergic to hazelnuts - which means the supplier is less able to respond to the wider market. You cannot make assumptions.”

The biggest challenge in situations like this, she says, is “the ability to access accurate data rapidly enough. The timing issue is nearly always down to the challenges of accessing data down the supply chain.”

The FSA says it “took action to publicise these recalls as soon as we had enough information”.

“We certainly believe the current process is fit for purpose,” it adds.

Our source maintains things should have moved faster. “The shelves being denuded of pesto is not the end of the world.” He suspects “retailers were worried it would be apparent they’re all buying their pesto from the same sources”.

But he adds: “It’s not about explaining what’s gone wrong but preventing it in the first place. This is one of those ‘never events’ that really shouldn’t happen. They should be testing third party ingredients and the products they send out.”

The Saclà spokesman insists the brand “conforms to all relevant legal standards for testing of raw ingredients and finished product”.

And Ward says more testing is not a solution in itself. “They all do that every day. UK retailers routinely scrutinise their supply chain. Analytical testing is not the answer.

“This is about competency in the supply chain with a robust quality assurance programme that matters. And even then, people make mistakes. You cannot prevent that.”

When will pesto be back on supermarket shelves?

Saclà, Sainsbury’s and Tesco say their products will return to shelves shortly, with updated packaging stating they may be unsafe for peanut allergy sufferers, rather than new recipes.

“This is taking an ‘alibi labelling’ approach, when it would have been fairly straightforward to find a source of ingredients that didn’t include a risk of peanut contamination,” says our source. “It’s exactly the opposite of what the regulator wants.”

Plus it risks alienating long-standing shoppers. “Consumers will have been used to buying a peanut-free product,” says a second industry source.

Still, Ward says, as long as it is clear on the packs, this is best practice. “Put a little flash on it or change the colour. There should be some visual prompt.”

Yet, after almost a month of disruption, this saga will no doubt have left a sour taste in shoppers’ mouths.