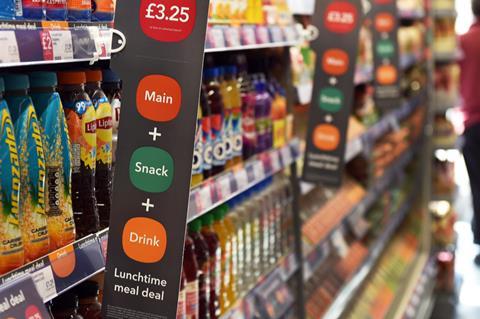 Removing HFSS products from prime locations in supermarket aisles is “more impactful” in the fight against obesity than raising the prices of unhealthy products, research has shown.

Making high fat, salt or sugar products less visible in stores would have more of a direct influence on shoppers’ decisions to buy than selling unhealthy products at full price, according to a study by GS1 UK.

A study by GS1 UK showed that banning unhealthy products from prime locations, such as aisle-ends and checkouts, would have “a far greater impact on the nation’s health” than rising prices.

Just over 60% of shoppers said that making HFSS products less visible in-store would have a direct influence on their decision to buy, while just 26% would be dissuaded from purchasing unhealthy products even if they were only available at full price.

As the cost of living crisis puts a halt on some of the government’s plans to tackle obesity, specifically with the delay on bans on bogof deals and TV ads featuring HFSS products, health campaigners have criticised the government’s lack of action.

However, not all aspects of the government’s HFSS clampdown legislation have been postponed – plans to change store layouts are set to go ahead in October, and despite early reproval from the industry, many supermarkets are already gearing up for the upcoming changes.

“Our research not only proves that consumers want to make healthier choices, it also shows that the retail industry has the power to support them in making them,” said Sarah Atkins, CMO and membership director at GS1 UK.

“Despite continued uncertainty surrounding HFSS, we have seen unprecedented levels of collaboration since the legislation was first announced.

“By coming together, industry has made incredible progress in creating, capturing and sharing accurate product data that will enable businesses to respond to changing legislative and consumer demands, both now and in the future.”

However, the research also noted the growing challenge of health versus cost for consumers: while 68% agreed there was a need for anti-obesity legislation, 53% still said they would miss bogof deals on HFSS products.

GS1 UK added that many brands had done their part in reformulating products, but that retailers also held “a huge amount of influence when it comes to consumption” so will have a ”vital role to play in inspiring healthier choices”, particularly as costs continue to rise.

”By educating shoppers and guiding them towards healthier options, retailers have the power to improve the nation’s health, and help consumers solve the cost vs consumption conundrum.”