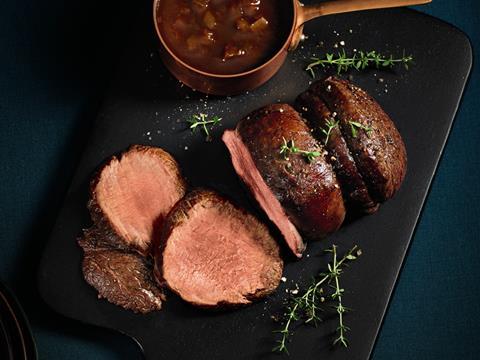 All Aldi meat is 100% British all year round

Aldi has surged ahead of Sainsbury’s to become the UK’s third-biggest retailer of fresh meat after Tesco and Asda.

According to Kantar Worldpanel data, Aldi had a 12.2% share by volume of fresh meat sales in the 12 weeks to 3 November, compared with Sainsbury’s 12% and Morrisons’ 9.4%.

In the same 12-week period last year, Aldi’s share was already level with Sainsbury’s 11.7%, and well ahead of Morrisons’ 10%, after sailing past the Bradford-based retailer in August 2018.

Aldi - which has an overall share of 8% - has overindexed on meat partly thanks to its continued expansion, but it has also significantly increased quality and range in recent years.

All its meat is 100% British all year round, and last year it introduced new 36-day aged sirloin and ribeye steaks, while this Christmas it unveiled a two-metre-long pig in blanket.

The number of meat SKUs has also continued to grow: it currently stocks 129, a near 30% increase since 2016 and around three times as many as it was selling 10 years ago.

Aldi’s performance is even stronger in terms of beef and poultry sales - with only Tesco now selling more.

Aldi has been the UK’s second-biggest retailer of beef by volume for over a year, edging past second-placed Asda in September 2018. Latest data from this November shows Aldi sells around 80 million packs of beef a year. That equates to a share of 13.3%, compared with Tesco’s 21.6%, Asda’s 12.7%, Sainsbury’s 11.5% and Morrisons’ 11.1%.

In the case of poultry, it moved into second place behind Tesco in August this year. Latest data for November shows Aldi sells around 100 million packs a year.

Julie Ashfield, managing director of buying at Aldi, said: “Our approach of providing outstanding quality fresh British products at the lowest prices is clearly resonating with shoppers. No one else can offer quality at the prices we do and we have become the go-to supermarket for millions of customers as a result.”