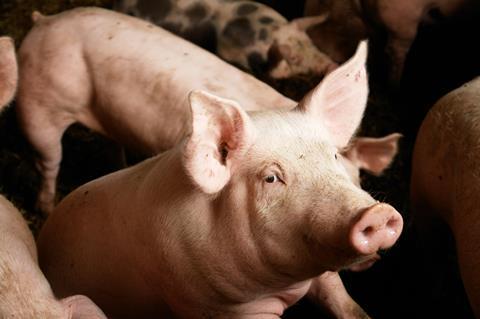 The government’s “well meaning” support package for the pork sector could have the unintended consequence of crashing pig prices and forcing producers out of business, the National Pig Association has warned.

Defra announced a detailed support package on 14 October to help ease the backlog of more than 100,000 pigs on UK farms, which had built up due to a shortage of butchers and the effects of the ongoing ban on European pork exports to China.

In addition to the introduction of six-month visas for up to 800 foreign butchers, the package includes a private storage aid scheme in England that will enable carcasses to be preserved and then processed at a later date.

However, a separate element in the package, which incentivises processors with a £3 per pig premium to put on additional shifts to increase throughput and ease the backlog, also threatened to drastically drive down pig prices, suggested NPA CEO Zoe Davies.

She said Defra, which was funding the premium (paid per additional shift) had not stipulated that agreed contract prices should be paid for so-called “distressed loads”.

This meant the distressed volume – where processors killed animals with minimal butchery for sale overseas – was still fed into AHDB’s Standard Pig Price (SPP) sample, and subsequently dropped the price by around 4p/kg every time data was collected.

The sluggish SPP, which already stood at its lowest level since May on 30 October at 142.23p/kg, was expected to fall even further over the coming weeks due to this situation, said Davies, who warned it could drop to the 100p/kg mark by Christmas, if the situation went unresolved.

It had already crashed three times in the past five weeks, she added. The SPP has also lost more 10% of its value since the end of July.

“It’s crashing the pig price every time a load is processed, and it’s coming at the same time producers are experiencing soaring costs of production,” she added.

“I have told Defra in no uncertain terms that whilst well meaning, I am sure they wouldn’t want their carefully constructed schemes, designed to bring more pigs through the system, to be responsible for the annihilation of the pig price and therefore the reason many more pig producers exit the sector,” Davies suggested.

The problem is that processors are being leant on by the RPA who seem a little overzealous in their role of ensuring that there is no price fixing going on and there is confusion as to legally what processors can and can’t do.”

A Defra spokesman said SPP prices “may move up and down”, dependent on supply and demand.

It comes as Davies also warned that it was “unclear” whether the Defra’s package would “have a significant impact on getting more pigs through plants and, if so, how long it will take before under-pressure pig producers start to see benefits”.

She noted the 800 butchers’ visas, for example, fell well short of the 10-12,000 butchery roles the British Meat Processors Association said still need to be filled. However, processors were hopeful they would be able to bring in extra butchers that would “make a difference”.

More than 10,000 healthy pigs have now been culled due to the backlog.