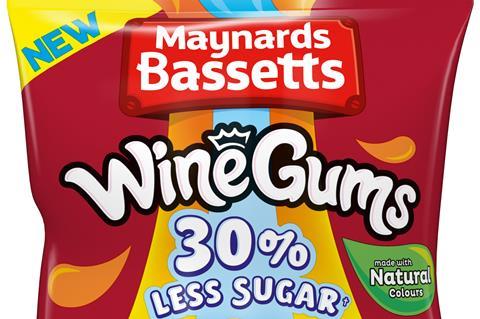 Sugar has been replaced by soluble fibre (polydextrose)

Made with soluble fibre (polydextrose) to replace sugar, the NPD contains 35g of sugar per 100g, compared with the 57.3g in regular Wine Gums. Calorie content in the new sweets is 14% lower at 282kcals per 100g.

The launch of Wine Gums 30% Less Sugar (rsp: £1.32/130g) came as “the less-sugar candy market was worth a significant £8.7m in 2018 and is growing 56% year on year” Mondelez said. “Furthermore, over a third of consumers are actively cutting down their sugar consumption.”

Wine Gums were “such a popular sweet with consumers already, so our new less-sugar launch is set to shake up sales for retailers even further” said Mondelez brand manager for joyful candy Anna Ulrich. “Shoppers are going to love the new variant. In fact, our consumer testing showed an impressive 84% purchase intent.”

Set to roll out in early July, the new Wine Gums follow Mondelez’s May launch of reduced sugar BelVita variant, and its August 2018 reformulation of Ritz to drastically reduce the crackers’ satfat.

More healthier treats are expected later this year from the supplier, including the hotly anticipated Cadbury’s Dairy Milk bar with 30% less sugar – which has already landed in Indian, albeit with a different recipe from the one set for the UK.