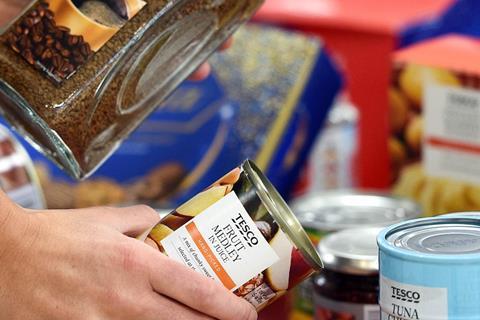 Tesco and Asda have both launched major initiatives in support of the UK’s biggest food redistribution organisations, ahead of what charities have warned is a hunger crisis facing millions this winter.

Tesco embarked on what it plans to be its biggest-ever food collection, with the initiative launching in Express stores yesterday and in large stores from Thursday.

Customers have until the evening of 21 November to donate long-life food in store, which will go towards FareShare and the Trussell Trust.

Tesco described this year’s collection as “more vital than ever” with vulnerable groups facing an unprecedented need for supplies.

Last year Tesco donated more than three million meals worth of food during the collection and it will again be topping up the value of donations with an additional 20% in cash.

“Every year Tesco customers are incredibly generous,” said Tesco’s head of community Claire De Silva. “But this year is not a normal year, and the two charities we work with need to provide more food than ever this Christmas.

“A single tin of tuna or vegetables may not seem like much to give, but if enough people make a small donation then together those donations can make a really big difference to people who need our help this winter.

“Tesco will top up the value of every tin, packet or carton given with an extra 20% in cash, helping food banks across the UK keep the lights on this Christmas and FareShare vans to deliver food to people who really need it.”

Meanwhile, Asda today announced it will donate one million meals before Christmas to support vulnerable people across the UK.

The initiative will see extra meals given to food banks, charities and community groups across the country over the festive season.

The majority of the meals donated will come from Asda’s back-of-store donation scheme and depots, which sees non-chilled fruit, vegetables, eggs and bread products go to local foodbanks, charities and community groups.

Asda’s 387 Community Champions will also make donations on behalf of the store to their local food banks.

Asda said it was asking customers to pick up an extra item while they are shopping and donate to supermarket food collection trolleys. These food donations will then be distributed to local foodbanks to support the most vulnerable this Christmas.

The supermarket is also launching a ‘text to donate’ service, giving customers the option to donate £3 to the Trussell Trust by texting Asda to 70085.

“We understand that for people in vulnerable circumstances Christmas can be an extremely stressful time of year, which is why we are pleased to be able to do our bit to help out,” said Asda chief customer officer Anna-Maree Shaw.

“We know that before Christmas, food banks and charities see an increase in demand and this year it is likely to be greater than ever. We are extremely proud of the great work our Community Champions do to help their communities and thankful to our generous customers whose help will make a real difference to people in their local area.”

Last week The Grocer reported how FareShare had launched an industry appeal for surplus food and warehouse space as it fights a second wave of hunger over the Christmas period.

The charity revealed it was in talks with the government about a new purchasing programme that would see it buy up millions of pounds worth of food direct from suppliers to tackle the crisis.

The charity told The Grocer it was witnessing a major spike in demand of as much as 70%, as the second lockdown increased the economic impact on vulnerable groups.

FareShare CEO Lindsay Boswell says: “The effects of the pandemic are being felt far and wide, with more people than ever turning to their local charities and community groups for help because they’re unable to feed themselves and their families. Demand for food from FareShare has more than doubled over the past few months, so if you are able to donate just one item it will go such a long way in helping us support the thousands of people in need across the UK.”

The Trussell Trust’s network of food banks is expected to give out six emergency food parcels to people in crisis every minute this winter.

CEO Emma Revie said: “The pandemic has shown the power of what happens when we stand together in the face of adversity and how much people are willing to give in order to support their local community.”

Meanwhile Sainsbury’s is set to ramp up its Brighten a Million Christmases initiative, which is made up of a £5m fund for more than 1,150 charity partners to help fight food poverty between 1 and 14 December. The scheme also encourages shoppers to donate food and other essential products or cash in stores and online. Sainsbury’s will match every donation and it hopes to raise around £8m for the cause in total.