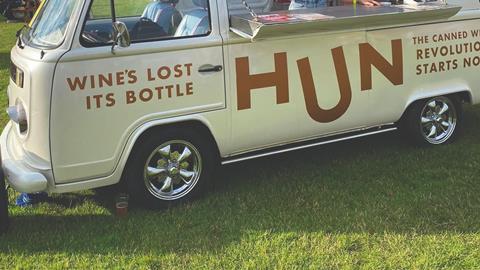 As brands Hun and Babe struggle, is there a future for canned wine in the UK?

Just last year the millennial-marketed canned wine brand was riding the high of smashing its £400k crowdfunding target within 72 hours – with the backing of fmcg veterans, including Waitrose executive director James Bailey and Andy Shaw, the former CEO of beer at BrewDog and MD of Red Bull UK. Now, it has been sold to its supplier Origin Wine after falling into administration.

A letter from Hun founder Mark Woollard to Seedrs crowdfunding investors, seen by The Grocer, revealed that an “extremely tough” festival season in 2021, resulting in a “huge cashflow issue”, had necessitated calling in the administrators.

Meanwhile, competitor Babe has been canned by AB InBev’s ZX Ventures arm. The brand – which was founded in 2016 by Instagram influencer Josh Ostrovsky, and David Oliver Cohen and Tanner Cohen (writers of Twitter account White Girl Problems) – quietly exited the UK at the end of 2021, after being “analysed against a variety of performance indicators”.

But it’s not all bad news for canned wine. Britain’s biggest-selling wine brand Hardys, for instance, this week unveiled a trio of canned drinks. Boutinot Wines, too, is launching a canned trio under its Italia brand for summer, while sparkling brand Canvino last month secured a major Tesco listing. And Origin Wine founder Bernard Fontannaz says, despite its recent difficulties, Hun has a “long-lasting, bright future ahead”.

So, why do drinks suppliers keep hedging their bets on canned wine?

The main motivation for drinks suppliers moving into canned formats is luring a younger audience. According to Fontannaz, the young consumer poses “a challenge for the wine industry to get them into a wine rather than RTDs, or other alcohol-based drinks”. However, cans are the “perfect format for convenience… a sector which is growing dramatically”.

Woollard agrees. He last year predicted the canned wine sector was “set to grow exponentially thanks to its convenience and eco-credentials that really resonate with millennial wine drinkers”.

As aluminium cans are significantly lighter than glass bottles, it requires less fuel to transport them. Less energy is also needed to recycle them compared with glass, which is why they tend to be considered greener.

Plus, while older wine drinkers might turn their noses up at canned wines, younger consumers have “no preconceived ideas” and are, therefore, more willing to try them, says Fontannaz.

He believes the reason Hun ran into difficulty last year had nothing to do with the product itself, but everything to do with context. “Nobody could foresee Covid, and as it happened the business plan, and certain undertakings and investments, were based on some relatively big exposure in certain music festivals, which were cancelled, through no fault of anybody.”

But now that festivals are set to resume this summer, the outlook for Hun – which is “very much a summer offering” – looks much brighter.

Canvino, too, is relying on the recovery of the on-trade – along with its new Tesco listing – to buoy sales. Its canned wines will be on sale at “numerous venues, stadiums, racecourses, events and festivals throughout the summer”. And Hardys’ cans surely have the brand power to sell through the on and off-trade this summer.

While there are sceptics, this wouldn’t be the first time an unconventional wine format has defied expectations. Take Cup-a-Wine, whose plastic cups filled with a single serving of wine were in 2009 rejected by the entrepreneurs on Dragons’ Den. Despite being dismissed as “tacky”, the invention was snapped up by Marks & Spencer to become its hugely popular and award-winning Le Froglet wine.

And wine suppliers are much less afraid to explore alternative formats these days. When in Rome, for instance, last month launched a paper wine bottle into Ocado. Canned wine brand Nice last year moved into bag-in-box to offer “flexibility and convenience” to its consumers.

Convenience and sustainability seem to be the main objectives for luring millennials. Indeed, Origin Wine is currently working on Hun’s branding to play up its vegan and Fairtrade credentials. Unfortunately, with festivals cancelled last year and a captive audience lost, canned wine just didn’t build the momentum brands hoped for.

In 2022, things look a lot more promising. Suppliers’ best chance of success is to partner with festivals and suitable events this summer to get their drinks into the hands of those younger shoppers as soon as possible. As Fontannaz says: “you’ve got to go and fish where they swim”.