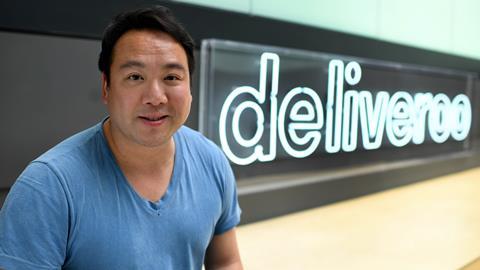 Deliveroo’s Will Shu is enthused by ultra-fast dark store grocery. Now what?

There was relieved tone in Deliveroo boss Will Shu’s presentation to analysts and investors this morning, on the release of the courier company’s half-year results.

Little wonder. Yesterday, stock exchange filings revealed Delivery Hero had built a 5.1% stake in Deliveroo, sending its share price to the highest point since its frankly disastrous £7.6bn IPO back in March.

And today, despite posting a large loss for the first half of the year (a pre-tax loss of £104.8m, albeit an improvement on £128.4m a year ago) the company had grown ahead of expectations with demand resilient despite Covid restrictions easing. Revenues have shot up, and gross transaction value has more than doubled in the UK.

“After a disastrous start to life as a public company led some wags to denote takeaways platform Deliveroo ‘Flopperoo’,” says AJ Bell financial analyst Danni Hewson, “the company appears to be flipping things around and clawing back a little credibility.”

While it’s saved some face, and “kick-started its rehabilitation” as Hewson says, Deliveroo is still under pressure. In particular from the on-demand rapid grocery players like Getir, Gorillas, Dija, Weezy, Zapp and Fancy.

For one, grocery is increasingly important to Deliveroo’s future, with a whole section of this morning’s presentation dedicated to it. And it’s made great strides. Grocery is contributing 7% of Deliveroo’s gross transactional volume globally.

In some ways, partnering with stores is a huge advantage. The model is “much more scalable” Shu explained. Thanks to partnerships with major retailers like Waitrose, Co-op, Morrisons, Sainsbury’s and Aldi – which take, with independents, the total number of grocery stores on the platform to 4,600 – buying groceries on Deliveroo is a reality for 70% of the British population, up from 36% at the end of Q1 2020.

The ultra-fast players by comparison are limited to dense population centres, only beginning to extend out of London.

But boy are they fast.

“Deliveroo is tied to its retail partners and their traditional methods to pick and fulfil orders,” says Chris Elliott, head of market insights at Edge by Ascential. “Consumer demands are now driven by speed and ultra-rapid delivery firms are raising the bar on the current expectations set by leading grocery chains, as well as existing intermediaries like Deliveroo.”

Shu – who admitted today to trying most of the rapid delivery apps in London – is certainly not blind to this. “On the inventory management side, having a dark store with high levels of precision is critical to preventing issues like stock outs. And because you’re in a dark store the pick and pack is more streamlined and faster,” he said, “From a consumer perspective the proposition is really good.”

Furthermore, the supermarkets Deliveroo depends upon are beginning to make their own moves into ultra-fast. Carrefour which has been rolling out Deliveroo delivery from stores across Europe over the last year, last month announced it had acquired a stake in Cajoo, a 15-minute grocery delivery service that had only been founded in February.

So what does Deliveroo do about it? There are strong indications it won’t be nothing.

Setting out how to boost grocery unit margins, Deliveroo will work on “improving selection and inventory management” it said today. Something tricky to do when fulfilling from a supermarket.

Clues too in Deliveroo’s hiring this week of former Amazon exec Devesh Mishra as chief product and technology officer. At Amazon, Mishra was supply chain VP, managing “one of the largest inventory pools in e-commerce globally”.

The biggest signal Deliveroo could be planning its own dark stores though, is simply Shu’s evident enthusiasm for the model. Compared with Ocado boss Tim Steiner, who has repeatedly dismissed the threat of Getir et al, Shu was practically gushing about the model today. It “makes a lot of sense” he said, adding that “any time I see something that is potentially good for a consumer that a different business model is producing, I’m going to look at it very closely.”

Not too long ago, delivery within 35 minutes seemed ridiculously fast. But the definition of quick and convenient has now changed. By the sounds of it, Shu’s Deliveroo is looking to change along with it.