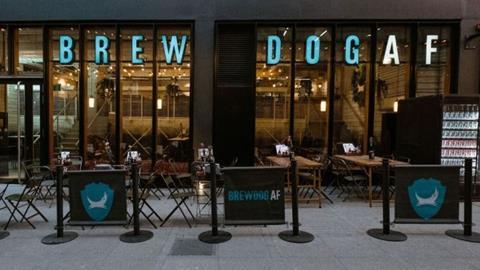 If anyone can make an alcohol-free bar work, BrewDog can

BrewDog has claimed a ‘world’s first’ by opening a totally alcohol-free bar in central London, offering a whopping 15 taps of alcohol-free craft beer on draught, including a swathe of never-before-tasted booze-less brews. Punk? Hardly. But shrewd? Definitely.

One quick point to note: it’s actually not a world first. At least if we’re being pedantic. That title was claimed by Sainsbury’s in July last year when it opened its own alcohol-free pub, The Clean Vic, over a weekend on New Oxford Street. Before that, it was claimed by The Virgin Mary in Dublin, in May. There may even be others.

Still, BrewDog’s venture is undeniably more interesting than Sainsbury’s. And not just because BrewDog’s foray into alcohol-free comes wrapped in the usual bouquet of controversy that surrounds this brand (November saw it rapped by the ASA for a poster with the catchphrase ‘sober as a motherfu’, with BrewDog quipping the marketing budget ‘only stretched to 16 letters’. The watchdog, needless to say, wasn’t amused.)

Firstly, this isn’t a pop-up. Rather, this is a bona fide attempt to make an entirely alcohol-free bar stand on its own two feet, by a serious, big-money operator with the means to make a sizeable investment in growing it.

BrewDog is offering unlimited refills throughout January, which suggests it’s more interested in finding out how much alcohol-free booze people will actually drink on a night out, and guaging whether the concept is scalable than making any money – for the moment. Not to mention it’s a great playground to test out booze-free NPD – which is increasingly looking like a priority for the brewer.

No business has tested the category in the on-trade with such guts to date. Because while low & no is growing at immense pace, it is still small, and there are many questions to answer about consumption habits.

If BrewDog decides the appetite is there, rolling out further alcohol-free bars could be incredibly fruitful. And not just because BrewDog won’t have to pay any licensing fees and the drinks are duty-free. An alcohol-free bar could also play well in global markets where alcohol isn’t consumed so voraciously or those facing stringent regulations.

Most importantly, BrewDog would have critical first-mover advantage if it acts quick (even if it isn’t technically the world’s first).

A nationwide chain of alcohol-free craft beer pubs may still sound like a long stretch right now. Low & no is still a comparatively tiny segment of the overall alcohol category. And there are certainly areas of the country where it might not play so well.

But in the long term, all bets are off. To think five years ago that low & no would have reached its current scale would have been laughable. Today, the likes of Heineken 0.0% rank among the UK’s fastest-growing lagers, and a month doesn’t go by without a major brand announcing the launch of its own alcohol-free player – just last month saw brands as diverse as Thatchers, Gosnells and even Dalston’s Soda join the fray.

BrewDog could be on to something big here. Let’s not forget it was the first craft beer brand to truly crack the mults (Punk IPA is currently the UK’s third highest-selling ale). James Watt & co could well be the ones to take low & no to its next frontier.

William Reed – the publisher of The Grocer – has launched a new trade show exclusively for the low & no drinks category. For more information visit low2nobev.com.

Daniel WoolfsonDaniel is The Grocer’s food and drink editor and is responsible for our product coverage across all categories.

Daniel has written about food and drink for the majority of his career: prior to joining The Grocer in 2017, Daniel covered food and drink news on pub industry title The Morning Advertiser, and wrote features for VICE magazine.