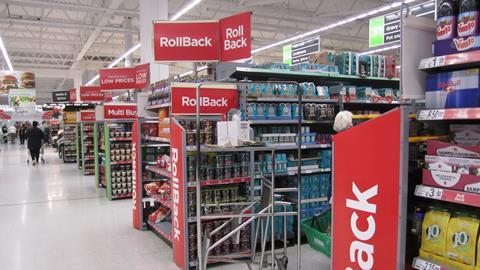 Supermarkets’ price cuts put them on collision course with suppliers

The government doesn’t need the Bank of England to provide financial forecasts at the moment – the supermarkets are doing it for them.

Today Morrisons became the latest retailer to announce it was cutting the prices of hundreds of products across its stores, with CEO David Potts pledging the reductions to help cash-strapped Brits were “here to stay”.

It represents the latest in a series of moves by the mults to reset prices ahead of what they clearly think will be a long and drawn-out recession. A trend first identified by The Grocer in June when it emerged Tesco was planning to slash prices on hundreds of products and extend its Aldi Price Match, as part of a fundamental shift towards everyday low pricing.

That has set the tone for what has followed. Last week Asda said it was throwing £100m at price cuts and even reviving its ‘Pocket Tap’ ads.

The big supermarkets may have enjoyed an unparalelled boom during lockdown. But as we noted in the summer, they are desperate not to repeat the mistakes of the last big recession after the banking crash of 2008/9, which saw the rise of the German discounters as powerful new players in the UK.

“The last time the UK faced such economic challenges, albeit a different context in the light of the great financial crisis and the subsequent Osborne austerity programme, the big four were found largely to be sleeping at the wheel,” says Shore Capital analyst Clive Black. “The outcome was collective carnage for management, earnings, dividends, returns and asset values.”

But there is much more to the latest cuts than just a fear of repeating the mistakes of yesteryear.

The supermarkets are also desperately worried about the lethal cocktail of shopper fears over safety and lack of economic confidence, which threatens their footfall, just when their portfolios had begun to look bombproof compared with the devastation being caused elsewhere in retail.

Morrisons’ cuts will see 400 everyday products like fruit & veg, meat and poultry and cereals, slashed in price. Whether that will be enough to tempt shoppers back to pre-coronavirus levels will depend on whether its claim of being almost a quarter cheaper than previous prices stands up to long-term scrutiny.

That is quite some claim, just as is Tesco’s commitment to match Aldi, which says it will never be beaten on prices, and Asda’s commitment to “thousands” of its own reductions. Asda had already “rolled back” prices, which were supposed to be staying back, yet it has still struggled to keep pace with the discounters.

And it again raises questions about who will pay for such a pricing reset. Will supermarket shareholders have to lower their expectations to help retailers feed the nation in our times of strife, or will it be suppliers who end up picking up the tab and facing their own winter of discontent?

Last week The Grocer revealed suppliers’ confidence was at rock bottom, according to an FDF poll, with companies reporting a huge loss in NPD and a major contraction of ranges.

Alarmingly, more than 40% of companies reported increased import costs, caused by Covid, which will put them in a less than optimal position when supermarkets come calling for price reductions.

And all this with the outcome of Brexit waiting in the wings, with talks on a trade deal currently on a knife-edge and the real prospect of inflationary food shortages and soaring import costs a matter of months away.