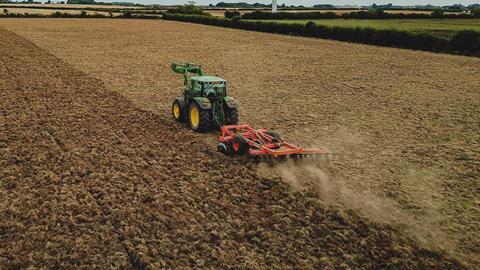 Growing fruit and vegetables is thirsty work. Very thirsty. Global agriculture accounts for 70% of all water use, according to the World Bank, but unfortunately there is increasingly little to go around.

The UN projects a 40% global water shortfall by 2030, meaning much food production faces the very real threat of running dry.

In the UK, the food industry is awakening to the threat. Today, Wrap launched a new ‘Water Roadmap’ to “improve quality and availability of water” in 20 regions and work towards sourcing half of the UK’s fresh food from areas with sustainable water management by 2030.

“Given the necessity of water to produce our food and drink… it is vital as an industry we set a goal for action,” says Karen Fisher, head of climate action strategy at Wrap.

Tesco, Aldi and Hilton, as well as 60 other organisations, are already signed up. And many businesses, of course, have commitments on water already. Coca-Cola, for example, has pledged to reduce its water use in manufacturing by 20% by 2025, but as Ruth Cranston, Sainsbury’s group head of corporate responsibility and sustainability points out: “We have more to do.”

Britain’s supply of fruit and vegetables, in particular, is hugely reliant on water-vulnerable regions such as Spain and North Africa, meaning without action winter strawberries and tomatoes may soon be a distant dream. While alternative sources could always be found, this will only mean higher prices and potentially disrupted supply, not to mention competing with other parties far more vulnerable than Britain.

It would be wrong, however, to assume water scarcity is only an issue troubling food abroad. Even in England, the amount of available water could fall by 15% by 2050 if it continues on the current path, and rivers could lose up to 80% of water in the summer by the same date.

And this is not just about keeping plants wet either. Water scarcity is threatening biodiversity and its essential role in carbon removal, water retention and flood mitigation. Pollution, meanwhile, is devastating river health with consequences for plants, animals and humans.

Water may not be the most exciting issue in the headlines right now, but it’s certainly one of the most important. Let’s hope today’s roadmap is the first step on the right path.