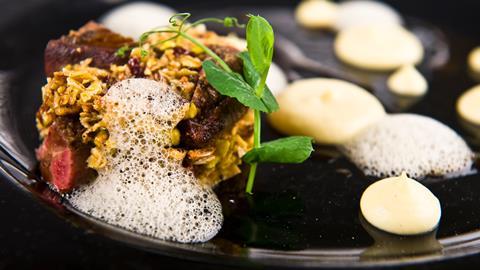 Why the frozen aisle is the new home of haute cuisine

Remember those Kerry Katona adverts for Iceland? Its management team would probably rather you didn’t. A former Atomic Kitten shoving chicken skewers into the pained faces of her guests is no longer an image they want to cultivate. But at that time, the ads pretty much hit the nail on the head in terms of frozen food perceptions. If your idea of a party was dragging a frightened-looking Jason Donovan towards a selection of hors d’oeuvres – see Iceland’s 2008 festive ad – then frozen food was the place for you. Cheap and cheerful was its selling point. Sophisticated it was not.

How things have changed. Iceland, for one, has swapped Kerry Katona for campaigns touting its environmental and sustainability credentials. Now even Waitrose – the bellwether of middle-class Britain, no less – is investing heavily in frozen food. Yesterday, it announced the launch of a premium own-brand frozen meal range that includes such gastronomic fare as a Keralan seafood curry and king prawn & miso ramen. The Italian-inspired pork belly is slow cooked ‘sous vide’ for eight hours. And no, there’s not a prawn ring in sight.

The ‘five star’ frozen range isn’t just a shot in the dark. According to Waitrose, searches for frozen ready meals on its site have soared 500% so far this year compared with 2018. Granted, that may be from a small base and searches don’t always equal sales. But take-home sales data confirm it’s a hot area. Last year, frozen bounced back from years of decline to boast a 6.1% increase in value [Kantar Worldpanel 52 w/e 28 January 2018]. More recent sales data suggest it is continuing on this upward trajectory.

That’s been down to some serious PR efforts on the part of the industry. The likes of Iceland and Birds Eye have worked hard to tackle the misconception that frozen is somehow less healthy and wholesome than fresh. But it’s also been a result of a change in the frozen offer to reflect what modern consumers want. That’s especially obvious in the case of frozen ready meals. No longer are they dominated by TV dinners that wouldn’t look out of place in the 1970s. Instead, we have brands like Deliciously Ella, Cook and By Ruby – a frozen meal delivery service that touts its ’all natural’ credentials – making their mark on the scene. Snobbery around the iced meal has all but disappeared. Frozen is now destination for the high-end culinary fare.

So Waitrose’s latest investment in the aisles may prove to be a winner. Who knows, it may even be enough to convince Jason Donovan to give frozen food another chance.