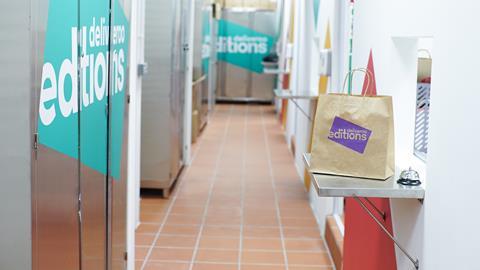 With an IPO in the offing, what will Deliveroo do next?

It’s been on the menu for years, but on the weekend Deliveroo confirmed a “potential Initial Public Offering” of the company for the first time. With a float this year pretty much certain, the question becomes: what does Deliveroo do next?

After a rollercoaster 2020 – which started with lay-offs, a Competition & Markets Authority investigation and the admission the company would “fail financially” without Amazon’s support, but ended with 36 grocery partnerships and its ambition to double its rider count from 25,000 to more than 50,000 realised – Deliveroo has begun 2021 bullishly.

Earlier this month it revealed plans to expand its service into 100 new towns and cities in the UK this year, and extend the reach in the 150 towns already served. This will give four million more Brits the ability to access food on its platform.

Such big stated plans of a company heading towards an exchange listing probably won’t surprise anyone, but predictions about its post-IPO plan might. Major moves will soon follow, reckons former Amazon executive Brittain Ladd.

“The future of Deliveroo is much bigger than delivering food,” he says.

In his view, Deliveroo will start to compete directly with the supermarkets and restaurants that have helped its (often shaky) rise to date.

Deliveroo has had its Editions format for some time. These are its own so-called ‘dark kitchens’, which it rents out to restaurateurs to create Deliveroo platform-only brands. Editions is headed for further expansion, Deliveroo said on Sunday as it announced the completion of a new £133m Series H funding round from existing investors (valuing it at £5.2bn). The next step, say some pundits, is for Deliveroo to use its masses of data to cherry-pick the most successful brands and operate its own versions. Indeed, Deliveroo has possibly already let slip this ambition.

“Deliveroo is going to invest heavily in dark kitchens, hiring five-star chefs and curating the most popular recipes,” Ladd says. “I see no reason for Deliveroo to continue to deliver food when they can cook and deliver their own food to customers which will increase their margins and profits.”

Further expansion of on-demand grocery – “a service that has grown rapidly over the last year”, Deliveroo says – is also underway. While the courier firm is helping supermarkets meet incredible demand for online grocery today, tomorrow it could become a direct competitor, Ladd predicts.

“I’m convinced Deliveroo is going to invest in opening micro-fulfilment centres,” he says. “This will allow Deliveroo to pull grocery fulfilment from stores and instead automate fulfillment using their own MFCs. I also anticipate that Deliveroo will eventually create their own private-label convenience and grocery products.”

With the might of key Deliveroo investor Amazon, and the bold but not insane suggestion Amazon could acquire Tesco, the rug could be pulled from under the big four’s feet in a few swift moves.

In the immediate term, Deliveroo faces some significant challenges. Through the pandemic “a lot more local delivery apps for groceries and take-aways have popped up,” says Rebecca Crook, chief growth officer at Somo. “And while they only represent a small share of the market, they do pose a threat.

“Another problem for Deliveroo is that with supermarket brands investing so much in their logistics and technology, it’s hard to see a place for them right now,” she adds.

Currently Deliveroo is “riding the wave created by the pandemic” says Julian Skelly, head of retail at Publicis Sapient. Undoubtedly, demand for takeaways will diminish when eating out returns.

“As the world starts to turn the corner, Deliveroo will be considering how they capitalise on their growth,” Skelly says.

This winter could we be ordering a dark kitchen-made hot dinner from a Deliveroo-owned restaurant, which arrives with a Deliveroo-branded tub of ice cream and Deliveroo own-label groceries for tomorrow’s lunch?

Whatever Deliveroo does next, for the sector, investors and Deliveroo itself, as Skelly puts it: “The ride will be interesting!”