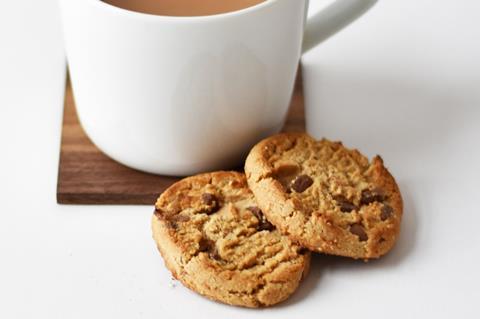 There’s no sign of the sugar police breaking down biscuits’ door. Brits are going bonkers for biccies – and the sugarier the better. Sweet lines accounted for more than half of the £64.2m growth in the category in the past year.

A look at the best-performing sweet biscuit brands tells you all you need to know. Pladis’ Flipz has managed to deliver £11m, the highest absolute gain in the category, with its chocolate and caramel-coated pretzels. And Bahlsen has gained £2.3m with its indulgent range that promises to be “more chocolate than biscuit”.

By contrast, the fastest-falling brand in the top 20 is a better-for-you line. Go Ahead shed just shy of £4m after its Goodness Bar faced delistings (though it’s worth noting its cereal bars gained £4.6m). Nutella B-Ready, last year’s rising star, has also fallen from grace despite its ‘less than 120 calories’ claim. Nielsen attributes the £5.2m decline partly to lower discounts.

“The growth of healthier and cereal biscuits has slowed, with consumers consuming fewer snacks for health reasons for the first time since the 2008 recession,” says Simon Browne, managing director of Burton’s Biscuit Company.

Instead, they’re looking for biscuits to provide a bit of indulgence. “While consumers are increasingly health-conscious, when they do look for a treat, they’re often looking to maximise their experience through products that taste great and that they feel good about,” according to Susan Nash, Mondelez trade communications manager. Pladis also stresses that “taste is paramount”.

Still, brands clearly feel that healthier lines are worthy of investment. While Burton’s says they are waning, it points to the 100-calorie portions of its Jammie Dodgers – up £1.8m – as a success. The supplier has also extended its Maryland portfolio with sugar-free Choc Chip cookies,and added “portion-controlled snacks” Oaty Bars and Chocolate Cookie Bars.

Another supplier going down the portion control route is Pladis, which has relaunched McVitie’s Minis to fit the government’s Change 4 Life guidelines. Meanwhile, Mondelez has innovated in the healthy space with its new Cadbury Brunch Bars containing added protein and superfoods.

For biscuit giants, the real squeeze seems to lie in the middle ground: everyday biccies that are neither indulgent nor healthy. Cadbury Biscuits shed £3.7m this year – the highest loss after Go Ahead. Maryland fell 5.6%, while McVitie’s shed £2m.

Price is one factor behind the latter’s performance. In October, The Grocer reported McVitie’s Chocolate Digestives had suffered a 13% drop in value [Nielsen 52 w/e 10 August 2019]. Nielsen said sales of the biscuits had fallen when they weren’t on promotion. That comes as a growing number of shoppers turn to cheaper own-label versions of everyday biscuits.

Over in cereal bars, it’s a slightly different story. Here, healthy lines drove the extra 1.7 million units that went through the tills in the past year. Go Ahead had the highest value increase of the top 10, up £4.6m. That came after the January launch of its Nutty Crunch line, which contains fewer than 100 calories per bar.

Belvita wasn’t far behind with a £3.8m gain. Owner Mondelez points to the health-led innovation of the past year as one factor. In June, it launched the two-strong Belvita Seeds & Berries range, including ‘superfood’ ingredients such as chia seeds and blueberries. And it unveiled Belvita’s first reduced sugar variant in May.

Nielsen says Belvita’s wholegrain Softbakes lineup has been a standout performer of the year. “It has now become the largest part of the Belvita portfolio, overtaking the core breakfast biscuits range,” says Nielsen analyst Steven Hansell.

Health claims also carry weight in savoury biscuits. Mondelez says the growth of its Ritz brand – up 13.9% in value and 15.6% in volume – is due to being “permissable”. The new recipe claims to contain 70% less fat than a standard savoury biscuit “without compromising on taste”.

It’s clearly doing something right. Because Ritz is one of the few brands delivering volume growth in the savoury biscuits market. On the face of it, the total category is faring far better than last year, when it suffered a hefty blow to value. This year, it’s up a substantial £12.1m. However, that uplift is entirely down to price increases – volumes fell by a marginal 0.9%. In the case of market leader Jacob’s, volumes plunged by 6%.

Some are bucking that trend. Take Swedish crispbread specialist Peter’s Yard – up 24.9% in value on volumes up 28%. It has focused on foodie credentials with innovations such as its Sourdough Flatbread range, launched in summer.

So it seems there’s an appetite for many forms of biscuit – from foodie fare to healthy snacks and decadence. Just don’t be the biccie that falls into the no man’s land between. 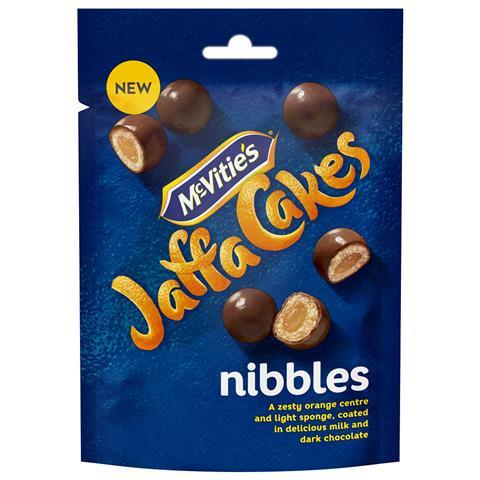 Is it a cake or a biscuit? For the purpose of these pages, the Jaffa Cake falls into the latter territory. But that isn’t the important thing here. More interesting is the stellar performance of this Nibbles variant, described by McVitie’s as a “total game-changer”. Both formats – the £1.50 sharing pouch and 69p on-the-go bag – were designed to appeal to a “new generation” of Jaffa Cakes fans. They seem to be working. Pladis reported sales of £4.6m within the snack’s first six months.