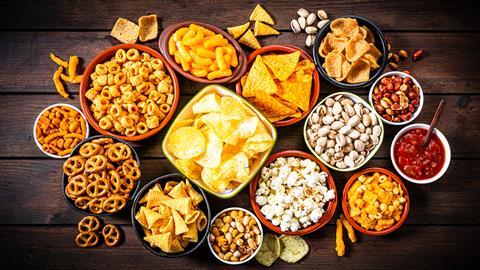 Bagged snacks are as popular as ever, with crisps still our first choice and consumption increasing over the lockdowns. But how do flavour preferences break down over age and location? And how are health and sustainability concerns changing the way we snack?

1. The majority of Brits eat bagged snacks more than once a week 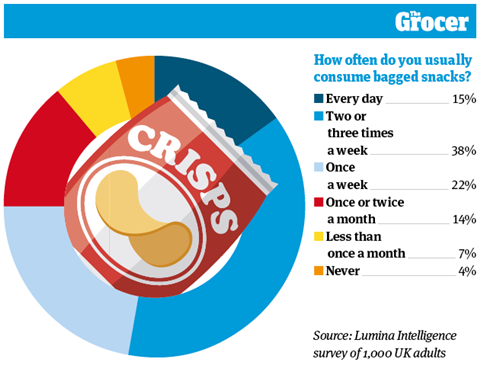 Whether it’s on the go, on the sofa or as part of a lunch or evening meal, crisps, nuts and other bagged snacks are a regular feature of Brits’ diet each week. According to our Lumina Intelligence survey of 1,000 UK adults, 22% of consumers tuck into such snacks once a week, while more than half (53%) eat them even more often. 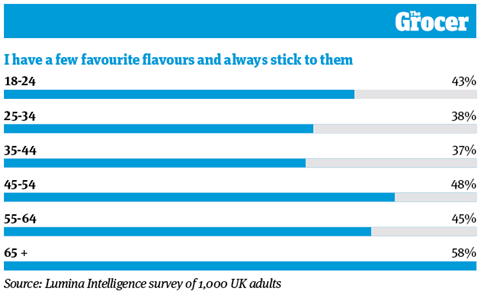 When it comes to snack flavours, it seems British shoppers are creatures of habit. As our research shows, 45% of UK consumers have a few favourite flavours and stick to them. This is especially true of the over-65s (58%), while 35 to 44-year-olds are most likely to try something new. Twenty-three per cent of shoppers in this age group say they always try a new flavour. They are also the demographic most influenced by limited edition launches.

“Consumers are increasingly turning to snacks that can provide them with indulgent flavours”, says Fernando Kahane, senior marketing director, Walkers, at PepsiCo. Kahane says “intense flavour” is a “sought after part of the modern snacking experience”, particularly with younger consumers.

3. Potato crisps are the country’s favourite type of bagged snack 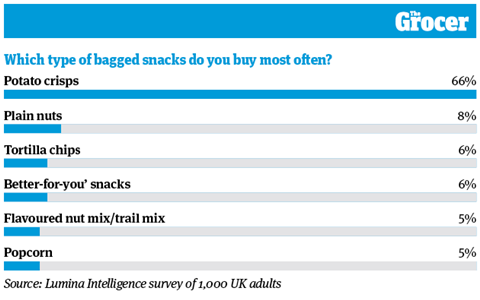 No surprises here. The humble potato crisp is the most popular bagged snack in the UK, with 66% of shoppers buying them most often. Crisps were the most popular choice in all age groups. However, they overindexed with the 45 to 54 demographic (73%).

Citing The Grocer Guide To Snacking 2021, Kahane says crisps are most popular because “enjoyment is the primary driver in around 70% of snacking occasions” and “consumers are unwilling to compromise on taste”.

There was a dramatic drop to the next most popular snack, plain nuts (8%). These were more popular than flavoured nuts and trail mixes (5%), which ranked last alongside popcorn. The latter was more than twice as popular with women (7%) than men (3%).

4. Londoners are more likely to branch out to other bagged snacks 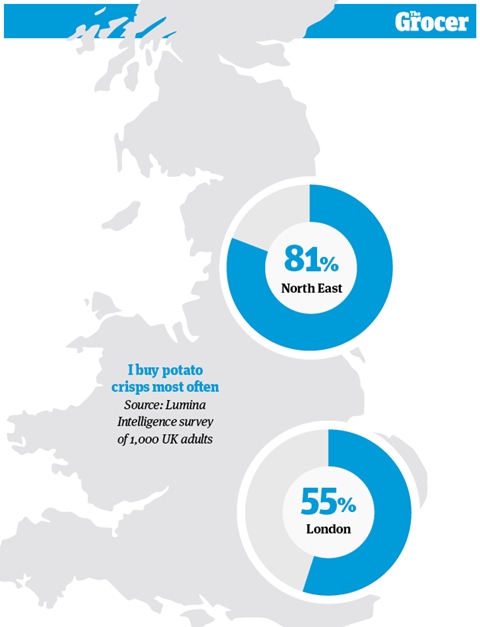 Despite potato crisps being the most popular snack across all regions of the UK, consumers in the capital are most likely to venture elsewhere in the snack aisle. In our survey, 55% of people in London said they bought crisps most often, compared with 81% in the north east. Walkers’ Kahane puts this down to “a greater focus on health and availability of alternatives” in the capital. “London has a higher proportion than the rest of the country of younger, health savvy, lifestyle aware consumers, looking to try new and different snacks”, says Kahane. He says the city’s diverse population also affects the snacking habits of its residents.

5. A quarter of consumers ate more bagged snacks during lockdown 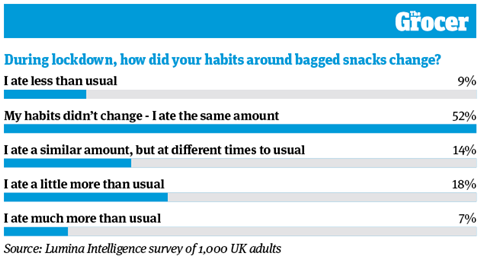 Consumers turned to snacks to satisfy their quarantine cravings last year. A quarter of Brits say they upped their consumption during lockdown, either eating a little (18%) or a lot more than usual (7%). Younger consumers tucked into the most extra snacks, with 34% of 18 to 24-year-olds eating more than normal.

That said, more than half of Brits (52%) stuck to their pre-lockdown habits and ate the same amount. Most snacking occasions also stayed roughly the same, though we saw slight changes in lunchtime and on-the-go snacking, which both fell three percentage points, and evening meal occasions (up by two percentage points). This reflects the 14% of Brits that ate a similar amount of snacks, but at different times.

6. A third of Brits buy both regular and ‘better-for-you’ snacks 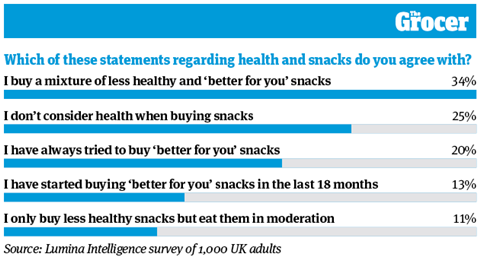 They say the key to good health is a balanced diet. Well, that also looks to be the case within the world of snacking. According to Walkers’ Kahane, consumers are looking to counter “moments of comfort and indulgence” with more permissible options, which could explain why 34% buy a combination of less healthy and ‘better for you’ snacks.

However, as a quarter of Brits don’t consider health when buying snacks, brands and retailers must focus on flavour to attract shoppers to their more virtuous offerings, Kahane believes. “Few shoppers are willing to settle for balanced snacking options that compromise on taste”, he says. “In the ‘better for you’ segment, shoppers are demanding new, exciting flavours that offer something unusual.” 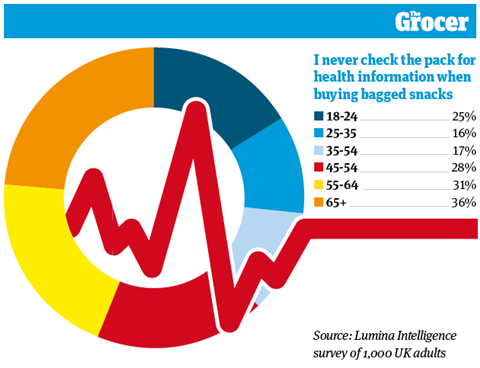 As mentioned in chart six, health isn’t a consideration for a quarter of UK consumers when it comes to buying bagged snacks. This correlates with the 26% of people that never check the pack for health information when browsing the category. Another correlation can be seen in the over-65 age group. The demographic not only shuns on-pack health information the most (36%) but is also least likely to consider health at all when buying into the category (35%).

In comparison, middle-aged consumers appear to be the most virtuous. For example, 19% of 25 to 34-year-olds always read the health information on snacks, while 26% of 35 to 44-year-olds say they have always tried to buy ‘better for you’ snacking options.

8. More than half of Brits recycle their bagged snacks packaging 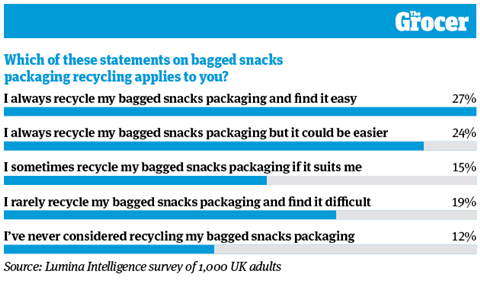 Stark warnings on the effects of the climate crisis are clearly getting through to bagged snacks consumers, as just over half (51%) say they always recycle packaging from the category. Of these respondents, the majority (27%) say they find the process of recycling such packaging easy, while some still think it could be simpler. Walkers is helping to achieve this through its Crisp Packet Recycling Scheme, implemented in 2018. It is also a founder of the Flexible Plastic Fund, which aims to create a better infrastructure for the recycling of flexible plastics collected in stores across the UK.

The demographic least likely to recycle their bagged snacks packaging is 45 to 54, in which 15% of respondents say they have never considered it.

9. In-store promotions are most influential to snacks consumers 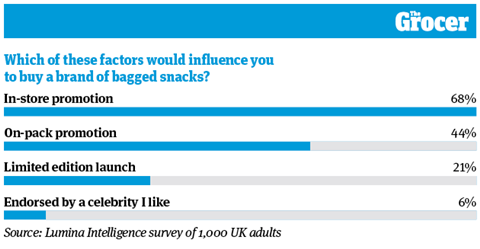 Aside from their favourite flavours (see chart two) it seems consumers are most driven by price when choosing which brand to purchase. As our survey shows, the majority of shoppers (68%) are most influenced by in-store promotions when browsing the snacks aisle, followed by on-pack promotions (44%). Twelve per cent of Brits also select a flavour by plumping for whatever is on offer.

However, brands now have the coming ban on promoting HFSS products to contend with. Kahane of Walkers believes “savoury snacks, in particular, are growing and well-positioned to thrive” amid the regulations, but suggests reformulation as a way to swerve the ban. He cites Walkers’ non-HFSS overhaul of its entire Snack a Jacks brand.

10. Men are more likely to recycle their bagged snacks packaging than women 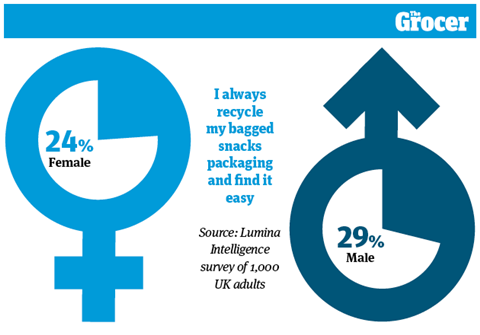 As our survey shows, half of the adult population now recycles their bagged snacks packaging (see chart eight). But one sex is nosing ahead, as men (29%) are more likely to do so than women (24%).

There is also a divide between younger and older consumers when it comes to recycling. The age group leading the way is the over-65s, in which 54% of respondents always recycle their snack packaging, compared with 48% in the 18 to 24 bracket. When asked how important it is that the snacks they buy come in recyclable packaging, more people in the oldest demographic said very important (24%) than the younger age group (18%).